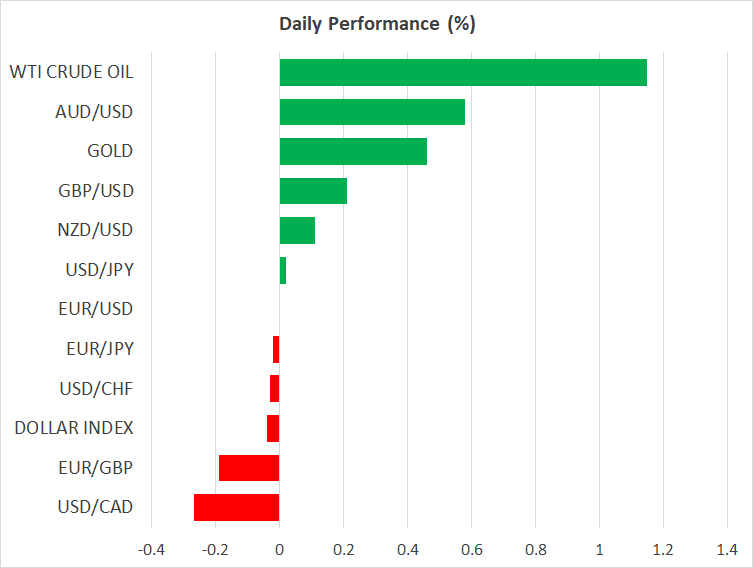 Europe gets its fiscal bazooka; euro pauses for breath

European Union leaders ended a marathon summit on Tuesday with a classic fudge as a compromise deal that significantly waters down the original plan of a €750 billion rescue package finally got the backing of the ‘frugal’ nations. Under the agreement, €360 bln will be disbursed as loans, but only €390 bln will be allocated as grants, down from the initial proposal of €500 bln.

After hitting fresh 4-month highs earlier today, the euro became the victim of ‘buy the rumour, sell the fact’, falling on the announcement, but has since picked up some momentum again to trade nearer $1.1450.

European stocks cheered the much-anticipated fiscal boost for the euro area economy, which has been devastated by the Covid-19 pandemic. Germany’s DAX index soared to the highest since late February, pulling the Euro Stoxx 50 index to a 4½-month peak.

Global shares were also riding high on Tuesday, lifted by the stimulus news not just in Europe but elsewhere too. The Australian government has extended its wage subsidy scheme until March 2021, while in the United States, White House officials are in talks with the Democrats to reach an agreement on a new virus support package.

Adding to the positive sentiment were encouraging headlines for two separate coronavirus vaccines being tested by AstraZeneca and Pfizer. The companies’ latest trial results indicate it’s so far so good for developing a successful vaccine, though the timeline for when they can become commercially available is still unclear. Progress is also being made on a treatment for the virus, with British biotech firm, Synairgen, yesterday saying its drug can reduce severe cases from developing in patients by 79%.

All this buoyed Wall Street to fresh highs, sending the Nasdaq Composite and Nasdaq 100 to a record close as tech stocks regained their mojo, having underperformed in recent days. The S&P 500 hit a 5-month high but the Dow Jones lagged amid some caution for traditional stocks as the earnings releases pick up pace this week. Coca-Cola and United Airlines are due to report their results later today and e-mini futures were pointing to a higher open.

Virus risks and stimulus a boon for gold

With the recent bouts of risk-off proving short-lived, it seems there’s little that can get in the way of the underlying optimism in the markets, which is being fed by expectations that governments and central banks will keep the cheap liquidity flowing for as long as needed. However, the next round of fiscal stimulus in the US could prove trickier than the previous relief bills as both the Republicans and Democrats will have the November presidential election in mind when making their demands.

But time is short and with the negotiations coinciding with the earnings season, the next couple of weeks could be quite bumpy for Wall Street.

In the meantime, the only way is up for gold as the precious metal has not only been benefiting from the recent resurgence of virus cases around the world but also from the super-low government bond yields that look set to stay low even if the global economic recovery doesn’t falter.

Gold has broken above the $1,820/oz level to reach the highest in almost nine years.

An additional source of support for the gold rally has been a weakening greenback. The dollar index slid to 4-month lows earlier today, weighed down not just by a stronger euro but also from a perked-up pound.

Sterling is flirting with the $1.27 handle for the first time since mid-June on hopes that the latest round of Brexit negotiations taking place in London this week will bear some fruit. However, a deal remains far off given the significant differences on several issues and the pound could just be setting itself up for a big fall.

The Australian dollar was another star performer on Tuesday, climbing back above the $0.70 level despite the risk to Australia’s economy from the lockdown in Victoria. The aussie’s bull run was given the green light by RBA Governor Philip Lowe who has yet to express his displeasure at the exchange rate, saying it’s “hard to argue” that the currency is overvalued when speaking earlier today.