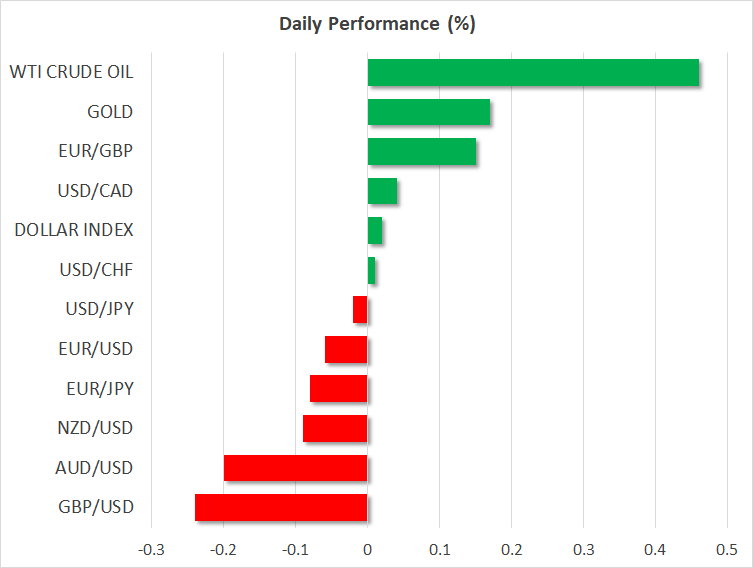 Euro off lows but subdued

The euro was steadier on Friday following yesterday’s volatility in response to the European Central Bank’s highly anticipated monetary policy meeting. The ECB kept policy unchanged on Thursday, though some had expected a rate cut, leading the single currency to briefly surge higher before tumbling to a more than two-year low of $1.1100.

The ECB updated its statement to signal a rate cut as well as other policy changes, indicating all options are on the table. President Mario Draghi underlined the Bank’s dovish tone in his press conference, but markets reacted negatively to suggestions that yesterday’s decision on the revised forward guidance was not unanimous and that there was no discussion about taking any action at the meeting.

Draghi’s comments also helped German bund yields to bounce back from lows, lifting the 10-year yield from a new record low of -0.422% to above -0.40%, as some investors doubted how far the ECB will go with its pledge. Still, with policymakers pretty much confirming that significant policy easing is on the way, any upside for Eurozone government bond yields, hence, the euro, is likely to be limited and temporary.

Dollar looks to Q2 GDP before attention turns to Fed

The euro’s rebound helped the dollar index ease from two-month highs, though not by much. However, the greenback’s new-found strength has not been limited to the euro. Declining expectations of an aggressive 50 basis points cut by the Federal Reserve next week have driven the dollar back above 108.50 yen, while the Australian and New Zealand dollars have slumped to two-week lows as investors bet that both the RBA and RBNZ will cut rates further this year.

Stronger-than-expected data out of the United States also supported the dollar. Durable goods orders jumped by 2% over the month in June, beating forecasts of 0.7% and offsetting some of the recent softer data on the manufacturing sector.

But the main focus later today will be on the advance GDP report for the second quarter, which is expected to show US economic growth slowing from an annualized rate of 3.1% to 1.8%. The data is unlikely to affect the Fed’s decision to slash rates by at least 25bps next week, however, any underlying weakness in consumption or prices in the report could heighten expectations of additional rate cuts beyond July.

Pound hits a Brexit wall, reverses back down

The pound is once again looking at risk of breaching the $1.24 level as new UK prime minister, Boris Johnson’s Brexit plan failed to impress the European Union. EU Commission President Jean-Claude Juncker reiterated the bloc’s stance that the Withdrawal Agreement is not up for renegotiation and the only amendments that can be made are to the political declaration on the future relationship.

However, Johnson is not likely to back down as he insists the terms of the current deal “are unacceptable to this parliament and to this country”. The prospect of a fresh standoff between London and Brussels in the coming weeks does not bode well for sterling as a Johnson government is more likely to make good on its threat of a no-deal Brexit than May’s administration.