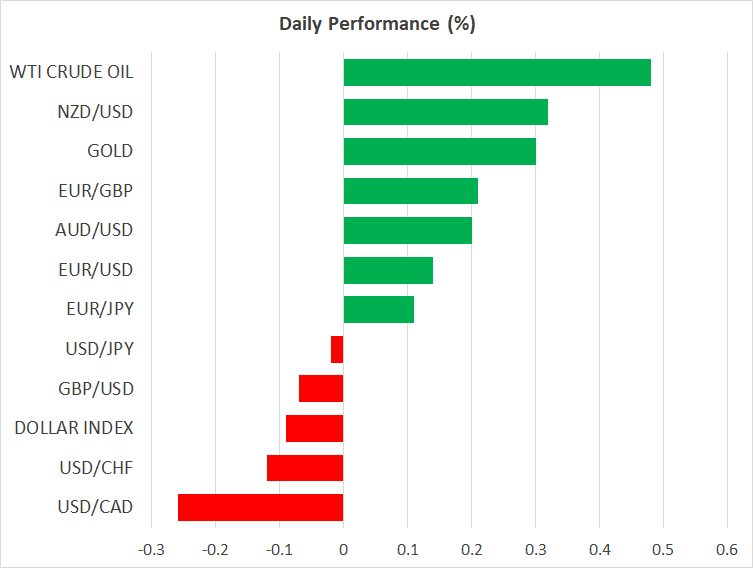 The currency market continues to be dominated by the resurgent euro, which has been liberated from its fiscal shackles after EU leaders took a step closer towards risk sharing this week. Since FX is a zero-sum game in the sense that for every winner there must be a loser, the euro’s fortunes have come mostly at the expense of the dollar, which may also be bleeding because investors are anticipating more action from the Fed next week.

That’s what the bond market is saying at least, judging by the inability of longer-term US yields to get off the floor even though stock markets keep floating higher.

Or it could be that investors are looking at the mystifying rally in the stock market – where the S&P 500 is now trading 1.5% higher on the year – and are hedging their portfolios by increasing exposure to bonds and gold. That would make sense given the news flow lately, with US fatalities unfortunately climbing again as the economic recovery stalls and the fight between Washington and Beijing intensifies.

The US ordered the closure of China’s consulate in Texas yesterday on allegations of spying, drawing outrage from Beijing, which vowed to retaliate. The latest reports suggest China will target America’s consulate in Chengdu.

Congress floats all sorts of ideas, stocks like it

The escalating row between the two superpowers initially spooked stocks, perhaps on concerns that this will only get worse ahead of the November election now that Trump is lagging in the polls, but some encouraging headlines from Congress soon turned that around.

It seems Republican leaders will back off from pursuing a payroll tax cut, which eliminates a thorny item from the negotiating list and may allow for a quicker compromise. Additionally, some Republicans seem open to a short-term extension of the enhanced unemployment benefits while Congress works out the broader deal. This would ensure those who have lost their jobs will continue to receive substantial cheques, keeping consumption supported.

Admittedly, the two key variables the market cares about in this negotiation are the size and speed of the stimulus package, and if Congress can agree to extending jobless benefits while a deal takes form, the speed element becomes less important. As for the size, notice that the discussion isn’t whether a rescue package will come at all, but whether it will cost around $1 trillion (Republicans) or $3 trillion (Democrats).

The bottom line is that a deal of at least $1 trillion is coming, and with the Fed possibly strengthening its forward guidance next week by committing not to raise rates until inflation hits some target, stocks are living the dream.

It’s not just stocks that are partying though, as the combination of a tanking dollar, geopolitical uncertainty, runaway government spending, and rock bottom interest rates as far as the eye can see have also lit a fire under gold prices.

It took a while but bullion has finally gone ballistic, with prices challenging the $1877/ounce territory today. The broader outlook remains bright and new all-time highs above $1920 seem within reach, though some extra caution may be warranted here as nothing goes up in a straight line, except maybe Tesla shares.

In all seriousness though, if the Fed does act next week, that could add more fuel for gold, not just because of the ‘low rates for longer’ theme but also by hurting the dollar.

As for today, the highlights are the weekly US jobless claims, along with earnings results from AT&T, Intel, and Twitter.