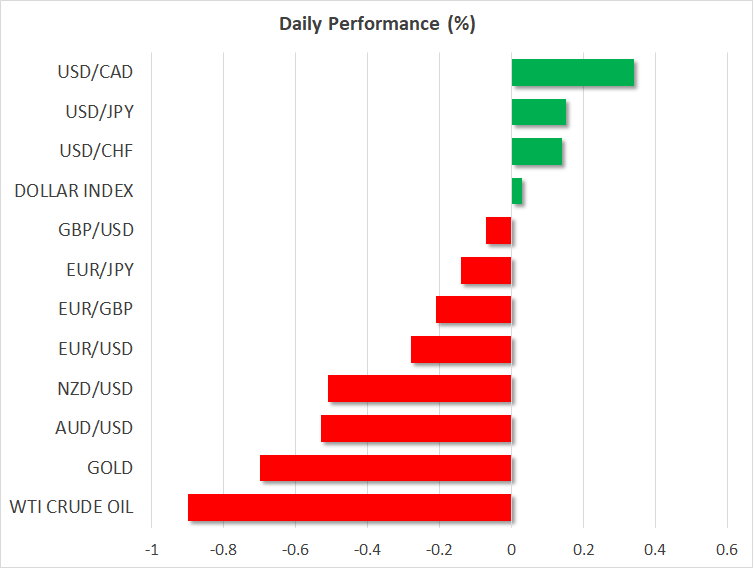 The Federal Reserve left monetary policy unchanged on Wednesday but warned of a “slowing in the pace of the recovery”. Having already implemented a full range of tools in its fight against the coronavirus, the Fed’s decision came as no surprise to markets, though there had been hopes that Chairman Jerome Powell would give investors a taste of what to expect with regards to providing a more explicit forward guidance down the line.

That decision on an updated forward guidance will now likely come in September. The downward path of Treasury yields across the curve since June indicates there is little market stress, meaning the central bank can afford to take its time to review its policy. However, declining yields also reflect rising expectations for additional monetary support as the US economy shows signs of a flattening out of the recovery.

Powell cited high-frequency data in his press briefing that suggested the recovery is losing momentum but did not hesitate to reiterate the Fed’s commitment to shoring up the economy, saying they would “do what we can, and for as long as it takes”. But Powell also turned the spotlight on politicians, underlining once again the need for more fiscal support.

Markets seemed to like Powell’s reassurances as Wall Street accelerated its gains through the course of the session. The Nasdaq Composite was the biggest gainer, adding 1.4%, even as the CEOs of tech giants Apple, Alphabet, Facebook and Amazon, were grilled by lawmakers on various antitrust issues. Despite the heated hearing, there were no new revelations that could prove a game changer in Congress’ investigation into the business practices of the big tech companies.

While this does not necessarily imply the ‘big four’ are out of the woods, it does shift today’s attention entirely on their earnings results. All four tech firms will report their earnings after today’s market close.

Ahead of that, US and European stock futures were trading lower after Asian shares failed to hold onto their earlier advances.

Fiscal stimulus hangs in the balance

Aside from the key earnings releases, traders will also be keeping an eye on the happenings on Capitol Hill and on the upcoming data out of the United States.

With the economic recovery at stake, negotiations between Republicans and Democrats on a new round of pandemic relief are ongoing but the two sides warn they are ‘far apart’. Congress needs to approve an extension to the existing benefits by Friday if it is to avoid a fiscal cliff, but at this point, even a stopgap deal isn’t looking certain.

Should the negotiations extend beyond the deadline without any temporary funding, stocks and other risk assets are likely to take a significant knock. The latest initial jobless claims due later today are expected to show the rebound in the labour market is slowing, potentially heightening fears of a faltering recovery, while GDP is projected to have shrunk by a third on an annualized basis in the preliminary estimate for Q2.

Uncertainty about the looming stimulus decision in Washington could be what’s propping up the US dollar. The greenback is up against all of its major peers today, with the aussie, kiwi and loonie being the biggest losers, having slid to fresh two-year lows against a basket of currencies on Wednesday.

The euro and pound also pulled back after flirting with key levels yesterday. The euro briefly topped the $1.18 level for the first time since September 2018 and cable had a go at the $1.30 handle. While the euro’s rally is being backed by fundamentals, the pound seems to be riding on the broader market moves. 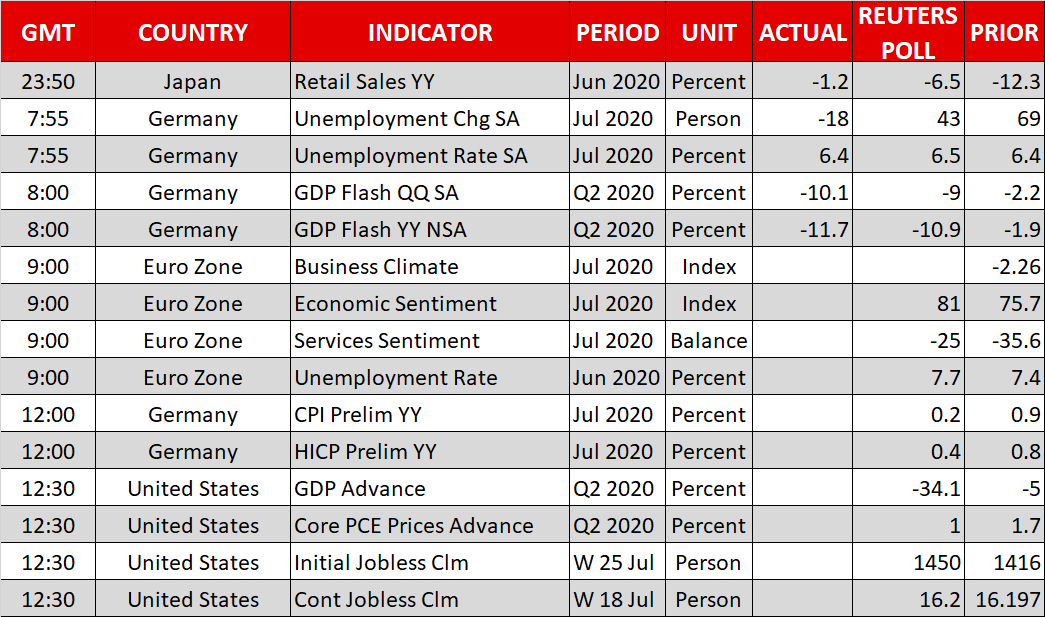