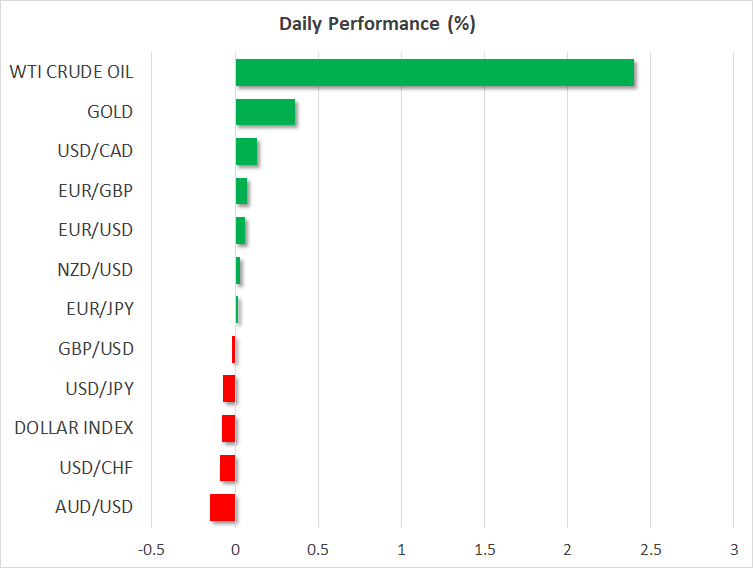 The US dollar held onto its gains on Tuesday after surging yesterday on the back of rising Treasury yields. The yield on two- and five-year Treasury notes hit record lows on Friday as speculation grew that the Federal Reserve would take rates into negative territory after a rally in Fed fund futures signalled investors were pricing in negative rates for early 2021.

But yields recovered yesterday as one Fed official after another pushed back on the idea of negative interest rates in the United States. Fed speakers including Charles Evans, Raphael Bostic and James Bullard put a dampener on the prospect of the Fed adopting negative rates anytime soon, with Evans saying he does not anticipate that being a tool that the Fed would use in the US.

The comments likely disappointed the White House, which has made clear its support for negative rates, but none more so than the president, Donald Trump, who has long been arguing that countries with negative rates such as those in the Eurozone have an unfair advantage over the US, particularly when it comes to the exchange rate.

And Trump may have a point as the Fed’s unlimited QE pledge and slashing rates to zero have barely made a mark on the dollar, which continues to enjoy strong demand due to its status as the world’s reserve currency even as some countries begin to emerge from their lockdowns.

But while rising yields were a boon for the dollar, stocks were not having such a fun day as the Fed’s pushback of negative rates reminded investors that there are limits as to how far the central bank is willing to go to support the American economy during the coronavirus pandemic.

A bigger factor weighing on stocks, however, was the detection of new virus hotspots in China and South Korea over the weekend and on Monday. Wuhan – the Chinese city where COVID-19 is believed to have originated from – reported its first new cases since April 3 yesterday, heightening fears that a second wave of outbreak may be inevitable.

Also worrying is an increase in the virus reproduction rate in some countries like Germany where the lockdown was recently eased. A re-escalation in new virus cases could jeopardize plans by governments to restart their economies after weeks of shutdowns. It could also spell an end to the global recovery in stocks, which have been rallying on hopes that the end of the lockdowns is near.

The Nasdaq Composite has even managed to recoup all its year-to-date losses and yesterday closed at an 11-week high. But US stock futures were mixed today, and it was a slow start to the day in Europe following declines in Asia.

Dollar to take its cues from Fed speakers

In FX markets, the dollar index was back above the 100 level as the euro and the pound continued to drift lower. The yen, however, managed to claw back some of yesterday’s losses, while the risk-sensitive Australian and New Zealand dollars were steadier after sliding earlier in the day. The Canadian dollar also firmed as oil prices were boosted after Saudi Arabia said it will cut its output by another 1 million barrels per day.

The Reserve Bank of New Zealand is due to announce its latest policy decision early on Wednesday and will likely beef up its asset purchases, posing a potential downside risk for the kiwi. But markets will mainly be taking their cues from Fed policymakers as more of them will be taking the podium today, including Randal Quarles and Loretta Mester. Their speeches will be seen as a precursor to Fed Chairman Jerome Powell’s address tomorrow.