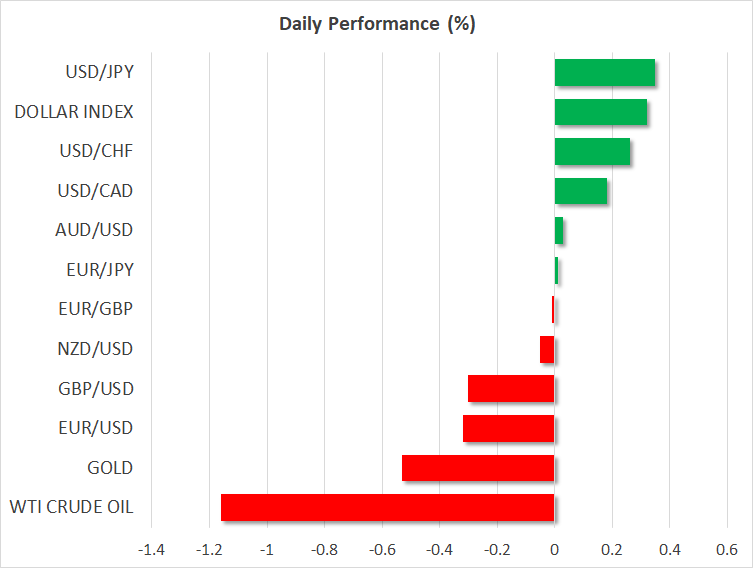 As expected, the Federal Reserve cut rates by 25 basis points (bp) yesterday, citing global growth and trade uncertainties coupled with muted inflation pressures as the driving forces behind the decision. The vote count was 8-2, with the dissenters being Rosengren and George, who preferred to keep rates unchanged.

The dollar soared as traders were assigning a small probability for a more aggressive cut of 50bp, and continued to surge as Chairman Powell began speaking. While he kept the door open for more action if needed, he also emphasized this isn’t necessarily the start of a long series of cuts either, disappointing those who expected the Fed to pre-commit to more easing.

Overall, he framed this cut as an exercise in risk management aimed at cushioning the economy from any global fallout, rather than the beginning of an easing cycle, which was less dovish than markets had expected. Consequently, the implied probability for another move in September dropped to ~60%, from around 80% previously.

Is this a game-changer for the dollar? Most probably, at least in the short term. While more cuts are likely coming, Powell & Co were clear that the pace and scale of more easing will depend on how the trade talks and incoming data evolve, which implies they won’t rush into anything for now. Hence, the case for a lower euro/dollar in the near term has strengthened, particularly if the ECB unveils a powerful easing package in September. On a longer timeframe though, the tide still seems to favor a higher euro/dollar, as the Fed is certain to ‘outgun’ the ECB in a prolonged easing cycle.

The central bank torch will be passed to the Bank of England (BoE) today, which announces its policy decision at 11:00 GMT. This is one of the ‘big’ gatherings, so besides the meeting statement and minutes, the Bank will also publish its quarterly Inflation Report with updated economic forecasts, which Governor Carney will present in a press conference.

The odds seem stacked towards the BoE striking a more dovish tone, perhaps by officially abandoning its tightening plans and adopting a neutral stance, given the weakening UK data pulse and the ever-increasing Brexit uncertainty. Indeed, recent PMI surveys point to a mild GDP contraction in Q2, so it would be shocking if the BoE continues to forecast rate hikes. A more dovish bias would argue for a lower pound, though any downside may not be massive, as markets are already pricing in a ~60% chance for a rate cut by year end.

On the Brexit front, by-elections will take place in Wales today and if the Tories lose that seat, their Parliamentary majority will fall to just one lawmaker – further amplifying the case for an early General Election.

Stock indices retreated after the Fed, with the benchmark S&P 500 closing 1.09% lower even despite some ‘optimistic’ signals in the US-China talks, where both sides described the latest round as “constructive”. While China accepted to increase its purchases of US agricultural goods, appeasing Trump, not much else seems to have been agreed.

As for today, the earnings season continues in earnest, though investors will also pay close attention to the ISM manufacturing PMI for July, given its potential implications for Fed policy. 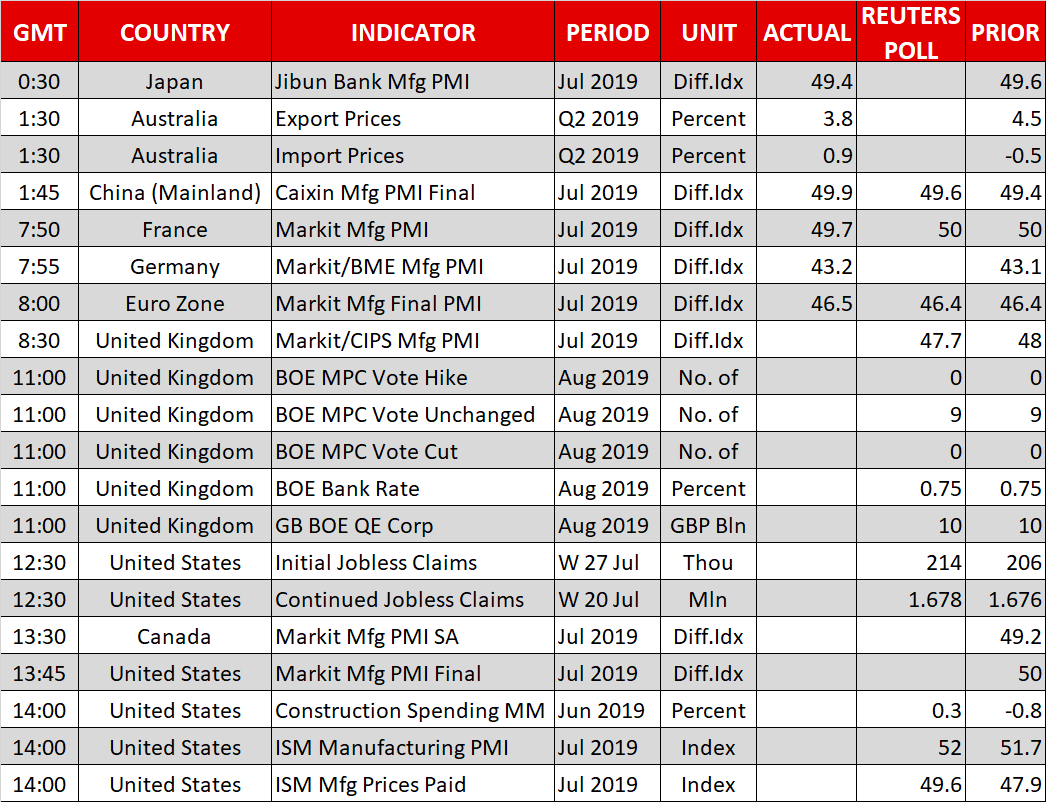