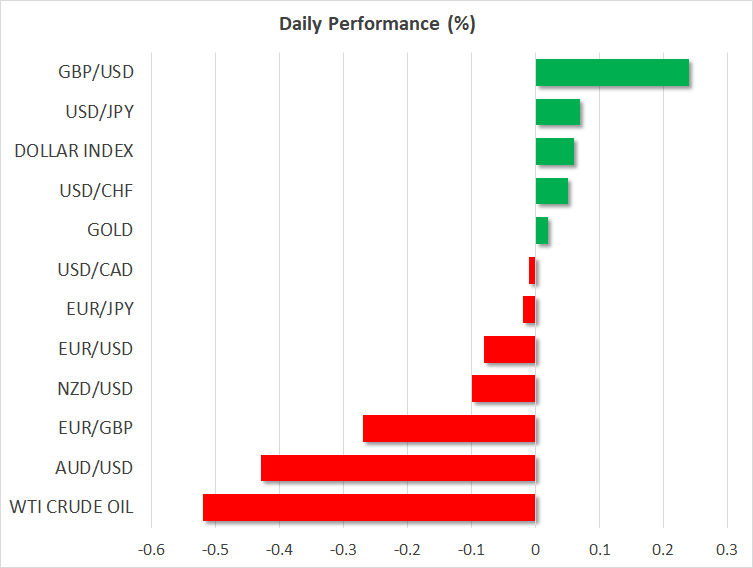 Global risk appetite improved on Monday, with defensive currencies such as the Japanese yen surrendering some recent gains while US stocks recovered lost ground, as investors dialed back concerns about an all-out conflict between the US and Iran. Accordingly, oil prices – which are the ideal bellwether for tensions in the Middle East – closed lower after touching an eight-month peak, suggesting that the perceived probability of future supply disruptions declined a little.

That said, it’s not all rosy. Sure, the fact that Iran hasn’t retaliated yet is encouraging, as it implies the nation may be calibrating an asymmetric response that hopefully won’t provoke actual war with America. Yet, there’s little doubt on anyone’s mind that a counterattack is coming.

Top level Iranian officials have been relentlessly calling for revenge, and from a political perspective, they probably need to retaliate in a manner serious enough to appease domestic public opinion and not appear weak. Meanwhile, the White House has made it painfully clear that any action from Tehran will be met with a disproportional reply.

In other words, it might be only a matter of time until the situation flares up again, which renders the current ‘calm’ in markets especially fragile. Indeed, judging by the losses in the risk-sensitive Australian dollar today and the fact that gold prices remain elevated at 7-year highs, some traders seem to be taking that risk seriously, even if other assets are trading in a more optimistic mood for now.

All eyes on the ISM non-manufacturing PMI today

In the realm of economics, there wasn’t much to speak about. Some reports overnight suggested China will not raise its annual import quotas for some agricultural products to accommodate the increased purchases of US farm goods, which raises some questions about Beijing’s commitment to the ‘partial’ trade deal. Admittedly though, with geopolitical tensions on the rise, investors have taken their eyes off trade news entirely.

In FX, the dollar retreated somewhat as the lack of more escalation in the Middle East took some of the safe-haven shine off the world’s reserve currency. As for today, the greenback will take its cue from the ISM non-manufacturing PMI for December.

Recall that the manufacturing index that was released last week disappointed, signaling that the sector is contracting at a faster pace, and investors will thus be looking for signs of whether that weakness has started to infect the broader economy too. Make no mistake, this is a major risk for the dollar and perhaps for broader risk sentiment as well, as any serious disappointment in the upcoming ISM index could see both recession fears and bets for Fed rate cuts make a strong comeback.

In the euro area, preliminary inflation figures for December are due to be released, though the euro has not reacted to this data set for many months now. Retail sales numbers for November are coming out too.