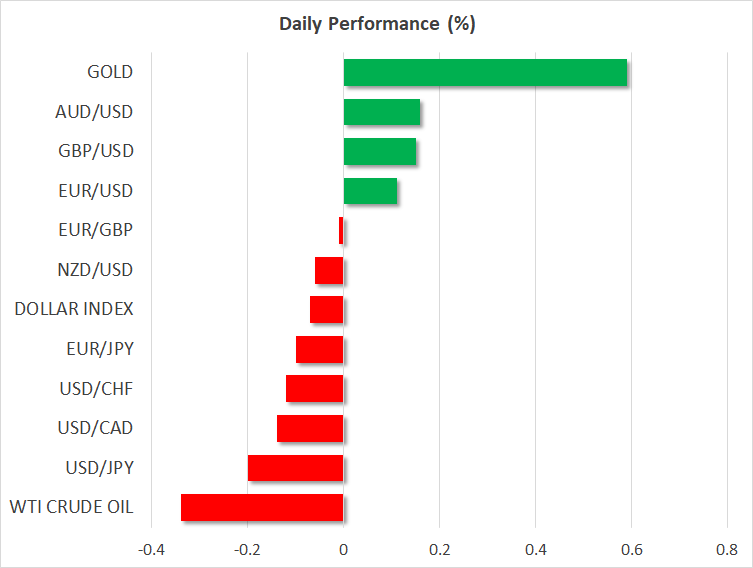 A broad-based decline in the US dollar remains the dominant theme in the holiday-thinned FX market, even in the absence of any noteworthy headlines. The retreat in the greenback is ‘lifting all boats’, with the New Zealand dollar in particular capitalizing the most, continuing its relentless march higher to recover all the losses it posted earlier in the year as trade tensions flared.

Granted, thin liquidity conditions are probably exacerbating most of these moves, and in this sense, it wouldn’t be surprising to see some retracement once the holiday period winds down – with the dollar regaining some poise but the kiwi retreating, for instance.

Gold was another notable mover. The bulls finally pierced above the crucial $1515 per troy ounce area, marking a new high on the daily chart and endorsing the positive picture from a technical perspective.

Fundamentally, the trigger was likely the decline in the dollar, which was also accompanied by a drop in US Treasury yields – both of which are positive for gold prices. Some mild risk aversion may have helped too, alongside investors potentially front-running the seasonal ‘January pattern’ in bullion. Gold has gained in every January since 2014, in what is generally attributed to increased jewelry demand from nations like China ahead of the Lunar New Year celebrations.

US equity investors were, for once, apathetic to some ‘positive’ news on trade yesterday. The S&P 500 (-0.58%) and the Dow Jones (-0.64%) pulled back even despite reports that China’s Vice Premier and chief trade negotiator – Liu He – will visit Washington this weekend to officially sign the phase one trade deal.

The visit hasn’t been confirmed yet but judging by recent comments from both Washington and Beijing, this is merely a formality as the partial deal is already wrapped up. What’s striking is the sell-the-fact reaction in stocks, which suggests that this ‘skinny deal’ is finally fully priced into the markets.

Looking into next year, with the White House having reached a ceasefire with Beijing, it’s not unfathomable that Trump will now turn his sights to Europe. The top US trade official – Robert Lighthizer – recently hinted that the European Union might be his next target, indicating for instance that the large bilateral trade deficit “can’t continue”, which may be a harbinger of things to come.

It does make sense to hit the EU and specifically Germany next, now that Washington has renegotiated all its other major trading relationships, from NAFTA to Japan to China. This is a major downside risk for the already-fragile euro area economy next year and by extension, for the euro itself.

The calendar is light today, featuring only tier-two US data releases. The lion’s share of attention could fall on the Conference Board consumer confidence index for December. Elevated consumer optimism has been one of the key pillars that helped allay worries about a potential recession, so this indicator might become more important in the eyes of investors going forward in the longest US expansion in history.

Beyond that, mind the risk of sharp moves or even ‘flash crashes’ in a thin liquidity environment, as most major financial hubs are closed today and tomorrow.

Have a fantastic New Year and an even better new decade.