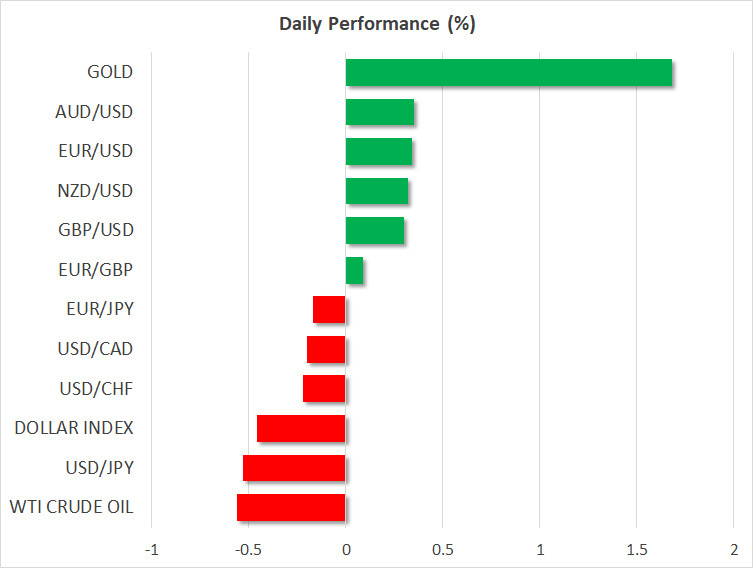 US virus cases could be slowing but dollar still rattled

The US dollar plumbed fresh lows on Monday, slumping to the lowest in nearly two years against a basket of currencies, as investors shunned the world’s number one reserve currency in favour of the traditional safety of gold. Growing uncertainty about the economic outlook of the United States has dented the safe haven allure of the mighty greenback, with even Wall Street treading water lately.

The US recovery appears to be stalling as the disturbing surge in new coronavirus cases since June has forced state authorities to rethink plans to reopen their economies, with many now tightening restrictions rather than relaxing them. However, there are early signs that the latest wave may be peaking as the number of new infections has fallen significantly in the past couple of days.

That may help stocks recoup some losses following the sharp selloff late last week; US equity futures were last trading between 0.3%-0.5% higher. But the setback is already hampering America’s recovery efforts and it’s looking increasingly likely that other economies will outperform the US’s in the second half of this year.

That prospect has propelled the euro to shoot above the $1.17 level for the first time since September 2018 as Europe is finally getting its house in order. European Union leaders have just approved a €750 billion recovery fund that aims to ease the virus burden on the most heavily indebted member states. In addition, despite a worrying flareup in Spain, investors see little sign of Europe experiencing a resurgence on the scale that is currently sweeping the US.

All this is likely to keep the upside pressure on the euro in the coming months as the economic paths of the Eurozone and the US diverge. Other majors are also capitalizing on the dollar’s persistent weakness, with the pound breaking above $1.28 and the Australian dollar climbing back above $0.71.

Apart from the increasing possibility that the growth revival in the US is plateauing, as indicated by the latest weekly jobless claims, the deteriorating relations with China is adding to the uncertainty as it comes just ahead of the November presidential election, meaning Washington’s tone is likely to harden even more when campaigning gets underway.

The heightened tensions have already hammered China’s stock market and although for now it’s making Wall Street only mildly nervous, some traders aren’t taking any chances and ratcheting up their holdings of gold.

The precious metal has been on a relentless drive upwards over the past seven days, hitting an intra-day record of just under $1944/oz today.

But global virus woes and geopolitical risks aren’t the only factors keeping gold in demand. Rock bottom interest rates around the world have been a boon for the non-yielding bullion and the recent slide in US Treasury yields has underscored this trend.

Expectations that the Federal Reserve will pump more stimulus over the next few months, or at the very least, will have to keep its ultra-loose policies in place longer than some other central banks have been weighing on Treasury yields lately, pulling the dollar down as well.

The Fed begins its next scheduled meeting tomorrow and will conclude it on Wednesday. While it’s not very likely that policymakers will announce any major changes to their numerous emergency programmes, they might signal a scaling up of their bond purchases to prop up a slowing economic recovery.

Equally important is whether US lawmakers will be able to agree to a fresh round of fiscal stimulus before the existing support measures expire at the end of the month. The Republicans have only just finalized their proposal for the next virus relief package, but at $1 trillion, it falls far short of the $3 trillion being pushed by the Democrats.

Also in the spotlight this week are the first estimates of second quarter GDP for the US and the Eurozone, while the earnings season will heat up with results from Apple, Facebook, Amazon.com and Alphabet.