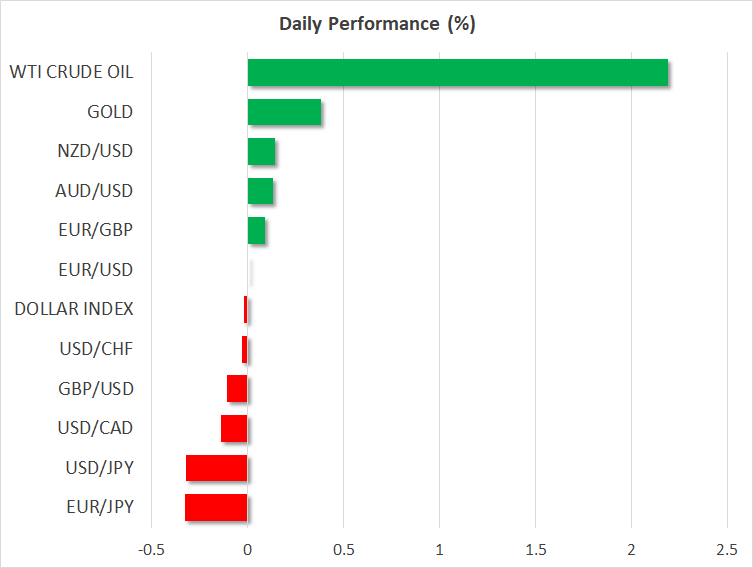 Gold sets sights on $1800/oz as pandemic here to stay

The safe-haven gold was scaling fresh 7½-year highs above $1785/oz on Wednesday even as investors maintained the view that the economic recovery from the pandemic will be a V-shaped one. The precious metal just had its best quarter in four years and is fast approaching the psychological $1800/oz barrier amid ongoing doubts about the prospect of a swift recovery from the Covid-19 crisis.

The daily virus cases continue to rise at an alarming rate in the United States as more and more states tighten social distancing rules. White House health advisor, Dr Anthony Fauci, warned yesterday that the daily cases could soon top 100,000 as it becomes increasingly apparent that most US states lifted lockdown restrictions too early.

The resurgence of the virus is amplifying concerns among policymakers about the long-term damage of the pandemic on the economy. New York Fed President John Williams told a virtual audience yesterday that “a full recovery will likely take years to achieve”.

But virus woes are not the only thing boosting gold. Sino-US relations continue to deteriorate, with China warning of retaliation after the Trump administration began the process of stripping Hong Kong of its special status with the US. As China faces a stand-off with the West over the Hong Kong national security bill, the US is simultaneously stepping up its sanctions on other fronts, placing restrictions on American firms doing business with Chinese tech giants Huawei and ZTE.

The escalating tensions are raising question marks about how long the ‘phase one’ trade deal will stay intact, though markets don’t appear too worried just yet. Global stocks just ended Q2 on a high, with the S&P 500 enjoying its strongest quarter since 1998.

The risk of the US and global recovery being derailed by the surge in virus infections also does not seem to be a major theme yet for equity traders, who remain fixated on the positive economic indicators. US consumer confidence bounced back by more than expected in June, while Asian and European manufacturing PMIs recovered to just below or above the 50 benchmark that separates expansion from contraction.

Next in focus are the ISM manufacturing PMI and the ADP employment report out of the US due later today, ahead of tomorrow’s all-important nonfarm payrolls numbers. The minutes of the Fed’s June FOMC meeting will also be on the radar amid speculation about the likelihood of the central bank introducing yield curve control to its policy framework.

The jobs report, in particular, could be significant in setting the market direction as both stocks and major FX pairs have been consolidating for most of June. It remains to be seen whether this is a case of the risk rally pausing for breath or the new virus reality slowly setting in.

Dollar on the backfoot; ‘so far so V’ for the pound

US stock futures were last trading marginally lower, pointing to some caution, which was also evident in the currency markets, with both the yen and the Swiss franc broadly firmer on Wednesday.

Unusually, the US dollar struggled, coming under pressure versus the yen as well as riskier currencies like the Australian and New Zealand dollars. The greenback’s weakness gave an extra boost to gold’s advances, with a rebound in US Treasury yields making the moves look even more odd.

In a slightly more predictable behaviour, however, the pound jumped higher on Tuesday after the Bank of England’s chief economist, Andy Haldane, maintained his recently adopted hawkish view, saying, “It is early days, but my reading of the evidence is so far, so V”. Sterling held on to its gains today, trading just above the $1.24 level. 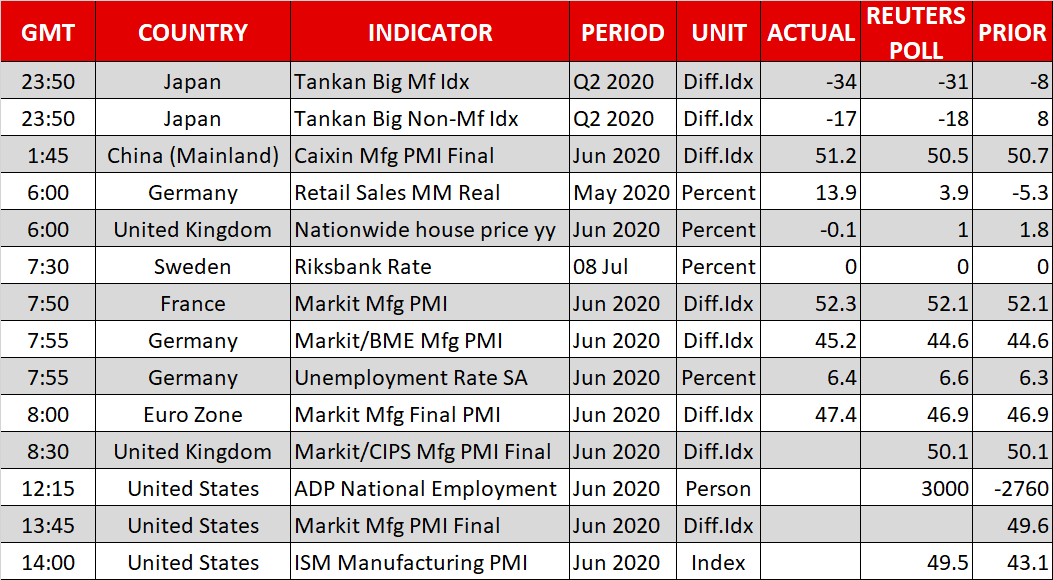