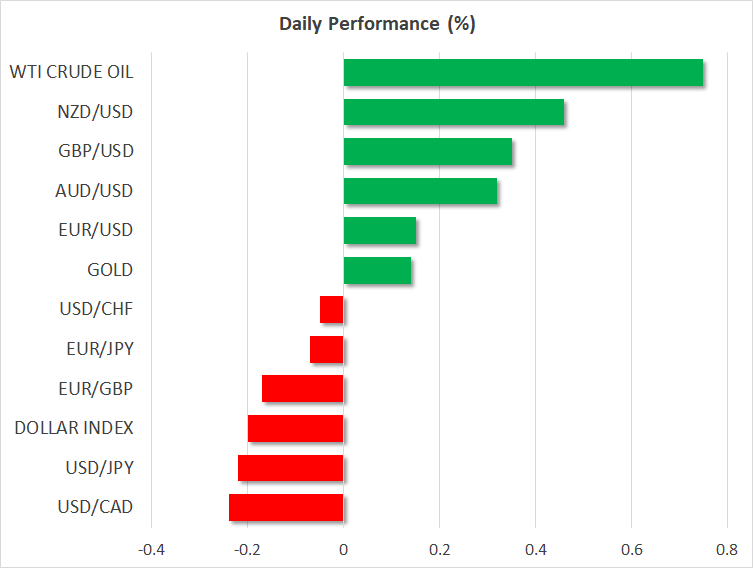 The vaccine euphoria suffered a knockback after stalling retail sales numbers out of the United States yesterday highlighted the short-term challenges policymakers still need to overcome before life can return to normal. Headline retail sales in October grew by the slowest pace since April, while the closely watched control group measure rose by just 0.1% over the month, suggesting that without additional fiscal support, US consumers may further pare back their spending.

Although there have been several signs the US recovery is in danger of floundering, this was the first hard evidence that the combination of waning fiscal stimulus and rising Covid-19 cases is starting to have a real impact on the economy.

Fed Chair Jerome Powell repeated his calls for more fiscal stimulus from Congress in remarks yesterday. But with the Republican-controlled Senate unlikely to approve a package greater than $500 billion, it looks like it will be up to the Fed to provide another lifeline to the economy until mass vaccination programmes are rolled out.

Expectations that the Fed will increase monetary stimulus in December have been steadily rising in recent days, dragging Treasury yields sharply down. Policymakers have been playing down the immediate benefits of a vaccine and Powell was quick to stress this, saying “The next few months may be very challenging”.

The deteriorating short-term outlook pulled Wall Street into the red on Tuesday, though US stock futures were mostly flat today. The sell-off also appears to have eased in Asia and Europe where the main indices have been mixed today.

Whilst the vaccine story is no longer driving the rally, it’s nevertheless able to put a floor under equities as investors can now see a bright light at the end of the tunnel. Even the worrying virus headlines are not enough to spark a major stock market correction as traders can count on the likes of the Fed and the ECB to pump more stimulus in the meantime.

As Europe and America battle their second and third waves, respectively, other regions are also reporting flare-ups. In Australia, the state of South Australia has just been placed under a six-day lockdown, while in Japan, a record number of cases has been recorded in Tokyo overnight.

But judging from the reaction in bond markets, it’s the US economic outlook that investors are repricing the most, as not only had they not expected the virus numbers to get so bad again, but many had also bet on Congress to have passed a new virus relief package by now.

The yield on 10-year Treasury notes slumped to a more than one-week low today, weighing heavily on the US dollar. German and Japanese yields were down too, but by a somewhat lesser extent, allowing the euro and yen to hold their own against the greenback.

The US currency is down across the board, slipping below the 104 level versus the yen.

The commodity-linked Australian, Canadian and New Zealand dollars were back up, reversing yesterday’s declines, with the kiwi soaring to a 20-month high as investors scale back expectations of negative interest rates in New Zealand following the RBNZ’s recent hawkish shift.

The pound was another currency extending its gains as it approaches the $1.33 level. Hopes are high that Britain and the EU are on the verge of clinching a post-Brexit trade deal. Although negotiators are unlikely to strike an agreement by tomorrow’s EU summit, there is a growing indication that a “landing zone” may be agreed upon early next week amid signs both sides have compromised on the thorny issue of fisheries. 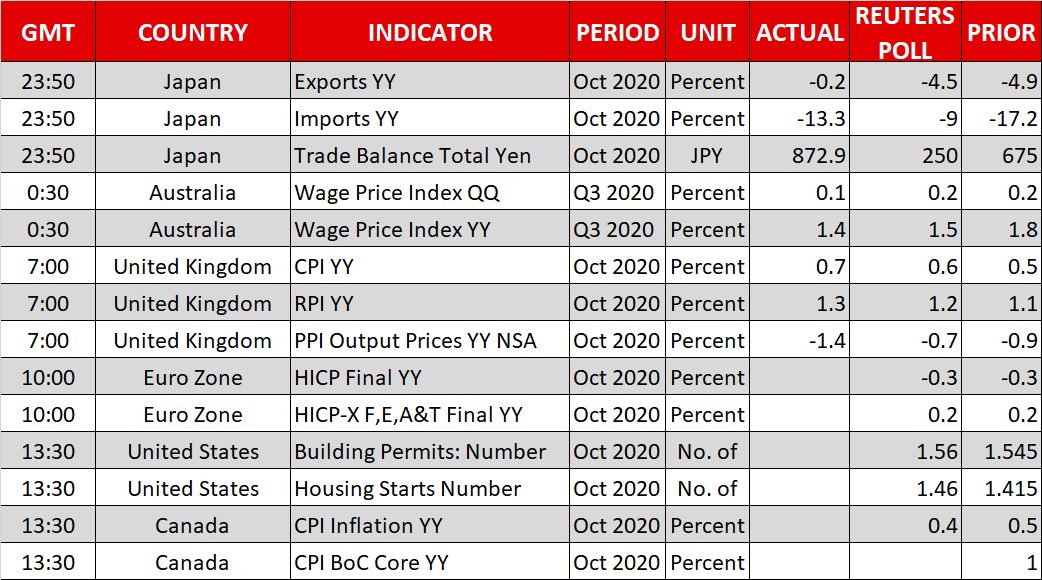