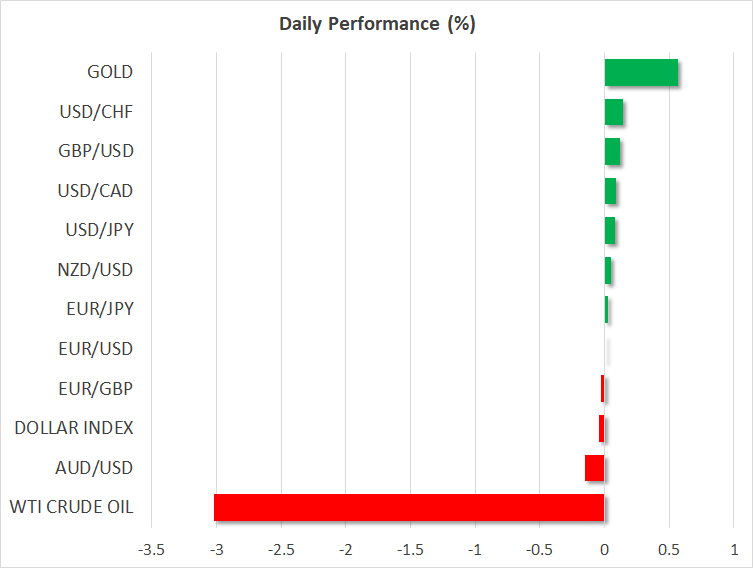 US and China heading for another clash

Hong Kong looks set to lose the special status it enjoys with the United States on a range of areas, including trade, after US Secretary of State Mike Pompeo said the Trump administration no longer considers it to be autonomous from China. Pompeo told US lawmakers on Wednesday that Hong Kong “does not continue to warrant treatment under United States laws” in the same manner as it did before, setting the stage for punitive sanctions.

At the same time, the US House of Representatives approved the Senate bill calling for sanctions on Chinese individuals in response to human rights abuses on ethnic minorities in China. Yet, Washington’s growing list of grievances with China does not seem to be worrying anyone in Beijing as China’s parliament on Thursday approved the national security bill for Hong Kong that has provoked international criticism.

However, the strained relations are certainly causing anxiety among local traders as the Chinese yuan slid to 9-month lows versus the US dollar yesterday as the risk of a re-escalation in trade frictions between the two countries is growing by the day.

But remarkably, the only other loser during this period of renewed tensions has been the Hong Kong stock market. The Hang Seng index has been underperforming the global market ever since China first proposed its controversial security law. But even the sell-off in Hong Kong has not been too dramatic given the current economic backdrop and shares today pulled back from an earlier steep drop as the mood in other markets remained calm.

Once again, the peace of mind that governments and central banks stand ready to step in and save the day is keeping investors in risk-on mode even as the threats from a slow virus recovery and the trade war being reignited loom large.

The S&P 500 closed above the 3,000 level on Wednesday for the first time since March 5 and e-mini futures point to further gains for today, though the Nasdaq’s rally appears to be losing some steam.

Mega stimulus packages announced in recent days in Japan and the European Union have turbocharged equities in Tokyo and Europe. The Nikkei soared by another 2.3% today, while the DAX in Frankfurt was last up 1%.

In FX markets, however, the euro appeared to have run out of breath after a two-day rally. The single currency slipped back below the $1.10 level after hitting a near 2-month peak yesterday. The European Commission has unveiled a €750 billion virus relief package to help crippled Eurozone economies recover from the pandemic.

However, with €500 billion of the total sum to be used as grants rather than loans, as pushed for by France and Germany, it is unclear whether the ‘Frugal Four’, consisting of Austria, Denmark, the Netherlands and Sweden, will accept such a generous package given their opposition to poorer states being subsidized by the rich. Still, the ambitious recovery plan is more likely than not to get the go ahead and a bigger issue that could hold back the euro is the timeline that the whole process takes.

In other currencies, the US dollar moved off yesterday’s lows as it gained some ground versus the yen and the euro. But the pound was steadier after coming under pressure on Wednesday from Brexit fears, as UK-EU negotiations remain deadlocked over key issues with just one month to go before Prime Minister Johnson has to decide whether to extend the transition period beyond the end of 2020.