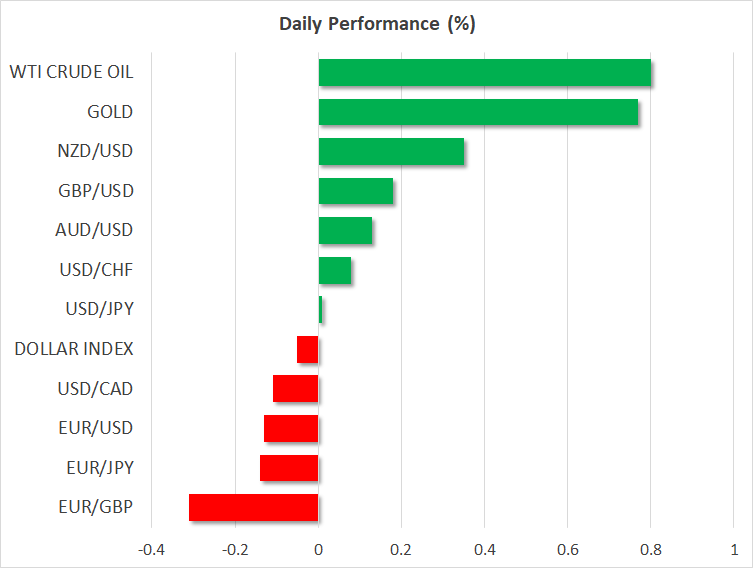 Tehran didn’t take long to retaliate against the US assassination of its most powerful general, as overnight Iran attacked with ballistic missiles two military bases in Iraq that are hosting American troops. Luckily, or perhaps intentionally, there have been no reports of casualties so far, and the size of the material damage is being assessed.

But investors fade the risk-off move, betting on de-escalation

Yet, these moves retraced in the following hours. Futures are now pointing to a positive open on Wall Street, while the yen has surrendered all its intraday gains to trade practically flat against its major peers. Oil and gold are still in the green, though both have given up the vast majority of the gains accrued after the missile salvo.

Much of this market serenity is owed to both sides signaling they don’t want to escalate matters any further. Iran’s foreign minister tweeted out that his nation took defensive steps and that “we do not seek escalation or war”. A few minutes later, President Trump echoed a similar message, saying that “all is well” and that he will make a statement later – with the tone of his tweet being rather upbeat, certainly not indicative of someone about to aggressively ‘counterpunch’.

Overall, investors seem to have sided with the view that while this is clearly a worrisome situation, it doesn’t end with an actual war. The concern was that Iran would strike back against US personnel, leaving Trump no choice but to hit back again, generating a vicious tit-for-tat cycle of retaliation. With no US casualties to speak of though, and with Tehran having replied in a strong enough fashion to save face domestically, the risk of the situation escalating out of control appears fairly low.

In a weird way, this was as good an outcome as markets could have hoped for – just material damages. Now we wait for Trump’s response. Remember, material destruction doesn’t seem to concern him that much, judging for example by the muted US response to Iran shooting down a US drone last year.

The world’s reserve currency recovered ground yesterday and is also outperforming early on Wednesday, drawing strength from the ISM non-manufacturing PMI for December. The index rose by more than expected, putting to bed concerns about the health of the US economy.

As for today, the greenback will take its cue from the ADP employment report, which will serve as a prelude to Friday’s non-farm payrolls report.

Elsewhere, the aussie was by far the biggest loser in the G10 FX sphere yesterday. Without any major news out of Australia, the tumble seems owed to worries about the recent wildfires impacting the real economy, which in turn fueled bets for an RBA rate cut in February.

In the UK, PM Boris Johnson will meet the new European Commission President – Ursula von der Leyen – for the first time and traders will be on the lookout for any Brexit remarks.