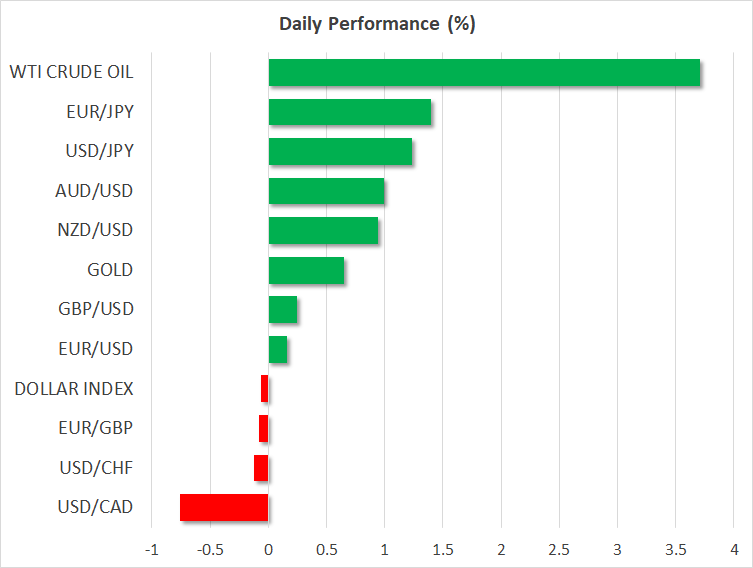 Global markets are living a nightmare. The fear that enveloped stocks evolved into full-blown panic on Thursday, with the Dow Jones falling by a staggering 10% as investors continued to liquidate everything, frightened or unable to absorb any more losses. With the whole investing world being leveraged long before this thunderstorm, it seems we have now entered a vicious loop where selling begets more selling, as margin calls are forcing many players to liquidate positions.

Things were even worse outside the US. Most European equity indices collapsed ~11%, while the Italian market fell by a mind-boggling ~17% amid mounting concerns about an imminent recession with the entire country going into lockdown for who knows how long.

What’s striking – and extremely worrisome – is that the Fed couldn’t calm markets and halt the fire sale in stocks even by throwing the kitchen sink at the problem. The world’s most important central bank said it could inject an unbelievable 5 trillion dollars of liquidity into the market this month if needed to ensure the Treasury market continues to function smoothly. The Fed will also expand its asset purchases to include US bonds again, which means that Quantitative Easing (QE) is back.

In normal times, such an announcement would probably ignite a massive stock rally and spell some pain for the dollar. Yet, this period is anything but normal. Although the greenback did retreat somewhat in the aftermath, it still outperformed all other major currencies, while stocks – despite rebounding a little on the news – fell back to post even greater losses.

In other words, the Fed brought out its bazooka, but that did almost nothing to soothe panicky investors. That’s an ominous sign, and in isolation, it reaffirms that markets see monetary easing as the wrong antidote for this shock. The correct cure may be targeted and proactive fiscal policy, like paid sick leave for all those who are required to self-quarantine alongside measures to help smaller businesses survive, and the agony may not stop until markets get that.

The return of King Dollar

In the FX spectrum, the dollar got the wind back in its sails. The greenback massively outperformed the competition – even the defensive Japanese yen – as the carnage in global markets recharged safe-haven demand for the world’s reserve currency. A weaker euro in the aftermath of the ECB meeting certainly helped (see below).

Overall, the dollar seems to have undergone a paradigm shift lately, going from behaving like a ‘risk on’ currency to becoming a safe haven again that can outperform even on a day when the Fed resurrects its QE program.

From this angle, it’s hard to be negative on the currency. If the combination of carry trades being unwound, investors pricing in Fed rate cuts to 0%, and the reintroduction of QE wasn’t enough to keep the dollar down, it’s difficult to see what will.

The European Central Bank (ECB) didn’t cut rates yesterday, and instead introduced a series of ‘targeted’ measures to counter the virus shock, including new ultra-cheap loans to banks and an expansion of its QE programme. Markets were fully pricing in a rate cut ahead of the meeting, so the absence of that saw the euro pop higher on the decision.

However, the single currency quickly surrendered its gains to trade much lower after President Lagarde suggested that her ECB won’t be as attentive to market stress as her predecessor’s was. She said she doesn’t want to be ‘whatever it takes, number two’, referring to an epic comment by then-president Draghi during the Eurozone debt crisis that the ECB will ‘do whatever it takes’ to preserve the euro.

That wasn’t what the market wanted to hear, and the response was vicious, with both the euro and European shares selling off in the aftermath.