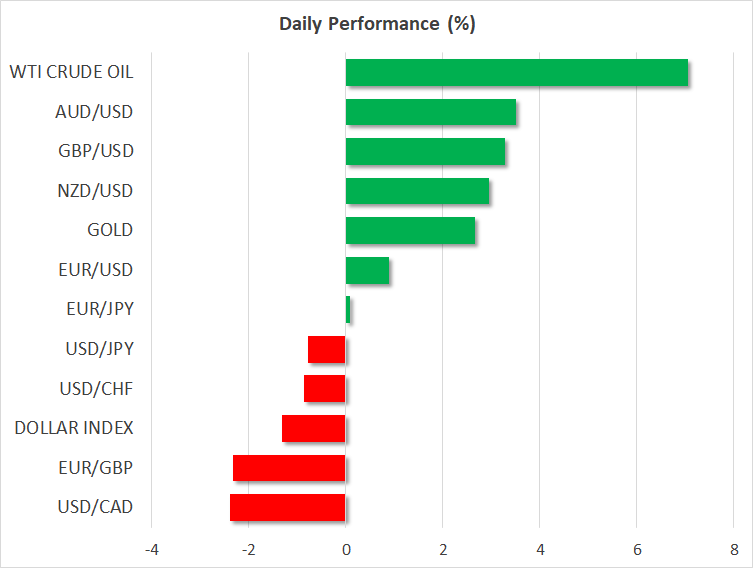 Stocks stage a comeback; will it last?

Global stocks enjoyed a much-needed reprieve from the fierce selling pressure of the past two weeks on Friday as the flurry of central bank and government interventions finally appeared to have some effect in relieving investor anxiety.

All three major indices on Wall Street closed higher on Thursday, with the Nasdaq Composite (2.3%) being the main winner. The tech-heavy index has not fallen by as much as the Dow Jones during the latest sell-off, suggesting investors think technology companies are more immune to the virus crisis than more traditional companies.

Sentiment started to turn around yesterday as more central banks announced emergency policy measures to help their economies cope under the strain of national lockdowns and business paralysis. It comes as the death toll from the coronavirus continues to rise at a worrying level, especially in Italy, which has now overtaken China as the epicentre of the outbreak.

In Asia, South Korea’s KOSPI 200 index surged by more than 7%, aided by news that the Federal Reserve is extending its currency swap program with nine other central banks, including the Bank of Korea, further easing the dollar liquidity squeeze in the markets.

Europe was also in buoyant mood, with the London FTSE 100 index rising by 4% at the open and the German DAX by 5.5%.

However, with the virus outbreak yet to have reached a peak in Europe and the United States, the flow of negative headlines is far from over and it’s doubtful there won’t be more panic to come.

Dollar in sharp retreat; yen also slips but gold up

For now, though, the latest wave of central bank action seems to have been successful in bringing some order to the markets and although panicky investors will probably continue to feel the urge to sell everything but the kitchen sink, the frenzy for liquidity has likely paused and this is dragging the US dollar lower.

The greenback slid against all of its major peers on Friday, with its index pulling back from a 3-year peak touched earlier today. Against the yen, the dollar fell 0.7% to 109.90 even as the Japanese safe haven also gave ground on the back of the improving risk appetite.

Unusually, gold rallied despite the calmer market tone, as the precious metal was not excluded from investors’ sell list during the rush for cash and was last up 2.7% at $1,509 an ounce.

The British pound managed to halt its dramatic slide, jumping back above the $1.17 level after earlier carving a fresh 35-year low of $1.1404. While the weaker dollar is the main reason for the pound’s recovery, a fresh dose of stimulus by the Bank of England has further resuscitated the battered currency.

The BoE yesterday slashed interest rates to a new all-time low of 0.10% – the second emergency cut in a week – and relaunched its quantitative easing program. Additionally, the UK government is expected to announce today support for companies to pay workers’ wages to ease the burden during the crisis.

Meanwhile, in the US, there is progress on the $1 trillion economic stimulus after Senate Republicans formally unveiled the package, which means negotiations can begin with the Democrats for a bipartisan deal. China also pledged more fiscal stimulus, adding to the chorus of government responses to the virus fallout.

In Australia, the RBA’s foray into quantitative easing put a lid on Australian government bond yields. But the Australian dollar still managed to bounce higher by 3% to cross back above the $0.59 level.

The Canadian dollar also made up for lost ground, with dollar/loonie skidding from a 4-year top of 1.4667 to around 1.42, as oil prices attempt to rebound from this week’s 18-year lows.