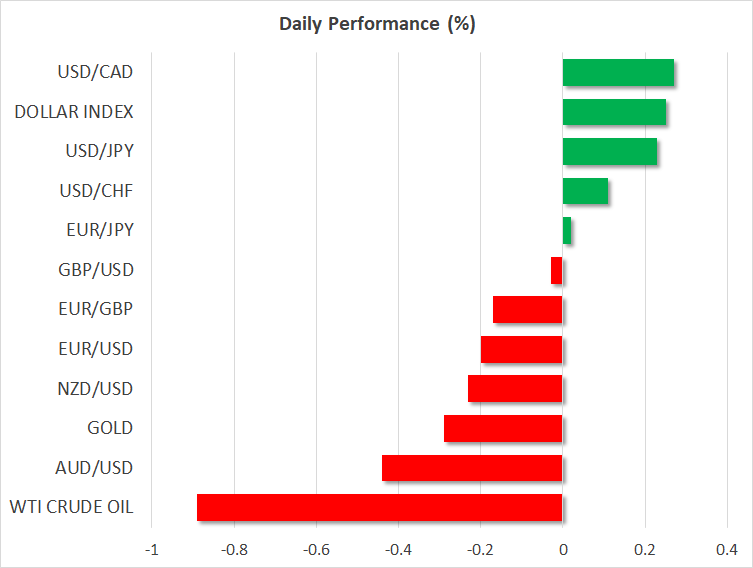 Global markets staged a powerful rally to kick off the new week. Stock indices in most regions closed with solid gains while the defensive US dollar edged lower, with no real catalyst other than a furious buying spree in Chinese stocks after state-backed media relentlessly encouraged investors to join the new ‘bull market’.

Speaking of China, could this stock cheerleading from local authorities be connected to what’s happening in Hong Kong? With the new US sanctions set to choke off a giant source of USD liquidity flowing to China, Beijing may be trying out new tactics to halt capital outflows or encourage inflows from abroad, to keep its import-oriented sectors awash with dollars and running smoothly.

In any case, this exuberance seems to have evaporated on Tuesday, with stock markets turning lower and the dollar recovering, as the focus has turned back to the worsening virus picture. Infections are surging in India, nations like Israel are experiencing a second wave, and while the case count in America eased a little yesterday, that may be owed to the ‘weekend spell’ of under-reporting rather than an actual slowdown in the trend.

Spearheading the worrisome virus news globally, Australia’s second most populous city – Melbourne – just announced a new full-fledged lockdown for six weeks to bring the recent outbreak back under control. The news sent the aussie tumbling, exacerbating the currency’s earlier troubles after the RBA struck a rather cautious tone at its meeting.

This may be the biggest factor weighing on risk assets today in general, serving as a stark reminder that even if a country contains the pandemic successfully, future outbreaks still cannot be ruled out.

All told, an ocean of liquidity and stimulus has so far been enough for investors to turn a blind eye to the many risks unfolding around them, but so much of the economic recovery seems discounted now, that any future gains may be increasingly difficult to come by.

Indeed, the risk/reward picture for riskier assets like stocks and commodity currencies seems quite unattractive from here. US economic data for July might be ugly due to the reclosures, there’s considerable uncertainty around how much more stimulus Congress will authorize, and there’s a fast-approaching earnings season that investors are going into ‘blind’, without much guidance by firms.

On top of everything, the US economic surprise index is currently at all-time highs, which implies either that investors’ expectations will gradually be calibrated higher and make it more difficult for data to beat forecasts, or that the data might disappoint elevated expectations. In other words, improving data might not have the same ‘bang’ to them anymore, or fall short of rosy expectations altogether. Longer term, there’s also a highly uncertain US election season.

To be clear, all this doesn’t mean that markets can’t still move higher from here – rather, that the potential reward relative to potential risk seem asymmetric and tilted to the downside.