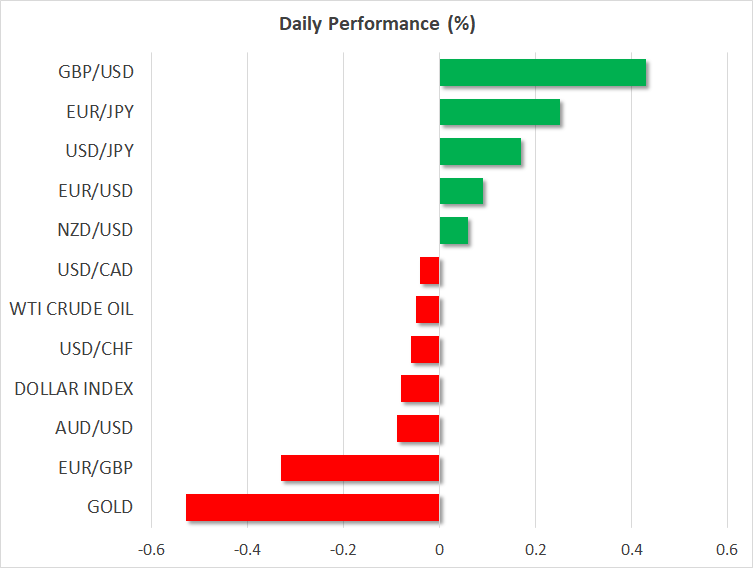 US stocks to open at yet another record high; yen retreats

Risk appetite remained firm at the end of last week, with all three of the major US stock indices closing at new records, after a high-ranking White House official played up the prospect of a breakthrough in the trade talks. His cheerful remarks stood in contrast with some recent reports that suggested the negotiations had stalled, and rekindled hopes that a ‘phase one’ deal will be reached soon.

The yen and the Swiss franc retreated alongside gold, as investors rotated away from defensive assets – though the scale of these moves was fairly modest. The optimism seems to have carried over into this week, with trading early on Monday characterized by the same ‘risk-on’ moves, even without any noteworthy news over the weekend. Futures point to another record-high open on Wall Street, as the S&P 500 is expected to open ~0.3% higher.

So, what now? With the economic calendar being empty to kick off the week, any trade updates will dictate the mood in markets. While the atmosphere is currently sanguine, remember that the two superpowers still can’t agree on a timeline for rolling back the existing tariffs, and Beijing has been adamant that merely cancelling future tariffs isn’t good enough. The size of agricultural purchases is another sticking point.

The bottom line is that a lot of good news has been priced in already, but it’s still questionable whether an agreement will ultimately come. Hence, the potential downside in markets in case incoming headlines sour again may be quite severe – whereas any further upside from here if a deal is indeed sealed may be relatively modest.

The British currency got a boost from politics on Friday and continues to climb today, after the Brexit Party (BP) announced it won’t contest an additional 43 seats at the upcoming election, which the Tories came close to winning back in 2017. Since the BP and the Conservatives appeal to a similar voting base, this stand-down theoretically boosts the chances of the Tories sweeping some seats from the opposition, and consequently of gaining a clear majority in Parliament.

Going forward, incoming opinion polls could become an even greater driving force for the pound, as polls conducted closer to Election Day may carry more legitimacy in the eyes of investors.

A single look at recent polls suggests that the wind is clearly blowing in favor of the two big parties, with both the Tories and Labour climbing in tandem, to the detriment of the Liberal Democrats and Brexit Party. That’s a pound-friendly trend to the extent that it diminishes the odds of a hung parliament, and if the same pattern persists over the coming weeks, the currency could extend its latest gains.

The greenback was also among the losers on Friday, after a mixed bag of retail sales data brought into question the strength of the US consumer. That said, markets are still assigning only a one-in-three chance for another Fed rate cut by March, so this wasn’t a game-changer either.

Overall, the outlook for the dollar still seems favorable. The US economy is in much better health than the European or Japanese ones, and US interest rates are likely to stay much higher, suggesting that capital flows from the rest of the world may continue to find their way into America.