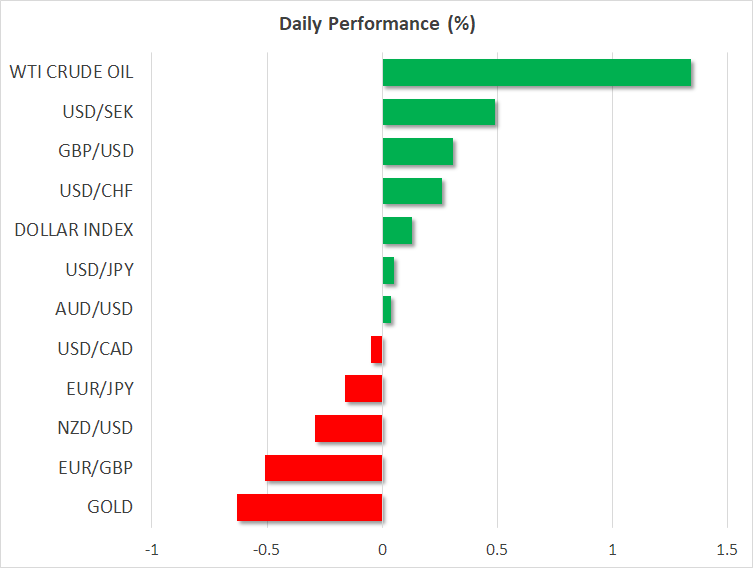 Stocks in Asia were mostly positive on Friday and European and US equity futures were also pointing to a firmer start following yesterday’s rebound in risk appetite. Sentiment was boosted from a surprise jump in US retail sales, allaying fears of an imminent recession in the world’s largest economy, while upbeat remarks by President Trump on US-China trade talks further lifted some of the gloom from the markets.

Retail sales in the US unexpectedly rose by a stronger-than-expected 1.0% month-on-month in July, suggesting American consumers remain confident. Investors were also encouraged from signs of progress in the troubled Sino-US trade negotiations after Trump said, “we’re having very productive talks”.

Stocks on Wall Street reversed earlier losses to end the day higher, with the S&P 500 closing up by 0.25%. But traders in Asia were more cautious with Japan’s Nikkei 225 struggling to hold onto gains and Chinese shares also giving up some of their earlier advances despite reports that China’s state planner is preparing measures to raise disposable income in the country to boost consumption.

The response in bond markets was more muted, however, as yields globally continued to flash warning signs. The yield on 30-year Treasury notes hit a record low of 1.9160% yesterday, dropping below 2% for the first time ever. But to the relief of policymakers, the spread between 10- and 2-year yields turned positive again after briefly inverting earlier this week.

St. Louis Fed President, James Bullard, said on Thursday “Any inversion that is going to send a bearish signal for the U.S. economy would have to be sustained over a period of time,” suggesting that while the Fed isn’t predicting a recession just yet it is watching the yield curve very carefully. The Federal Reserve will be in focus next week as officials head to Jackson Hole, Wyoming for the annual economic symposium and Chairman Powell is likely to provide fresh policy direction in his speech.

For now, though, the US dollar appears to be enjoying a mini rebound, mainly on the back of a weaker yen and euro. The dollar index is headed for weekly gains of 0.8% as investors unwind some of their recent aggressive buying of the safe-haven yen and the euro comes under renewed pressure on expectations of ECB policy easing in September.

The yield on 10-year German bunds touched a new all-time low of -0.714% earlier today as markets upped their expectations of a big stimulus announcement by the European Central Bank in September after Governing Council member Olli Rehn yesterday hinted at a substantial package. This dragged the euro to a two-week low of $1.1083 even as other majors such as the aussie were being supported by the improved risk-on tone.

The pound was riding high versus the dollar on Friday, breaking above the $1.21 level, on news that Labour leader Jeremy Corbyn is trying to win the backing of other opposition parties, including rebel Conservative MPs, to lead a “time-limited” government in the run-up to the October 31 Brexit deadline. If Corbyn’s plan gains enough support, it would involve calling a vote of no confidence against Prime Minister Boris Johnson’s administration as soon as Parliament returns from recess in early September, forming a temporary government and postponing Brexit before the deadline.

However, it was unclear how many Tory Remainers would back Corbyn and there was also lack of enthusiasm for a Labour-led government by the Liberal Democrats whose votes would be crucial in such a plan. This kept the pound’s gains limited even with the support of a broadly solid set of UK indicators this week.