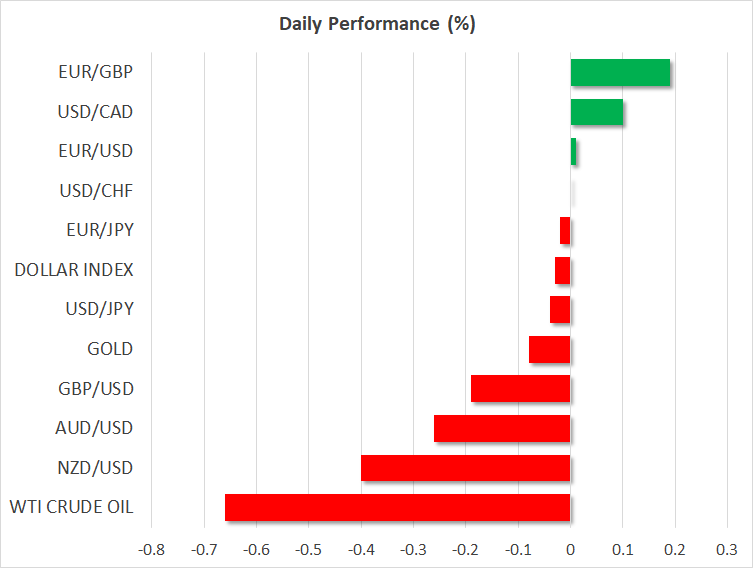 Major pairs were trading within their recent ranges on Thursday as markets were offered a rare respite from Brexit and trade war headlines. The pound was marginally lower at $1.2895 as traders awaited the European Union’s decision on whether to grant the United Kingdom an extension to the Brexit deadline, which is expected to be made by the end of this week.

Although it’s almost certain that the EU will decide in favour of another delay, it’s unclear what the length of the extension will be. If the EU approves a three-month delay as requested by the British Parliament, Boris Johnson is likely to call a general election. However, opposition parties could again block the prime minister’s request, forcing Johnson to resume the reading of the Brexit deal legislation, which would lay it open to alterations by MPs.

The US dollar was also steady on Thursday, trading virtually unchanged versus the yen at 108.72. Signs of progress between US and Chinese negotiators in their trade talks had lifted risk appetite since a ‘phase 1’ deal was announced two weeks ago, boosting China-exposed currencies such as the Australian and New Zealand dollars. However, both the aussie and kiwi were trading lower on Thursday amid some caution ahead of a scheduled speech by the US Vice President Mike Pence on China later today.

Pence is due to deliver an address that is expected to focus on US-China relations at 1500 GMT. A similar speech last year was blamed by many for causing the late 2018 slump in equities globally after his remarks suggested the US’s grievances with China went beyond trade. Another China-critical speech this year could spark fresh turmoil in financial markets and cast doubt on the Trump administration’s commitment to resolving the long-running trade dispute.

For now, though, stocks are taking their cues from the US earnings season, which got into full swing this week. Traders shrugged off disappointing earnings from Caterpillar and Boeing as many had been expecting even worse results, while strong beats from Microsoft and an improving revenue outlook for Apple helped drive Wall Street higher.

The S&P 500 closed up 0.29% on Wednesday, boosting Asian and European indices today, though e-mini futures were pointing to a flat open. Today’s earnings highlights will come from Amazon.com, Twitter Inc and Intel Corp.

The European Central Bank’s policy meeting will be the main event today, with the announcement due at 1145 GMT, to be followed by Mario Draghi’s press conference at 1230 GMT. Today’s meeting will be the last one to be presided by Draghi and so he is unlikely to comment on future policy. However, his successor, Christine Lagarde, will be joining at a critical time for the ECB amid splits within the Governing Council and a sluggish Eurozone economy.

Flash PMI readings for October released this morning showed the region’s economic troubles were far from over as they disappointed once again. The key composite PMI by IHS Markit rose slightly in October but by less than expected, suggesting the Eurozone may require still more stimulus.

The euro was unmoved, however, trading flat at $1.1131 as investors doubted whether policymakers would be able to agree on further easing in the future.

PMI numbers are also due out of the United States later today, along with durable goods orders for September. 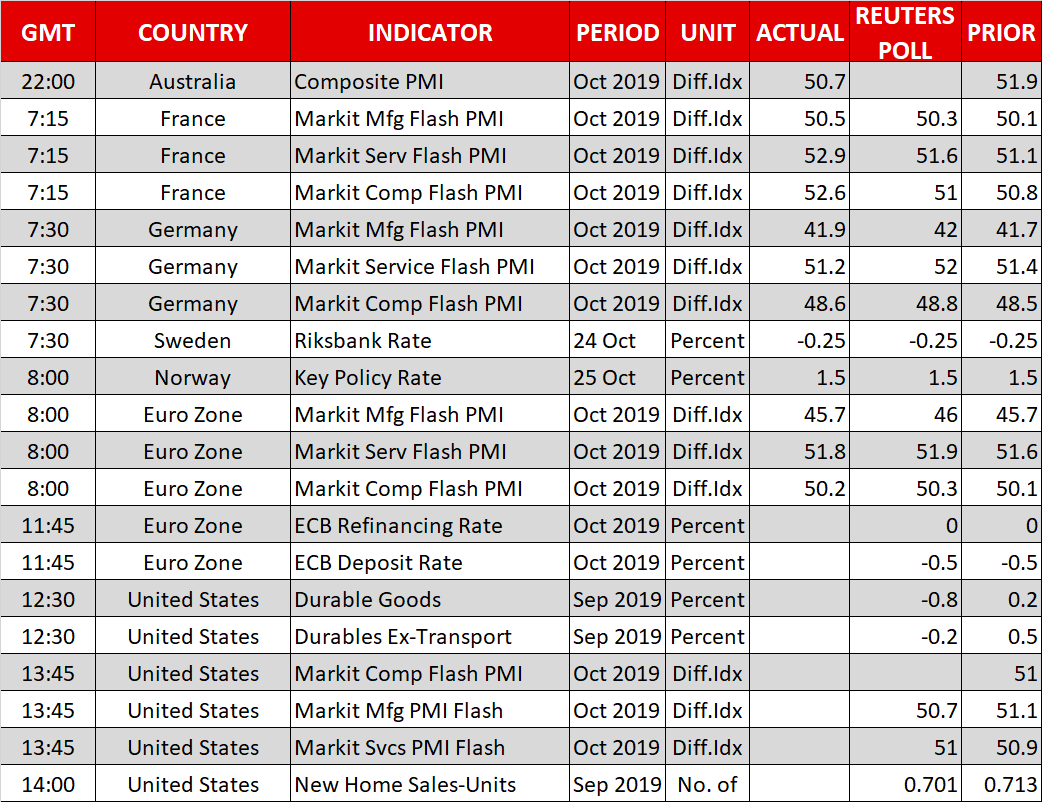