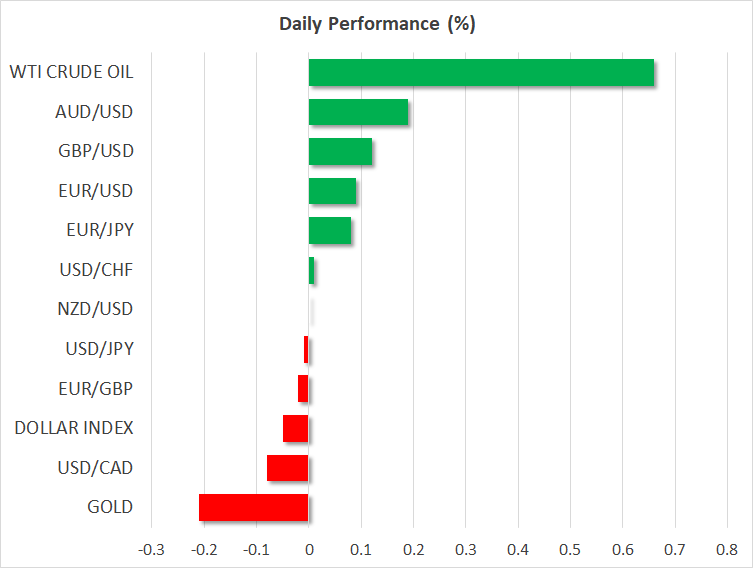 US and China reportedly agree to roll back some tariffs

Trading got off to a volatile start on Thursday as negative headlines late on Wednesday quickly turned positive. Doubts emerged about the likelihood of the US and China being able to sign an interim trade deal soon after Reuters reported that the meeting between President Trump and President Xi might be delayed to December.

News of a possible delay raised concerns that the Trump administration was resisting giving the green light to removing some of the existing tariffs imposed on Chinese imports – something which Chinese negotiators have been pushing hard for. The report led to a quick souring of the market mood, weighing on stocks in the US overnight and in Asia in early trading, while pulling the safe-haven yen higher.

However, the risk aversion abruptly faded after Bloomberg today reported that the US and China have agreed to scale back some of the tit-for-tat tariffs they’ve imposed on each other’s goods. Negotiators from both sides have decided to “remove the additional tariffs in phases as progress is made on the agreement”, according to a Chinese government spokesman.

The US has yet to comment on these reports but if confirmed, it could set the stage for the ‘phase one’ deal to be signed in early December, possibly at the NATO summit in London, as well as lay the ground for the talks to move on to ‘phase two’.

It’s been a manic session for the yen as the world’s favourite safe haven dramatically reversed its advances over the past 24 hours against its major peers following the developments in the Sino-US trade talks. The yen had firmed to 108.64 per dollar but plunged to around the 109 mark as risk appetite bounced back on the news that the US and China have agreed to roll back their tariffs in phases.

Gold also fell back, easing to around $1485/ounce, having climbed to $1494/ounce yesterday.

However, despite the improved risk-on mood, the US dollar was lacking direction and was flat against a basket of currencies. Traders will be hoping to get their cues from Fed speakers which are on the roster today and tomorrow.

In contrast, both the euro and the Australian dollar seemed to get a lift from the strong prospects of a partial US-China trade deal. The euro edged up to $1.1080, while the aussie was up 0.25% at $0.6900. The $0.69 area has been a difficult barrier to break and the RBA’s Monetary Policy Statement due tomorrow could put a cap on the aussie’s gains if the central bank sharply downgrades its economic forecasts.

European equities were also buoyed from the trade optimism, with the Euro Stoxx 50 index reaching its highest in two years today.

The Bank of England will announce its policy decision at 12:00 GMT, which will be followed by a press conference by Governor Mark Carney at 12:30 GMT. The Bank is expected to keep interest rates unchanged but may sound a more dovish tone given the ongoing Brexit drama and the slowdown in global growth.

But although a possible dovish shift is an immediate risk for the pound, investors are more concerned about the outcome of the UK general election on December 12. Both the Conservative and Labour parties have had a bumpy start to their election campaigns and the snap vote is looking to be the most unpredictable in decades.

The uncertainty is likely to keep the pound stuck in a sideways range of $1.28-$1.30 until some of the cloud has lifted.