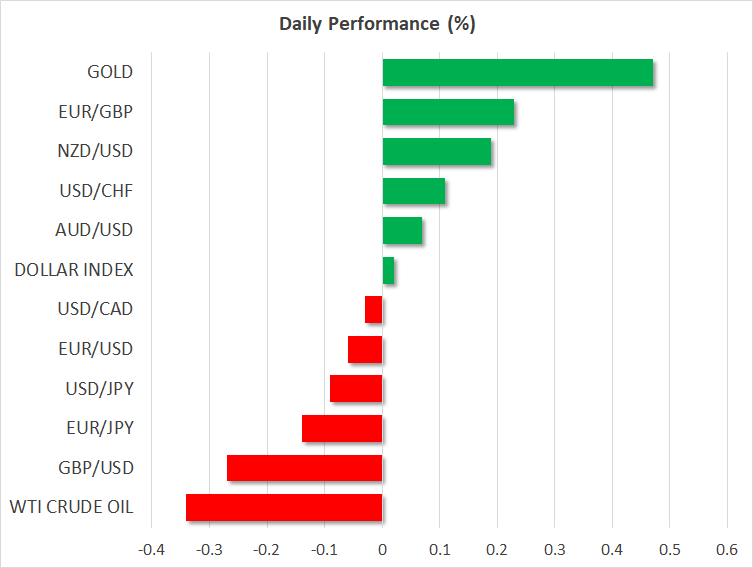 Markets were overcome by trade news fatigue on Friday as days of conflicting messages on the state of the US-China talks left most investors none the wiser about whether a partial trade deal was still possible.

The dollar index, which measures the greenback against a basket of six of its rivals, is on track to end the week marginally lower. The yen is also on course to finish the week virtually flat, having been unable to break out of its tight ranges despite a few jitters during the week about the prospect of a US-China trade deal.

Investor fears on rumours that the White House is not happy about rolling back existing tariffs on Chinese imports and that a deal could be delayed until 2020 have been calmed by reassuring words out of China. A Chinese Commerce Ministry spokesman told reporters yesterday that the rumours “are not reliable” and that the two sides are working to resolve their differences. President Xi also waded into the discussion, reiterating that China wants to “work for a ‘phase one’ agreement on the basis of mutual respect and equality”.

There was further optimism that an agreement may yet be concluded by December 15 when the next wave of US tariffs will hit China after the Wall Street Journal reported that China’s top negotiator has invited his US counterparts to Beijing for face-to-face talks.

As most major pairs struggle for direction, the Canadian dollar got a shot in the arm on Thursday after Bank of Canada Governor Stephen Poloz played down the chances of a rate cut. Speaking in Toronto, Poloz struck a more neutral tone than at the last policy meeting, saying “we think we got monetary conditions about right given the situation”.

The loonie jumped from around 1.3320 to 1.3265 to the US dollar after his comments, with investors sharply paring back their expectations of a rate cut over the next few months.

Although Poloz’s comments don’t imply a rate cut has been taken off the table, the BoC may feel less of a need to act while the Federal Reserve is also on pause. For now, though, traders will have to take their cues from the latest retail sales numbers out of Canada due later today.

Euro see-saws on flash PMIs; UK PMIs up next

The euro spiked higher on better-than-expected flash manufacturing PMIs out of France and Germany this morning but fell back on disappointing services PMIs for the Eurozone. The manufacturing PMIs for France and Germany both beat expectations in November, suggesting that the downturn in the sector may finally be coming to an end. However, the services PMIs for the euro area fell short of expectations, indicating there’s still plenty of weakness in the bloc and that the road to recovery will likely be a long one.

The single currency briefly touched $1.1085 after the data before dipping to around $1.1050. There was little reaction to ECB President Christine Lagarde’s first key policy speech where she maintained much of the language of her predecessor, pledging to support the economy with monetary policy while calling for fiscal help from national governments.

Flash PMIs will follow out of the United Kingdom shortly – the first for the country. But with the election campaign heating up, traders are more focused on the polls as the opposition Labour party have been making some inroads lately, in a possible reminder of the 2017 election when Labour quickly wiped out the Conservatives’ lead in a matter of weeks.

The pound was steady however, as it continued to hover around the $1.29 level. 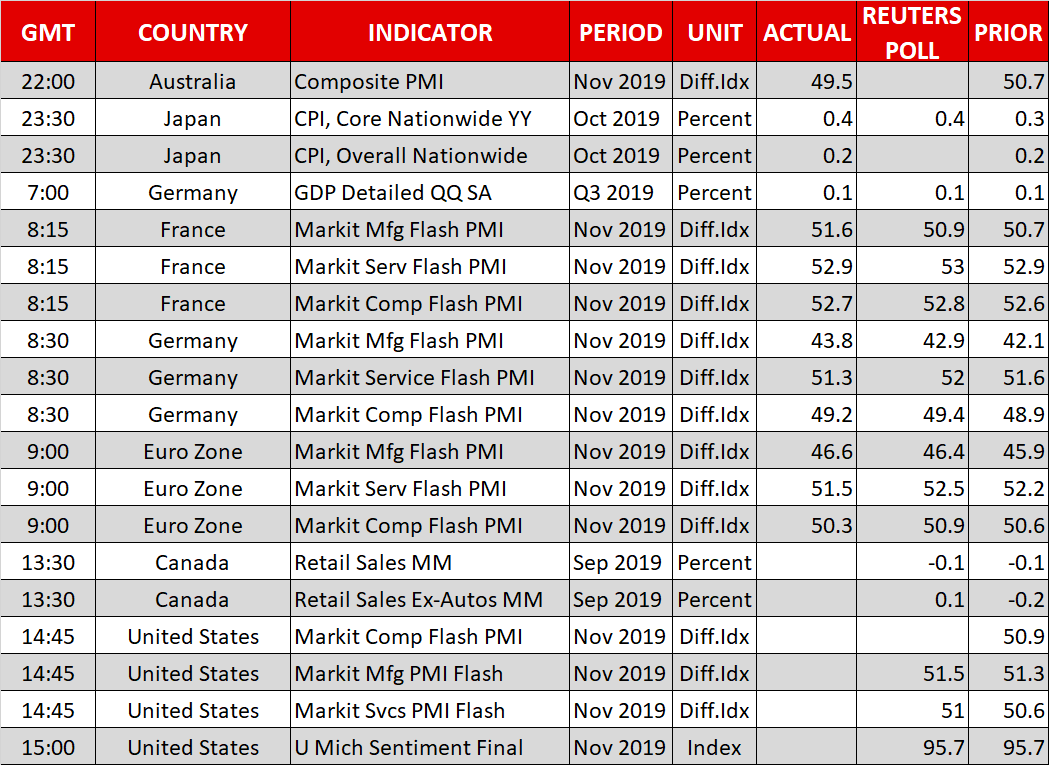