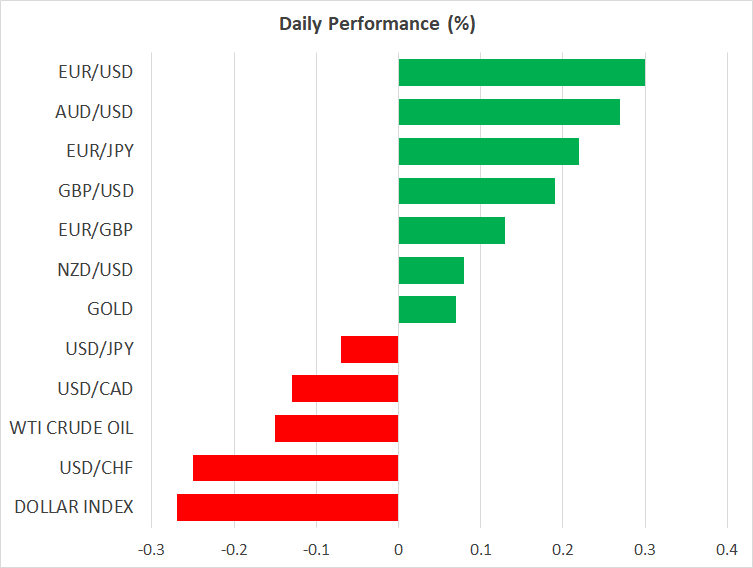 Positive sentiment dominated financial markets at the onset of the new week, with global stock indices and risk-sensitive commodities like oil edging higher, powered by a persistent slowdown in US infections and some encouraging manufacturing numbers. America reported fewer than 50k new cases for a second straight day, feeding optimism that the stricter measures imposed over the past month are finally paying dividends in slowing down the virus.

Meanwhile, the closely watched ISM manufacturing index overcame forecasts to touch its highest level in more than a year. Alas, let’s not confuse rising PMIs for a normalization in economic activity. These surveys ask companies how they are doing relative to last month, so if activity was depressed lately, it’s only natural for the index to rise sharply. It’s a step in the right direction, but it doesn’t mean growth is anywhere near pre-crisis levels.

Still, good news is good news and stock markets were more than happy to absorb them. The S&P 500 rose by 0.7% and is now just 3% away from its all-time highs, while the Nasdaq (+1.5%) set a new record of its own. The tech-heavy index was turbocharged by Microsoft, which jumped 5.6% after it expressed interest in buying TikTok’s operations in the US.

Earlier, President Trump warned TikTok will be banned in America unless it is bought by a US company, as Washington tries to limit Beijing’s ability to collect user data from social media platforms and ultimately curb its sphere of influence. It’s the latest escalation in the unfolding ‘new cold war’, and a stark reminder that with Trump lagging in election polls, he may resort to ramping up the aggression towards China to regain political momentum.

Things were not as exciting in the currency arena, with most major pairs trading in relatively wide ranges but closing little changed. Most of this was owed to a volatile dollar, which climbed early but surrendered most of its gains after the encouraging ISM data through the risk sentiment channel, as ‘good news’ is not necessarily good news for the haven-like reserve currency anymore.

It’s a strange phenomenon, but because the greenback is acting like a defensive asset, strong US data can now hurt it while disappointing ones might boost it – though the market reaction to any data is more muted nowadays.

Congress drags its feet, but markets don’t mind yet

Looking ahead, the bigger test for the dollar and equities will be Friday’s jobs report, and whether Congress will strike a deal on a new relief package. Sadly, Congress doesn’t seem ready to deliver, with House speaker Nancy Pelosi saying yesterday that an agreement is more likely next week. That may not sound like much of a delay, but with millions of Americans having lost crucial benefits already, the longer this deadlock persists the greater the risks for consumption.

Judging from recent price action, it’s safe to say that markets see this as just another tough negotiation that will ultimately bear fruit, because the stakes are too high if it doesn’t. As such, if this week concludes without a deal looking imminent, then this rosy outlook may be called into question and investors might take the opportunity to trim their risk exposure, though the eventual deal would likely reignite risk appetite.

Finally, the Reserve Bank of Australia meeting earlier today was relatively uneventful. Policymakers acknowledged the mounting risks to the recovery because of the virus resurgence in Victoria, but stopped short of signaling more stimulus. The aussie rose on the less-dovish-than-expected tone, albeit not much.