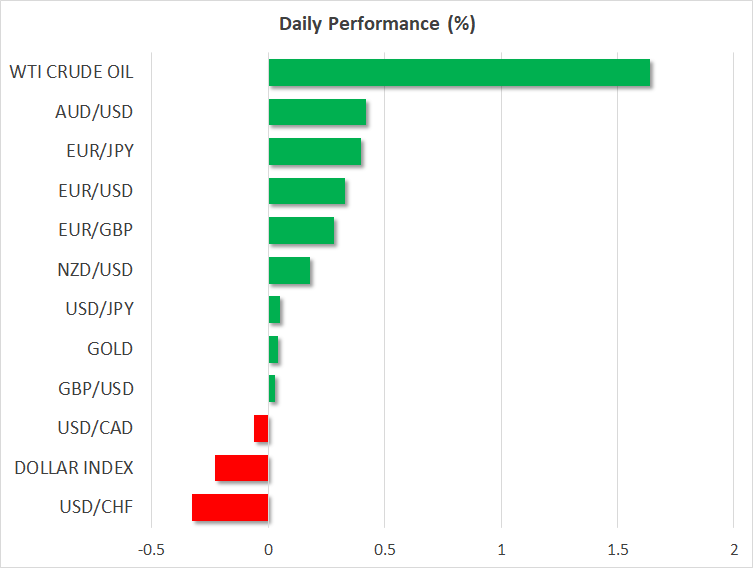 The bulls have taken the upper hand in financial markets to start the week, with global stocks surging alongside commodity currencies, even without any news behind the fresh optimism. Chinese markets are leading the charge, jumping more than 5% after a flurry of confident commentaries from state-owned media pushed the narrative that a new bull market is here.

The sanguine mood spilled over into other regions and assets, with futures tracking the major indices on Wall Street pointing to a ~1.3% gain when US markets open, while havens like the yen and dollar are getting crushed. Just looking at the charts, one might conclude that things are getting better quickly. After all, China relies on the rest of the world to buy its manufactured products, so if Chinese stocks are flying, doesn’t that mean investors are pricing in a rosier outlook for world demand? Maybe not.

Perhaps the real answer is that Chinese markets are soaring simply because there’s too much liquidity floating around in the global financial system that needs to find a home, rather than reflecting improving global demand.

US going in wrong direction

For one, the US virus situation is going from bad to worse, shattering hopes of a V-shaped recovery now that California, Texas, Florida, and Arizona have closed some businesses again to bring the outbreak back under control. Combined, these four states alone are home to almost 100 million people and account for roughly one-third of the US economy, so there’s a real risk of the nationwide recovery faltering if the situation continues to worsen.

Markets don’t seem worried though, which may come down to the death rate still being low, healthcare systems being better prepared, and expectations that the bar for another nationwide lockdown is extremely high if the White House has any say in the matter. Alas, recent studies suggest consumption is impacted more by health worries than by the lockdowns themselves, so if fear creeps back into people’s minds as the numbers spike, it could be just as bad.

Looking ahead, the cheerful mood could endure for now, as there’s nothing on the immediate horizon to ruin the party. Indeed, there seems to be some ‘weekend spell’ going on with the US virus numbers, especially those coming out of Florida, where the cases reported on Monday and Tuesday are much lower compared to those later in the week.

A set of better-looking numbers could add more fuel to the ‘risk trade’, but the latter part of the week is a different story, as aside from a potential spike in cases there’s also the weekly jobless claims that will reveal the initial impact of the reclosures on employment.

Aussie unfazed by tightening lockdowns, but RBA might care

In Australia, the Reserve Bank concludes its meeting overnight, and while no action is expected, there’s a chance of a more dovish-sounding narrative. Incoming data have been mixed, but what could tip the scales in favor of a more somber assessment is the latest lockdown in parts of Melbourne, where new virus clusters have emerged.

Melbourne is Australia’s second most populous city, so this is a scary sign, which might be reflected in the statement accompanying the decision, with policymakers strengthening their commitment to act again if needed. If so, the high-flying aussie could lose some altitude, though its broader direction will be decided by global risk sentiment and how US-China tensions evolve.

Before all that, the ISM non-manufacturing PMI for June will be in focus today.