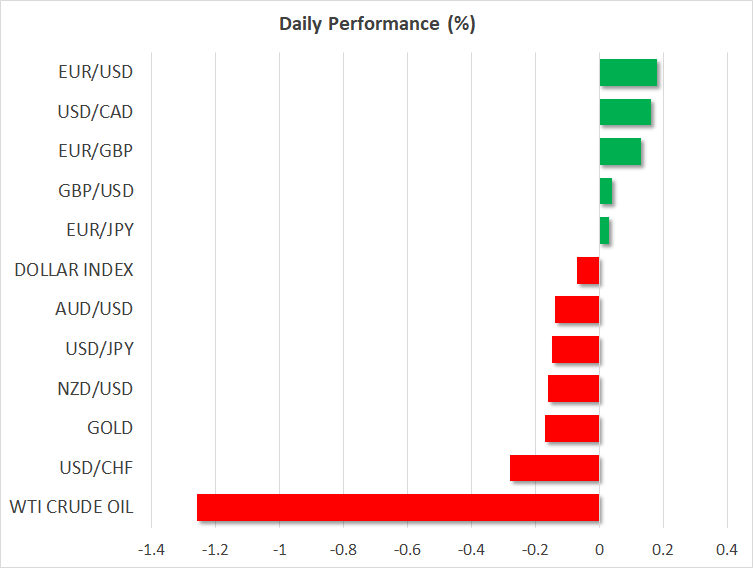 Nasdaq has best day since April

Wall Street ended its three-day losing streak on Wednesday, with all three major indices going some way in recouping the previous sessions’ heavy losses. The Nasdaq Composite and Nasdaq-100 soared by 2.7% and 3.0% respectively, enjoying their biggest one-day gain since April, while the S&P 500 closed up a solid 2%.

However, e-mini futures were struggling to stay positive today, with the Nasdaq Composite last indicated down by about 0.7%. European shares, meanwhile, opened mixed.

Although yesterday’s turnaround comes as a relief when considering the speed at which the mighty Nasdaq plummeted towards its 50-day moving average, clocking losses of 10% – the formal definition of a correction, today’s lacklustre performance doesn’t bode well for a sustained rebound.

Aside from the growing concerns about the exorbitant valuations in the tech sector, the realization that this recovery will likely be a long, slow process may also be discouraging investors from pushing inflated stock prices above current levels. However, the dimming prospect of an imminent injection of additional monetary and fiscal stimulus in the United States may also be weighing on the risk rally. After all, Congress is no closer to approving a new round of spending, while Fed chief Powell appeared happy with last Friday’s jobs report, calling it ‘a good one’.

Will Lagarde strike down the euro?

Away from the stock market mayhem, the European Central Bank’s policy decision, due to be announced at 11:45 GMT, is the day’s main focus. Markets had been gearing up for a potentially significant dovish tilt by the ECB at today’s meeting. However, a Bloomberg report yesterday poured cold water on the notion that the Bank is about to downgrade its growth forecasts. In fact, policymakers have reportedly become more confident about the trajectory of the Eurozone recovery, suggesting there’s little chance of any further policy action this year.

If the ECB keeps its economic projections largely unchanged, President Christine Lagarde will have a tougher job in convincing markets that further stimulus, should it be needed, will come without much hesitation. It would also be trickier for Lagarde to effectively ‘talk down’ the euro if investors sense unwillingness among the Governing Council to ramp up an already massive pandemic emergency purchase programme.

So it may all boil down to how concerned the ECB is about the risk of deflation in the euro area, with the forecasts on inflation possibly providing a better guide on future policy action.

Ahead of the announcement and Lagarde’s press conference (12:30 GMT), the euro was trading higher versus most of its peers, having clawed back above the $1.18 level on those headlines yesterday.

The pound also halted its downslide on Wednesday after plunging to a 6-week low of $1.2882 at one stage. It was steadier around $1.30 on Thursday but the days ahead look to be very bumpy for the currency.

Boris Johnson’s plans to override aspects of the law relating to the Northern Irish border in the Withdrawal Agreement as part of the UK government’s internal market bill has shocked the European Union as well as angered many Conservative MPs. The EU has warned it views such a move as a ‘clear breach’ of the divorce agreement and could even undermine the UK’s efforts to reach trade deals with other countries such as the US.

The two sides are due to hold emergency talks later today and the outcome of those discussions, as well as the regular update on round eight of the Brexit negotiations are likely to keep sterling in the spotlight for at least the rest of the week. For now, though, the fact that the EU has not called off the Brexit talks over the legal standoff is seen as a positive development, and this is providing temporary support for the pound.