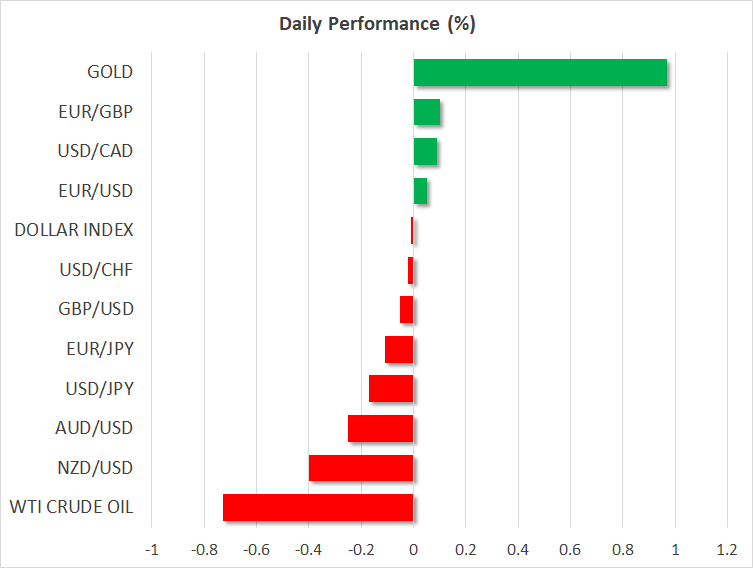 Market sentiment was mixed on Friday as ongoing trade uncertainty and a flare up in Middle East tensions were partly offset by growing expectations that the Fed will come to the rescue of a weakening economic outlook and cut rates.

Stocks around the world were on track for modest weekly gains even as investors fret over a deteriorating growth outlook. Major indices were boosted by energy shares as oil prices rallied following the attack on two oil tankers in the Gulf of Oman on Thursday.

The United States is blaming Iran for the attacks and says it has video evidence of Iran’s Revolutionary Guard’s involvement in the incident. However, the Iranian government has rejected the US accusation and fears are running high of a possible major conflict in one of the world’s busiest oil routes.

WTI and Brent crude prices surged by more than 2% on Thursday, with WTI falling back today, though Brent extended its gains to around $61.50 a barrel. The increases were relatively contained, however, considering the recent sharp decline in prices and the risk of a severe disruption to oil supply.

Any indication that the recent attacks in the region are developing into a wider military conflict could see oil prices posting substantially larger gains. The latest escalation also lifted gold, which tends to benefit from geopolitical tensions. Gold prices hit a 14-month high of $1358 an ounce today, with Fed rate cut expectations also supporting the precious metal.

Dollar looks to US retail sales for direction

The US dollar was broadly steady on Friday, though was struggling a bit against the safe-have yen, easing to around 108.15. Speculation about what message the Federal Reserve will communicate next week at its policy meeting is the main focus for traders as the week draws to a close. Retail sales numbers due out of the US later today could provide some clues as to what to expect.

A strong retail sales report for May is likely to keep the Fed in wait-and-see mode. However, disappointing figures, on top of the soft jobs report, would heighten the odds of the Fed cutting rates in the coming months as well as weigh on the greenback.

The dollar’s weekly advance means other majors were headed for losses. The euro, pound and the antipodean pairs all remained on the backfoot on Friday. The Australian and New Zealand dollars were on track to be the week’s worst performers as rising expectations that the RBA and RBNZ will be forced to make additional rate cuts weighed on the two risk-sensitive currencies.

Global trade frictions and slowing growth in most advanced economies is making it difficult for the Australian and New Zealand central banks to lift inflation to their target, prompting them to cut rates in recent weeks. But investors are increasingly certain that neither the RBA or RBNZ are done with easing just yet and that more is on the way.

Weaker-than-expected industrial production data out of China today and a disappointing manufacturing PMI in New Zealand only added to the growth worries. The aussie slid to a 3-week low of $0.6889 earlier in the session, while the kiwi touched a 1½-week trough of $0.6525.