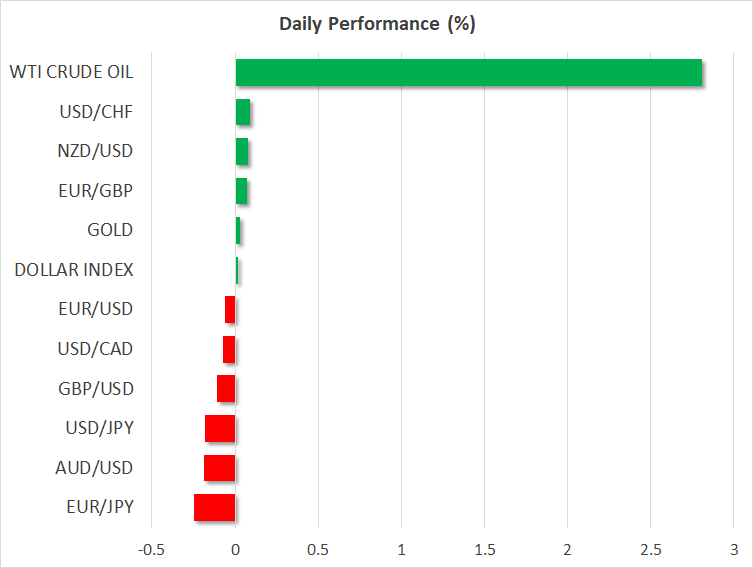 Fed Chairman Jerome Powell’s much anticipated speech took centre stage on Wednesday as the head of the world’s most powerful central bank delivered a detailed but grim view of the American economy. As living with the pandemic forcibly becomes the new reality, Powell cautioned that the recovery “may take some time” and that a prolonged recession may “leave behind lasting damage to the productive capacity of the economy”.

His words were a blow to the optimism that had been building in the markets over the last few weeks as the relaxation of social distancing restrictions in the United States and elsewhere had generated expectations of a V-shaped recovery from the virus crisis.

But in a further setback for investors, Powell reiterated that negative interest rates were not on the cards, saying “the committee’s view on negative rates really has not changed”. Speculation has been rife in recent days that the Fed will soon be next in adopting negative rates after Fed fund futures turned negative for the first time ever.

President Trump, who has been advocating negative rates for some time, waded into the debate by voicing his disagreement with the Fed’s position. But that was not the only stance by Trump that worried investors as Republicans have rejected Democrats’ proposal for another $3 trillion lifeline for the US economy, even as Powell calls for more fiscal support.

Powell’s bleak outlook of the economy rattled equity markets, which were already reeling from fears of a second wave of infections of COVID-19. The three leading indices on Wall Street fell sharply for a second straight day on Wednesday and e-mini futures suggest stocks will struggle again today, with S&P 500 futures last down 0.2%.

Even tech stocks appear to have lost some of their shine, though this might just be the excuse sellers needed to take some profit given the incredible rebound the Nasdaq Composite has enjoyed since mid-March.

In currency markets, the US dollar advanced slightly higher against a basket of currencies as it eyed three-week highs. With the Fed seemingly closing the door on negative rates, a major downside risk has been removed for the greenback, which continues to attract safety flows as the world’s reserve currency during this global health emergency.

The yen and the Swiss franc were also broadly firmer on Thursday as risk sentiment worsened after Powell’s address. This left all other countries exposed to the market mood, with the Australian dollar being the worst performer after it came under pressure from worse-than-expected job losses in Australia in April.

The kiwi followed the aussie lower to hit 3-week lows, having already been on the backfoot after the RBNZ flagged negative interest rates yesterday. The loonie was a little steadier, helped by higher oil prices.

But the stand-out currency was the pound, which continued to underperform for the month as concerns grow about not only how well the UK government is managing the virus spread but how it will pay for the huge deficit that it is running to keep businesses afloat.

The euro was surprisingly having a calmer day despite the ongoing battle between Germany and the European Central Bank over the legality of the Bank’s massive asset purchase program.

Looking ahead to the rest of the day, the weekly jobless claims number out of the US is the main event on the agenda.