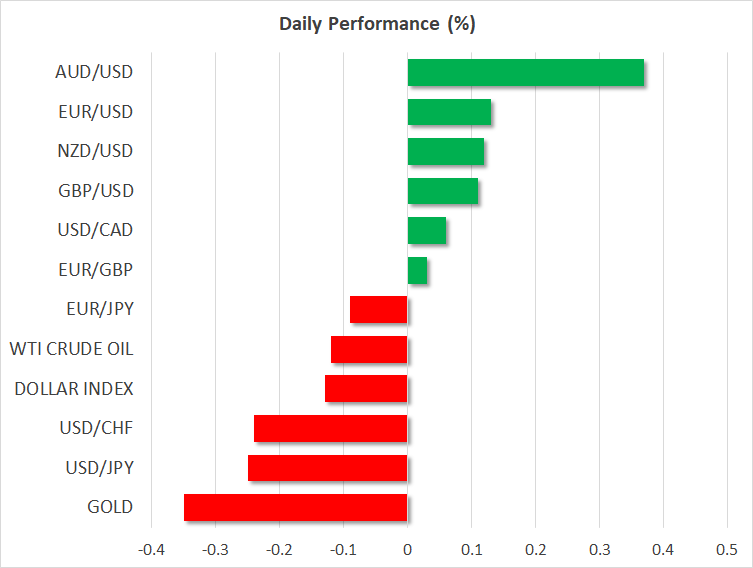 The world’s reserve currency retreated almost across the board on Wednesday and continues to surrender ground today, falling in tandem with longer-term US interest rates as worrisome trade signals prompted traders to boost bets for aggressive Fed rate cuts. Specifically, recent reports suggest the US-China talks are stuck in limbo, with no real progress being made amid internal US disagreements over how to treat Huawei.

Coming on the heels of comments from Trump that he may impose more tariffs, and combined with the fact that the two negotiating teams haven’t even met in person since the ceasefire, markets interpreted this as raising the odds for a breakdown in the talks. Consequently, the odds for the Fed to deliver a ‘double’ rate cut of 50 basis points (bps) in two weeks’ time jumped to ~33%, from ~25% earlier.

While the dollar’s drop was relatively modest in magnitude, the move underscores that the US currency is no longer acting as a safe haven on trade issues, given the implications for Fed policy. Even though the Fed is certain to cut rates by 25bps in July, a 50bps move still seems excessive with the domestic economy remaining solid and the central bank having limited firepower. As such, the dollar may have some more scope to recover in the near term, even despite the bigger picture pointing to long-term weakness.

The darkening trade outlook also took its toll on equity markets, with the major US stock indices closing in the red yesterday, and futures pointing to a lower open today. On the opposite side of the ‘risk spectrum’, both the yen and gold soared, the latter also benefiting from a weaker dollar. Separately, some disappointing export data from Japan overnight may have fed the narrative that the global economy is slowing, contributing to the risk aversion.

Defying the risk-off mood, both the aussie and the kiwi are trading higher today, partly due to the softer greenback but also due to some decent employment data from Australia overnight. While the overall jobs report was slightly weaker than expected, the fact that the unemployment rate held steady dampened expectations for an August rate cut by the RBA, pushing the aussie up.

Sterling is on the mend for a second session, following the selloff earlier in the week. Some remarks by EU chief negotiator Barnier today that he is willing to work on “alternative arrangements” for the Irish border helped the rebound, though Cable remains capped below the 1.2470 mark, which was the December low.

UK retail sales are on tap today, though as usual, politics will probably overshadow economics.

While Barnier’s signals are certainly encouraging, they aren’t enough to change even the short-term outlook for sterling. There are no easy solutions to the Irish backstop, as years of back-and-forth negotiations have revealed, and more importantly Boris Johnson recently said that the backstop is “dead” even if a time limit is attached to it. The bottom line is that any recovery in the pound may remain short-lived, unless something substantial changes in Brexit, like a General Election being thrown into the mix. 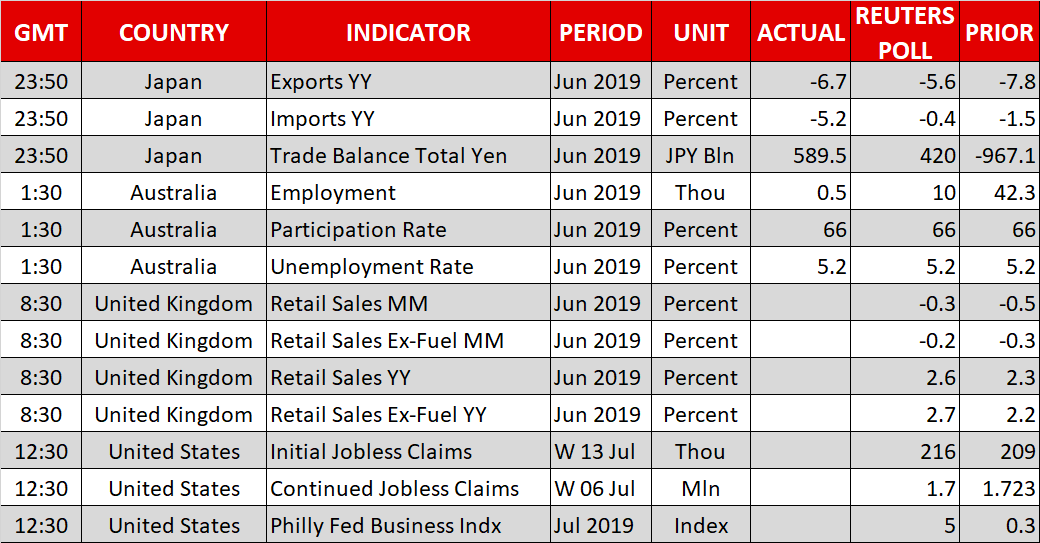