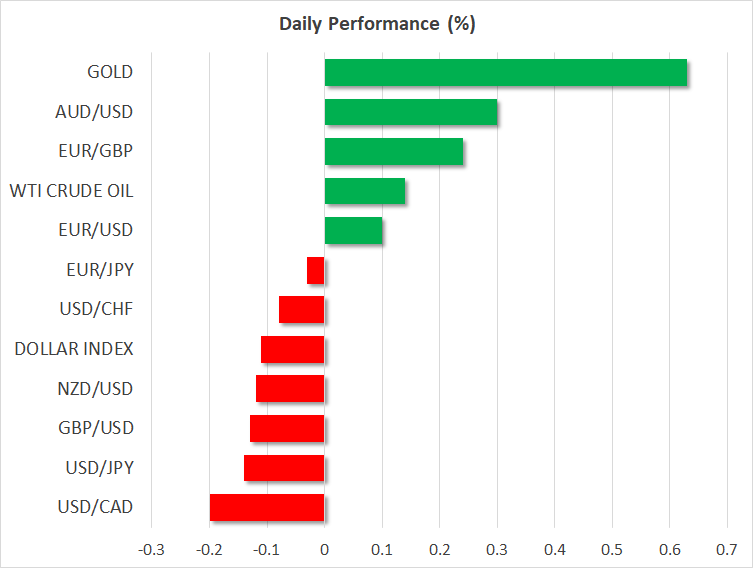 RBA cuts, but can’t keep the aussie down

The Reserve Bank of Australia (RBA) slashed interest rates earlier today, for the second time in two meetings, indicating that the move will help reduce unemployment and boost inflation. The cut was widely signaled in advance and largely priced in ahead of the event, so even though the aussie dropped a little on the decision, it quickly recovered all its losses to trade even higher.

The currency’s resilience may be owed to the RBA appearing somewhat reluctant to commit to any further cuts, noting instead that any more moves will depend on the quality of incoming data. In other words, having cut twice already, the Bank may now move to the sidelines for a while.

As for the aussie, the picture seems to be turning cautiously positive. Another RBA cut by December is priced in with an ~80% chance, and given that the Fed is now also preparing to ease along with the likes of the ECB, monetary policy is not a clear negative force for the aussie anymore. Separately, the trade war may be about to enter a ‘quiet period’ as talks resume, implying that there may be room for a relief rally.

The world’s reserve currency enjoyed a good run on Monday, outperforming all its major peers as traders scaled back bets for an aggressive 50 basis points (bps) rate cut at the Fed’s upcoming policy meeting. The move followed the ISM manufacturing PMI for June, which declined by less than expected, confirming that the situation isn’t dire enough for the Fed to ‘shock’ markets with more easing than is expected.

A typical 25bps rate cut is still fully priced in for the July gathering, but the probability for a larger 50bps reduction has declined to 15%. Assuming no major disappointments in the non-manufacturing PMI tomorrow or in the payrolls report on Friday, that percentage may drift towards zero as the meeting draws closer, helping the dollar to extend its latest rebound.

That said, the bigger picture remains grim. The Fed has a lot more ‘firepower’ with which to ease than any other major central bank, so the dollar’s potential downside during a prolonged global easing cycle would likely be far greater than that of its peers.

As for today’s highlights, the calendar will be dominated by more PMI releases for June. The UK construction index is due out today, while China’s Caixin services survey will follow overnight.

In Europe, negotiations to decide who will get the EU’s top jobs – the presidency of the Commission, Council, and Parliament – will resume today. While not so relevant for markets per se, who is chosen (and from which countries) could be crucial in deciding who succeeds Draghi at the helm of the ECB.

In oil markets, sources suggest OPEC has agreed to extend its supply cuts for nine months. The market reaction was muted, with oil prices now likely to take their cue from how the trade talks and the situation with Iran unfold.

Finally, the Fed’s Williams (10:35 GMT) and Mester (15:00 GMT) will deliver remarks. Both are voting FOMC members this year, so any signals about the July meeting could be vital.