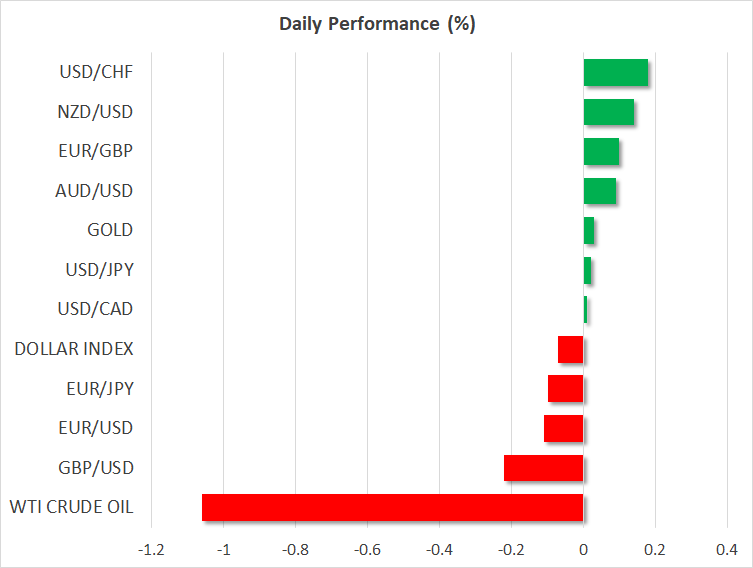 US jobs report smashes forecasts but fails to lift markets

The latest nonfarm payrolls report did little to dent expectations of a V-shaped recovery as a record 4.8 million jobs were restored in America in June, beating forecasts of an increase of 3 million. The US jobless rate now stands at 11.1% – a significant drop from the 14.7% peak in April but nevertheless high by historical standards as there are still about 15 million Americans who are out of work.

Upbeat services PMIs are rounding up a week of encouraging economic data from across Asia, Europe and North America. China’s Caixin/Markit services PMI reached the highest in 10 years in June – signalling an acceleration in growth in the world’s second largest economy.

However, there is growing doubt about whether the V-shaped pattern will be sustainable going forward, particularly in the US where the outlook is becoming increasingly clouded by the resurgence of the coronavirus. The US reported more than 50,000 new virus cases on Thursday – a daily record – as the flare-up shows no sign of subsiding.

Many US states have stalled plans to reopen their economies and some have reversed recent lockdown easings as hospitalizations continue to soar in the worst-hit regions.

The deteriorating virus situation in America finally seems to be worrying investors as the boost from the robust jobs numbers quickly lost momentum on Wall Street. All three main indices closed just 0.5% higher on Thursday, though the Nasdaq Composite still managed to post a new record.

US stock futures were up between 0.1% and 0.2% at the European open, with the lacklustre trading likely to continue for the rest of the day amid thin volumes as the US market is shut today for the 4th of July holiday.

Chinese stocks once again outperformed, with the CSI-300 index surging to a 5-year high, as the government steps up fiscal and monetary easing in the country.

In the FX world, most pairs were confined to their recent ranges, unable to find direction from the NFP report. The US dollar was marginally in the red against a basket of currencies today, having oscillated in both directions on the jobs data but ultimately ending Thursday little changed.

Despite signs of investors becoming more wary about the outlook, however, the overall mood is still that of risk-on, even though it is weakening. This is evident in risk-sensitive currencies like the aussie and the kiwi.

The Australian dollar has been edging higher all week, getting an additional lift from very strong retail sales figures out of Australia today. The euro barely budged, however, from an upward revision to the Eurozone’s services PMI for June, while the pound slipped back below $1.25 on reports yesterday that Brexit talks ended early. Cable was steadier today as it emerged that UK-EU negotiations will resume next week and that the two sides are beginning to agree on an outline of a ‘landing zone’ for an eventual deal.

As July gets underway, investors are likely to turn their focus on stimulus once again as EU leaders are struggling to find a compromise on a European recovery fund and the US Congress has yet to decide whether to extend the unemployment insurance benefits, which expire at the end of the month.

The importance of those fiscal packages in aiding the recovery in the European Union and the United States and the implications of no agreement being reached on the extra stimulus is one of the factors that’s keeping markets trapped in a neutral range. Until those outcomes are known, investors may decide to sit on the sidelines amid conflicting virus and economic news.