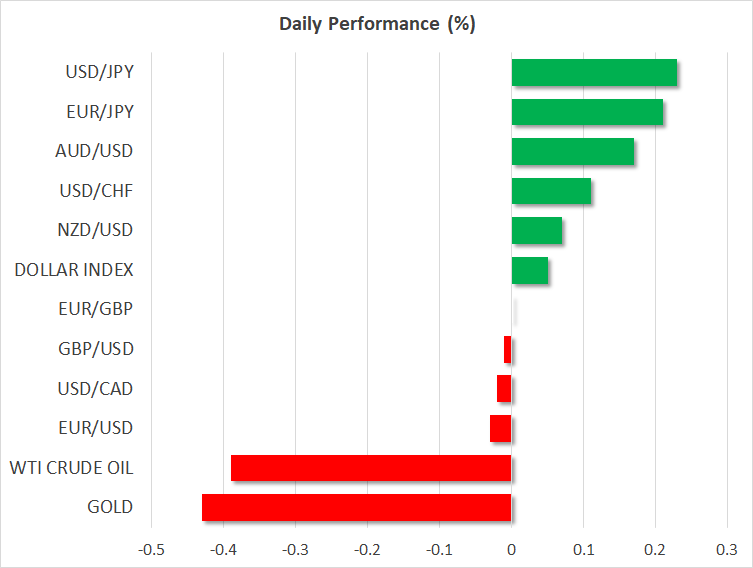 Signs that the US and China were moving close to reaching some sort of a truce over their trade dispute lifted market sentiment on Thursday. According to a Chinese newspaper report, the US and China have tentatively agreed to a trade truce, setting the ground for Presidents Trump and Xi to hold a much-anticipated meeting on Saturday on the sidelines of the G20 summit in Japan.

The agreement reportedly involves the US putting off any additional tariffs on Chinese imports. However, the report has not been confirmed by the Chinese government and in an interview with Fox Business yesterday, Trump maintained his threat of imposing tariffs on the remaining $325 billion worth of imports from China if no deal is reached.

Nevertheless, the overall tone from both sides has become more positive in the lead up to the summit, with President Trump saying “It’s absolutely possible” to get a good deal.

The US dollar extended its recovery, testing the 108 level versus the yen and climbing to a near one-week high against a basket of currencies. Equities were also bolstered, with Japan’s Nikkei 225 index closing 1.2% higher and S&P 500 futures pointing to gains of 0.5%.

Declining odds that the Fed will opt for a 50-basis points rate reduction instead of a 25-bps cut at its July meeting is the other driver of the dollar’s rebound this week. Fed Chairman Jerome Powell tempered expectations of aggressive reductions in borrowing costs when he spoke earlier this week, leading to a partial reversal in the greenback’s fortunes.

However, the dollar’s recovery has been more prominent against the safe-havens yen and Swiss franc, which are being additionally weighed by the easing risk aversion. Gold has also lost some of its allure, at least in the short term, as investors adjust the pace of rate cuts by the Fed. The yellow metal came close to breaching the $1400 level today, though it remains not too far from the 6-year highs scaled earlier this week.

But other majors such as the euro, loonie, aussie and kiwi have held on to most of their recent gains. One exception is the pound, which has come under renewed pressure, slipping back below $1.27, on fears that the next person who becomes the UK’s prime minister will take the country out of the EU without a deal.

The commodity-linked Australian, New Zealand and Canadian dollars have all been able to extend their gains even after the Fed cast doubt on big rate cuts in the coming months. Although, both the RBA and RBNZ have clearly signalled that more rate reductions are likely, the Fed has more room to slash rates, which potentially creates a bigger downside scope for US yields and the dollar versus Australian and New Zealand yields.

The loonie, meanwhile, is benefiting from paring back of expectations that the Bank of Canada will lower rates and could even hike rates as the economy rebounds from a soft patch. Higher oil prices are also supporting the Canadian currency. WTI and Brent crude jumped yesterday on an unexpected plunge in US crude oil inventories. However, prices fell back today amid caution ahead of the July 1-2 meeting of OPEC and non-OPEC countries when major producers will decide whether to extend the current deal to cap output. 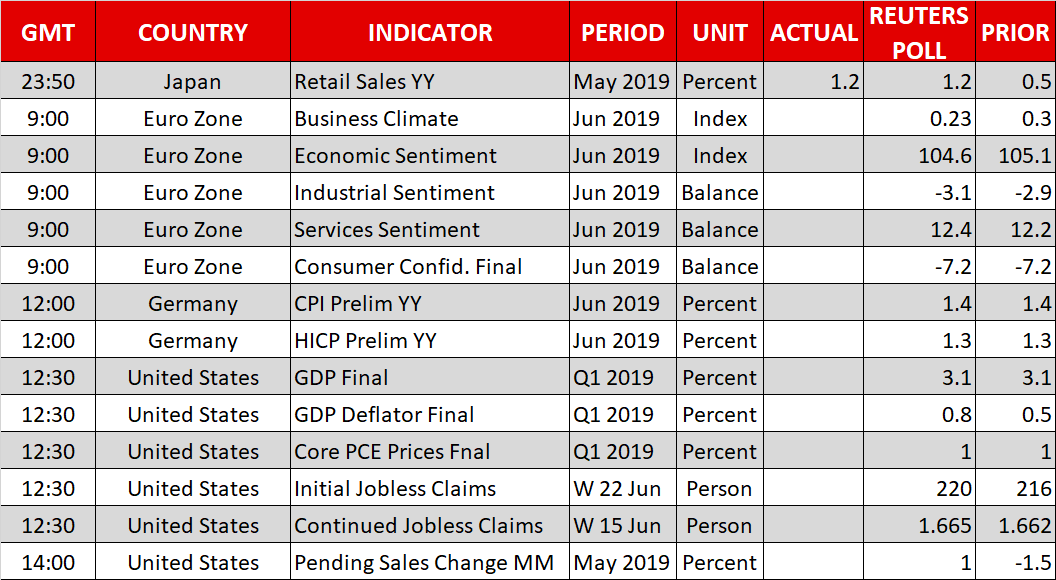