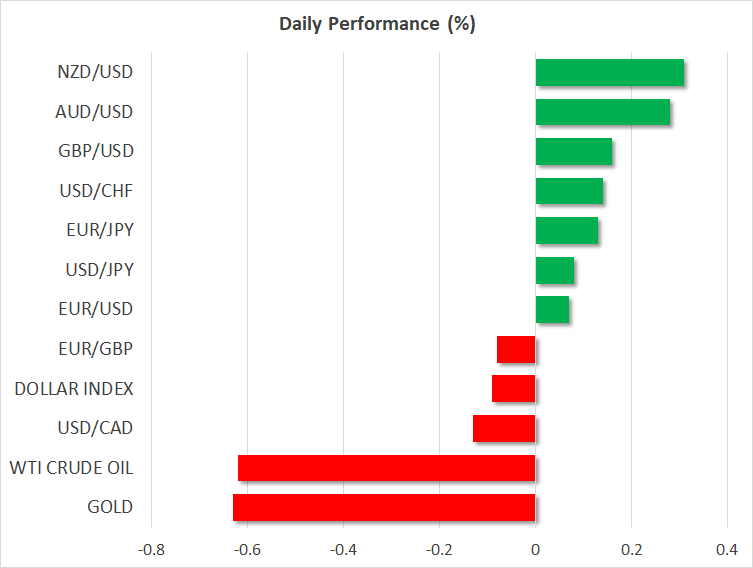 Traders were greeted with positive developments on all fronts on Thursday as the United States and China finally agreed on the basis for a new round of high-level talks, while the easing of political turmoil in Britain and Hong Kong also lifted sentiment.

Stocks in China surged by about 1%, following similar gains on Wall Street overnight, and the Nikkei 225 index in Japan jumped by 2.1%. European equity futures suggest shares on the continent are also headed for strong gains.

Safe havens on the other hand fell back, notably the yen, Swiss franc and gold. The moves were limited, however, with gold edging lower by about 0.25%, while the yen held within recent trading ranges even as it weakened to 3-week lows versus the US dollar.

The bounce in government bond yields was also modest as investors were wary that the latest turnaround in events may not last. Another reason for traders to be cautious is doubts about the Fed’s rate cut path. Fed Chairman Jerome Powell is due to speak in Zurich tomorrow and could provide the last major policy clue ahead of the September 17-18 FOMC meeting, while the US jobs report for August will be closely watched too.

The pound enjoyed its biggest one-day rally against the dollar in five months on Wednesday after the UK government was heavily defeated in Parliament as MPs swiftly approved legislation that would force the prime minister to seek a further Brexit extension from the EU before the October 31 deadline. The pound advanced back above $1.22, having traded as low as $1.1957 a day earlier.

But while the move has averted the imminent threat of a no-deal Brexit, things are far from clear and there’s the possibility the government may choose not to abide by the law if Johnson is still in power by the end of October.

The prime minister suffered a second blow yesterday after Labour abstained from a vote on whether there should be a snap election. Labour were fearful of agreeing to a general election before the legislation of stopping a no-deal Brexit was fully passed. But now that has been achieved, they will likely support an election, though its unclear whether they will call for one before or after October 31.

Having lost control of Parliament, Johnson wants to put the decision on how to proceed with Brexit to the British people and will reportedly make an address to the public at 15:00 GMT. With the Conservatives comfortably ahead in the polls, the risk for sterling remains distinctly to the downside, as, even if Brexit is delayed, a Johnson government that wins a majority after snap elections could threaten to take Britain out of the EU without a deal at a later date.

US-China trade talks back on track

There was some much-needed good news for the long, drawn-out trade conflict between the US and China as the two sides agreed to make preparations for the next round of ministerial-level talks expected to take place in early October. Although investors have become increasingly doubtful about President Trump’s commitment to reaching a trade deal with China, any sign of even a temporary de-escalation is welcome by the markets in a deteriorating global economic environment.

Risk-sensitive currencies were the biggest gainers from the positive trade headlines, with the Australian dollar climbing to a one-month high above the $0.68 level and the kiwi rising to one-week highs.

The Canadian dollar was also firmer, extending its gains from yesterday when it was boosted from a not-so-dovish Bank of Canada statement following a policy meeting.

But the focus later in the day is expected to turn back to the US economy as the ADP employment report and the ISM non-manufacturing PMI are due out of the US. 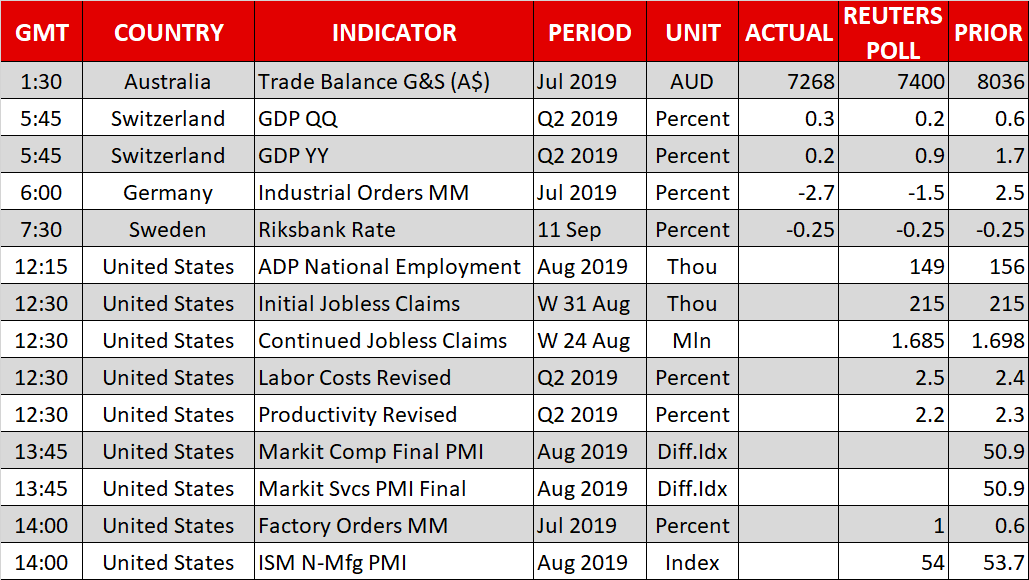