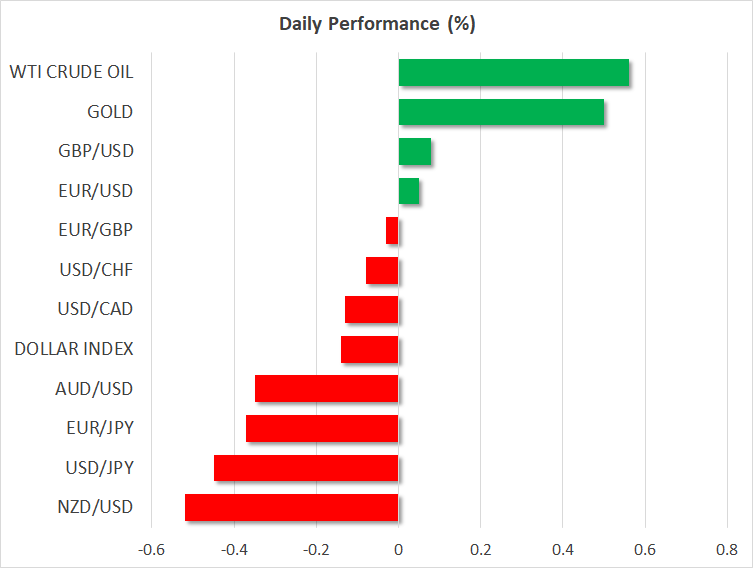 Global risk appetite recovered on Monday, following some encouraging signals on trade by the US President at the G7 summit. Trump said that Chinese officials had called the American negotiators in order to ‘get back to the negotiating table’, and he also predicted that a deal is still likely, calming some worries about a further escalation in the trade battle. US stock markets rose by ~1%, while the aussie outperformed in the FX spectrum. The dollar advanced as bets for aggressive Fed action were scaled back.

However, this rebound seems to have been short-lived and investors are back on the defensive today, with the yen being the star performer and the aussie sinking alongside the kiwi. Perhaps markets are digesting the sharp contrast between Trump’s conciliatory rhetoric and the hostile policies he has rolled out lately.

Taking a step back, nothing has fundamentally changed, and the risks are still skewed towards another escalation in tensions. China will inevitably retaliate against Trump’s latest levies and the countermeasures may fall outside the realm of tariffs this time – Beijing could for example restrict rare earth exports or punish large US firms by including them in its upcoming ‘unreliable entities list’.

The bottom line is that any deal is still far away given rising tensions and stark disagreements on the biggest issues, even if the two negotiating teams meet again soon. Therefore, the broader trend of risk aversion may be here to stay, implying that the outlook for the yen remains positive, and that for the aussie negative. Stocks are a trickier beast, because even though the trade war argues for losses, central bank easing can keep them afloat.

In the UK, the spotlight as usual will be on politics. Opposition lawmakers will meet today to discuss ways of stopping PM Johnson of crashing the UK out of the EU in October without a deal. Johnson only has a majority of one MP in Parliament, so if opposition parties work together and a few Tory ‘rebels’ join in, a caretaker government could be formed to ask for a Brexit delay and organize an early General Election.

The question is, will these parties support the leader of the opposition – Jeremy Corbyn – to head any caretaker government? The Liberal Democrats already said they won’t, describing Corbyn as “divisive”. If Corbyn insists on becoming the interim leader, and the Lib Dems refuse to work with him, that could implicitly make a no-deal Brexit more likely and by extension, bring the pound under renewed selling interest.

ECB & BoE speakers eyed, with Italian politics in the background

The only noteworthy data release today is the US consumer confidence index for August, which may attract special attention for clues on whether the trade uncertainty is starting to impact the American consumer.

In Italy, coalition talks continue. Hopes for a market-friendly government consisting of the M5S and PD are riding high – an outcome that may support Italian assets and to a lesser extent, the single currency.