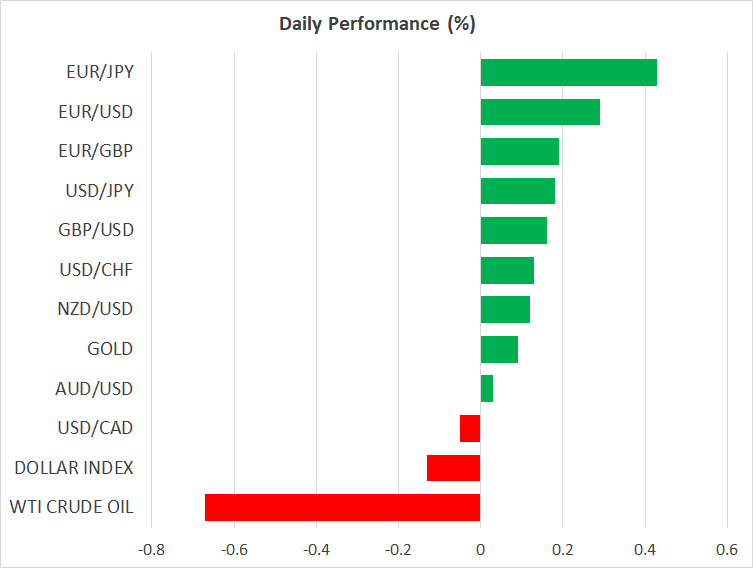 No deal yet but the euro is soaring on positive signs that European Union leaders are close to reaching a compromise on how to allocate a €750 billion recovery fund to assist virus-stricken member states. In a surprise move, EU leaders decided to extend the talks into and beyond the weekend rather than schedule another meeting, signalling that they are committed to getting a deal as soon as possible, and this is boosting the euro.

The single currency has climbed to 4-month highs against its US counterpart on the back of the growing optimism, with talks set to continue later today. The latest reports suggest the ‘frugal four’, consisting of Austria, Denmark, Sweden and the Netherlands, may be able to live with a reduced sum of €390 billion in grants, versus the original proposal of €500 billion.

While this would mean that the poorer and worst-affected countries would receive a higher portion of aid in loans instead of EU handouts, the market reaction indicates traders are not overly concerned about the structure as long as the total package remains at €750 billion.

US virus bailout in spotlight too

Fiscal stimulus will also be the focal point in the United States over the next couple of weeks as Republicans are due to unveil a $1 trillion package, far short of the $3.5 billion proposed by the Democrats. Time is running out to renew the unemployment and other benefits from the CARES Act that will expire at the end of the month if Congress does not agree on a fresh round of spending.

President Trump is expected to hold discussions with GOP leaders later today to finalize the details of the new virus relief bill amid falling approval ratings over his handling of the coronavirus crisis.

The daily increase in new infections over the weekend in America held close to last week’s record numbers, as more US counties and states put on hold plans to reopen schools and businesses, while the mayor of Los Angeles warned the city could be shut down again.

Virus cases are escalating rapidly in other countries too, including Brazil, India and South Africa. Even places where the spread had previously been contained are seeing a resurgence, with Hong Kong becoming the latest to face a fresh outbreak.

The growing notion that the virus is here to stay may finally be taking the steam out of the risk rally that has been fuelled by the flood of stimulus and hopes of a strong recovery. So far, the data has been supportive of the market’s view of a V-shaped rebound but there’s a risk that once the July numbers begin to roll in, investors will be staring at a very bumpy road ahead.

Dollar and yen falling out of favour?

Still, looking at the US dollar, there’s little sign of panic just yet as the currency has been steadily drifting lower during July against a basket of currencies, while another safe-haven favourite – the yen – has also been mostly on the back foot since late June.

But as the euro powers ahead, commodity-linked currencies such as the Australian dollar, which are the most sensitive to global risk sentiment, remain range-bound in the short- to-medium-term picture, mirroring equities.

Earnings season yet to fire up stocks

Shares on Wall Street were mixed on Friday and it’s a similar story today as earnings caution, fears of a tech bubble and worries of an uneven recovery appear to be keeping risk appetite in check. US stock futures edged lower after a mixed session in Asia and a negative start in Europe.

Earnings season will get into full gear this week as Microsoft, Coca-Cola, Intel and United Airlines report their results amongst others. With most companies that have already reported handily beating their estimates for the second quarter and more expected to do the same as analysts have set a very low bar, this earnings season may not necessarily do much in setting the next direction for equity markets. Moving forward, attention will likely move increasingly towards potentially bigger risks for the US, such as the next fiscal stimulus package and the presidential election in November.