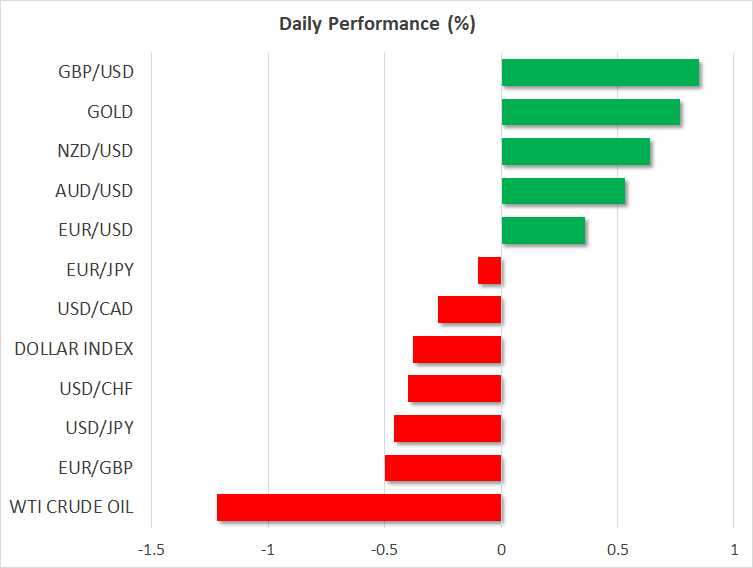 Growing optimism that a bipartisan deal on a new coronavirus aid package in the United States is within reach lifted equities on Wednesday while investors dumped the safe-haven US dollar. Talks between House Speaker Nancy Pelosi and Treasury Secretary Steven Mnuchin continue to make progress, with the negotiations expected to extend at least into Wednesday.

However, there’s no word yet on a definite timeline of when a deal is likely to be struck, raising the prospect that any new stimulus bill would have to be put to a vote after the presidential election on November 3. But the bigger challenge will be to convince Senate Republicans, who hold a majority, to accept the deal as their leader, Mitch McConnell, continues to oppose a large package.

The size of the new relief bill is anticipated to be at least $1.8 trillion, with President Trump indicating he would be happy to go even higher. But many within his Republican party are strongly against huge stimulus packages that would push up borrowing and instead favour smaller stand-alone bills.

The question is, if a deal is made, will the GOP deficit hawks in the Senate succumb to pressure from the White House as well as the American public or will they stand their ground?

Those worries held back advances on Wall Street on Tuesday, with the S&P 500 closing just 0.5% higher. E-mini futures were pointing to a flat open today as apart from some doubts about the stimulus talks, disappointing earnings also cast a shadow.

Netflix reported much worse than expected Q3 results after yesterday’s closing bell amid signs the lockdown effect on revenue for some tech firms has started to fade. This could be one reason why the Nasdaq Composite has been lagging its peers over the past week. The next ‘tech giant’ to report its earnings is Tesla, which will announce its results after today’s market close.

Another concern undermining the positive mood is a narrowing of Joe Biden’s lead over Trump in some battleground states, suggesting a Biden victory is far from secure and the US election result may yet end up being contested.

But in the immediate term, investors appear to be focusing on the stimulus narrative, selling off the greenback, and to a lesser extent, the yen and the Swiss franc.

The dollar’s weakness comes even as Treasury yields jump to 4-month highs on the back of the rising odds of a big fiscal stimulus. The dollar index has plunged to one-month lows as the euro and pound power ahead.

The euro, in particular, has rallied more than 1% this week, climbing above $1.1850. While dollar softness seems to be the main factor behind the single currency’s strength, yesterday’s phenomenal demand for the European Union’s first sale of euro-denominated bonds as part of its virus rescue package also likely boosted demand.

The pound meanwhile shot higher after the EU reiterated that it remains committed to reaching a compromise on a post-Brexit trade deal with the UK, sending the currency above $1.30.

Gold was another winner on Wednesday, scaling a one-week high above $1,920/oz as the dollar lost ground. In the bigger picture, however, gold’s downtrend remains intact, with a stimulus announcement and the outcome of the US election likely to be the biggest potential catalysts to breaking this trend.