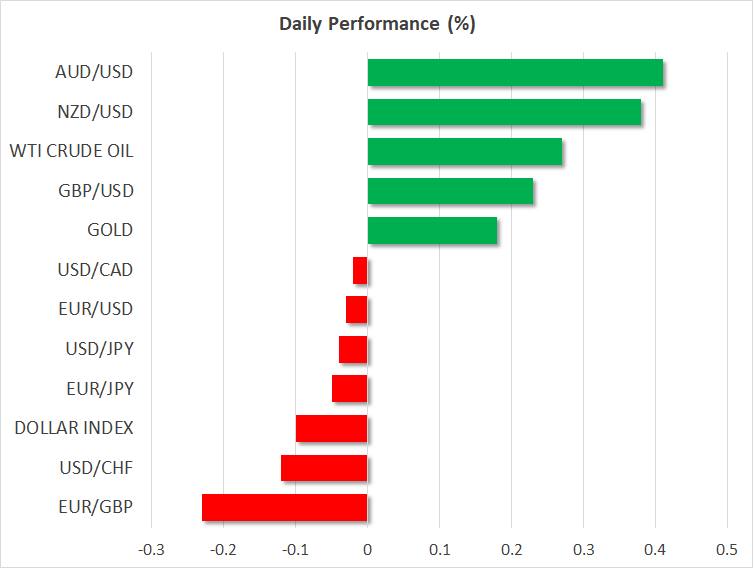 Fresh efforts to break the stalemate in the negotiations for a new virus relief bill in the United States have provided a much-needed boost to sentiment in a week where markets have been struggling to find anything to cheer about. Treasury Secretary Steven Mnuchin and House Speaker Nancy Pelosi have reportedly been in discussions to restart negotiations on a new compromise bill aimed at supporting the US economy through the virus crisis.

But while the fact that the White House and Democrats are talking again is a positive step in reaching a bi-partisan deal, there is deep scepticism about whether an agreement is possible. Democrats in the House of Representatives are drafting a package in the region of $2.4 trillion, far above the $1.5 trillion that President Trump has signalled he is willing to accept and well above the cap of $1 trillion that Republicans have set.

With the time window to negotiate and pass a bill before the November 3 election closing fast, the latest attempt at a deal could be just a ploy by both sides to blame each other in the election campaign if they fail to agree on a new fiscal package.

But nevertheless, the move has revived some optimism among investors that all is not lost, helping risk assets recoup some of the week’s losses. Wall Street closed higher on Thursday, led by the Nasdaq Composite (0.4%), and e-mini futures were indicating gains of about 0.3% at today’s open. Shares in Europe were mixed, however, as worries about the region’s economies grow amid signs the coronavirus spread is getting out of hand again.

Those concerns also held back the euro even as other downtrodden currencies rebounded as risk appetite improved slightly. Euro/dollar appears to have entered a consolidation phase as recent indicators point to the Eurozone recovery losing steam and being in danger of faltering, while the US economy is proving far more resilient than anticipated despite the withdrawal of some fiscal stimulus.

Virus cases across Europe have been on the up since August and are showing no sign of slowing. France and the UK recorded their highest daily figure on Thursday and the number of daily cases in Spain stayed above the 10,000 mark. The outbreak is likely to get worse as the colder weather sets in and there is a growing fear that full lockdowns may be inevitable if hospitals become overwhelmed again as the current approach of targeted restrictions does not seem to be very effective.

But the near-term outlook for the US is not problem-free either as the country is facing significant election risks. Investors are becoming increasingly nervous about the prospect that the outcome of the presidential election won’t be decided on November 3 if it is contested and that there may not be a smooth transition of power if Biden wins.

The political uncertainty is likely to be positive for the US dollar in the short term but could work in favour of the euro if it begins to hurt confidence in the US economy.

In other currencies, the Australian dollar led the gainers on Friday, bouncing back strongly from yesterday’s two-month lows. Nevertheless, the aussie is set for its worst month since March as traders have been forced to reassess their rate cut bets after unexpectedly dovish remarks by the RBA recently.

The pound also clawed back some losses versus the greenback, briefly topping the $1.28 level, as the currency found support from the latest fiscal measures announced by the UK’s finance minister, Rishi Sunak, yesterday. Sunak outlined his latest plans in Parliament to help businesses during the winter months, including a new wage support scheme, which although isn’t as generous as the one it replaces, it eased fears of an imminent jump in layoffs.