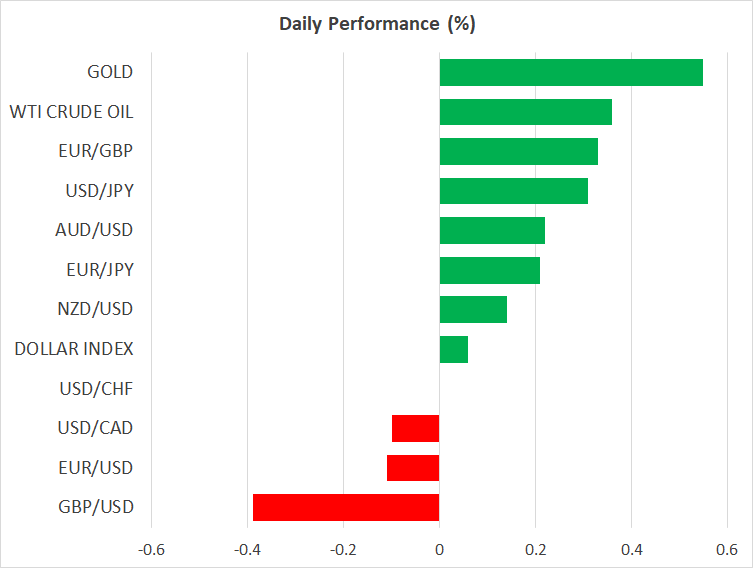 Optimism soars as stimulus talks back on

Markets had plenty to cheer about on Wednesday as reports of renewed efforts by US lawmakers to kickstart the stalled stimulus talks were followed by news that Pfizer-BioNTech’s vaccine has won its first regulatory approval.

US Treasury Secretary Steven Mnuchin and House Speaker Nancy Pelosi spoke for the first time since before the election on Tuesday in a bid to find agreement on a new coronavirus relief bill. However, there appeared to be no change to Republicans’ hard-line stance as Senate Majority Leader Mitch McConnell rejected a $908 billion stimulus plan proposed by a bipartisan group of House and Senate members.

But hopes are high that some kind of a deal could be reached by mid-December as McConnell remains open to the idea of combining new relief measures with a proposed $1.4 trillion spending bill that needs to be passed in order to avert a government shutdown.

Stocks buoyed, but is the good news already priced in?

Ten-year Treasury yields jumped to a near 3-week high and shares on Wall Street had another record session on the prospect of more fiscal stimulus by Congress. The S&P 500 and the Nasdaq Composite both ended the day at a fresh record high.

There was a further lift to risk assets from more positive vaccine news after the United Kingdom became the first country to approve the Pfizer-BioNTech Covid vaccine.

But as vaccine rollouts take a step closer to becoming reality, there are some signs of fatigue in the risk rally, indicating perhaps that much of the good news has already been priced in by the markets. Asian stocks retreated from their earlier highs in the session and European shares opened lower. Futures for the main US indices were also pointing to a negative open today.

The US dollar was attempting to regain some footing after extending its overnight slide at the start of Wednesday trading. The spike in Treasury yields provided no support to the greenback yesterday as sovereign bond yields rose across the board on the back of the growing optimism.

The brighter global growth outlook is likely to weigh further on the US currency in the coming weeks, especially if the Federal Reserve provides one additional dose of monetary stimulus at its meeting later this month. Fed chief Jerome Powell is due to testify on the second day of his CARES Act oversight hearing in Congress. But having revealed nothing yet on what new measures the Fed is considering, Powell is unlikely to surprise today either.

The lack of policy clues may aid the dollar recoup some losses as it moves off 31-month lows against a basket of currencies and while traders await the ADP employment data due later today ahead of Friday’s jobs report.

Euro and pound pull back as Brexit nears endgame

The greenback’s rebound knocked other majors from multi-year peaks. The Canadian dollar just brushed a two-year high, while the New Zealand dollar broke above $0.70 to reach its highest in 31 months. The aussie was also firmer but better-than-expected Q3 GDP figures were unable to lift it beyond Monday’s 3-month top as investors remained nervous about Australia’s rising trade frictions with China.

But it was European currencies that suffered the sharpest pullback from earlier session highs as negative Brexit headlines weighed on the pound, and to a lesser extent on the euro. Sterling slipped back below $1.34 following reports that there are still wide differences on the three sticking points of fisheries, level playing field and governance in the negotiations. Cable shot higher late yesterday amid signs the talks had entered the crucial final “tunnel” stage. But it appears that a no-deal outcome is not off the table just yet.

The euro, meanwhile, retreated slightly from 2½-year highs to around $1.2050 as investors tread with caution ahead of next week’s ECB policy meeting when policymakers may try to talk down the single currency now that the sensitive $1.20 level has been breached.