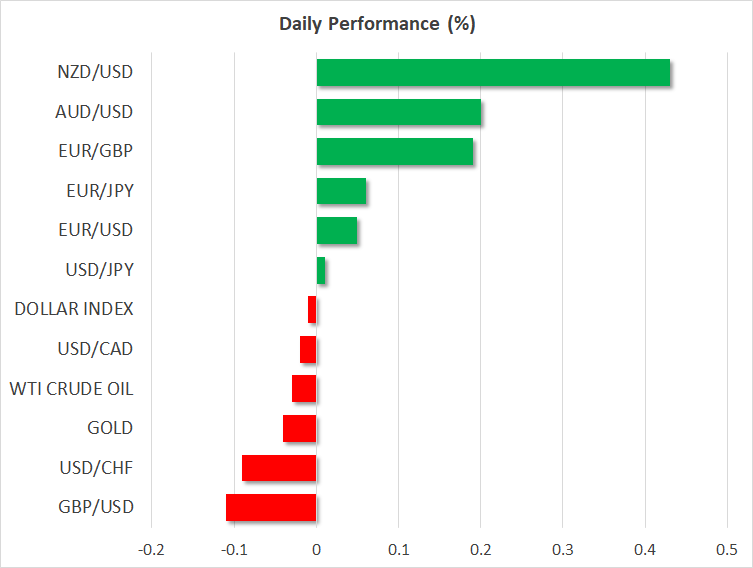 Global markets kicked off the week in a risk-on mood, with the major US stock indices set to open at new record highs and commodity currencies like the kiwi outperforming in the FX arena, following a batch of encouraging Chinese data. As expected, annual GDP growth slowed to 6.2% in Q2, the weakest pace in nearly three decades. However, the details were upbeat, with industrial production, retail sales, and fixed asset investment for June all overcoming expectations.

In a nutshell, growth may have slowed, but the stimulus measures seem to have been effective in containing the slowdown. Similarly, the trade war may have done less damage than feared so far, judging by the stellar industrial production print.

Looking ahead, risk sentiment will likely take its cue from how Fed rate-cut expectations evolve (more below), and from any signals out of the trade talks. On the latter, there have been zero signs of progress, with the recently announced US sale of weapons to Taiwan also amplifying the geopolitical dimension of this conflict. The road to any deal will therefore be particularly difficult – unless Trump softens his demands to score a ‘victory’ ahead of the US election race.

The US earnings season, which kicks off today with major names like Citigroup releasing their quarterly results, could also prove crucial in shaping risk appetite.

The greenback retreated on Friday and remains on the back foot early on Monday, without any noteworthy US developments to speak of. The move is likely an ‘aftershock’ following Fed chief Powell’s dovish remarks last week, when he clearly endorsed expectations for a July rate cut by focusing on the negatives and downplaying the positives in the economy.

Markets continue to price a ~20% probability for a ‘double’ rate cut of 50 basis points at the July 31 meeting, which seems rather extreme, as even some of the most dovish Fed officials have noted. If these aggressive expectations are priced out heading into the July 31 rate decision, the greenback may rebound somewhat. In this sense, some remarks by New York Fed president Williams today (12:30 GMT) could attract attention.

Overall though, the outlook for the dollar remains gloomy. The global central banks are entering an easing cycle, and the Fed has much more room to cut rates than anyone else. Hence, the potential downside in the dollar may be greater than the euro’s or the yen’s, as both the ECB and BoJ have much less scope to ease, given their already-negative rates.

On the data front, the next major release will be New Zealand’s CPI figures for Q2, due early on Tuesday. Forecasts point to a rebound in the nation’s inflation rate, but markets seem convinced that this won’t be enough to keep the RBNZ from slashing rates in August, attaching a ~72% probability for such action.

Hence, any surprise in these prints will likely be decisive in setting expectations for that event, and hence for the kiwi’s near term direction.