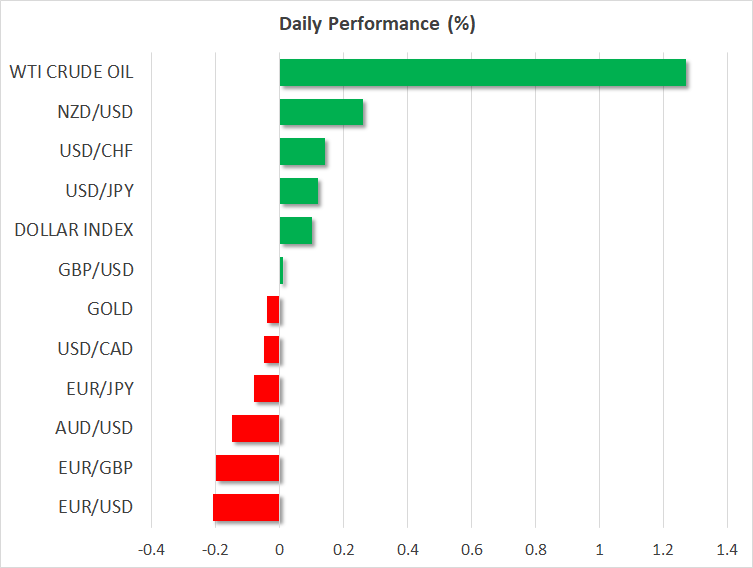 The US stock market rallied furiously on Monday, with the tech-heavy Nasdaq 100 gaining 3.1% to come within breathing distance of its recent record highs, propelled higher by the likes of Apple (+6.4%) and Amazon (+4.8%). Curiously though, the cheerful stock market mood did not spill over into other asset classes.

In the FX arena, havens such as the Japanese yen and Swiss franc shined bright, while risk-sensitive currencies like the Australian dollar surrendered ground. Crude oil fell substantially too, but that may be connected to some supply coming back online following production disruptions in the Gulf of Mexico, Norway, and Libya.

Overall, it seems the currency market is not quite as sanguine as the equity market about what lies ahead, and with the US bond market on holiday yesterday, there was no casting vote to clear things up. One explanation is that the enthusiasm in the stock market had unique catalysts behind it, such as the unveiling of the new iPhone, or perhaps this is another options-driven buying frenzy like the one in August.

When big players bet that a stock will rise through options, the dealers that sold those call options must hedge their exposure to avoid losses, and that is done by buying the underlying asset. This can create a positive feedback loop where buying forces more buying, especially in thin markets.

Things return to normal on Tuesday

The situation is back to normal today though, with different markets trading in tandem with each other again. Futures point to a slightly lower open on Wall Street after Johnson & Johnson paused its late-stage trials for a vaccine, and the sour mood is reflected in both bonds and FX, with long-dated US yields moving lower while the defensive dollar is a touch higher.

Elsewhere, the euro is having a bad day amid a storm of worrisome news. Infection numbers have gone through the roof across Europe, forcing many nations to entertain the idea of new targeted lockdowns or at least tighter restrictions. The recovery is already on wobbly legs according to the latest PMIs and if stricter measures are enacted, then all bets are off for economic growth in Q4.

We already got a taste of that today, when Germany’s ZEW survey for October disappointed, with the expectations index falling sharply. On top of that, the euro area’s core inflation rate hit a record low in September, implying that the European Central Bank (ECB) might be forced to raise its stimulus dose soon.

Hence, things are looking grim for the Eurozone, and if markets sense that the economy might even contract in the fourth quarter, the single currency could take heavy fire. That said, euro/yen may be a better proxy to capture any euro weakness than euro/dollar or euro/sterling, as both the dollar and pound have politics to worry about right now.

US inflation data and earnings season on the radar

As for today, the highlight on the economic calendar is the US CPI data for September. The core CPI rate is expected to have ticked up, which could reinforce the Fed’s reluctance to commit to any new stimulus for now.

In other news, China has suspended purchases of Australian coal, amid boiling tensions between the two nations.

Finally, the earnings season resumes in earnest with JPMorgan Chase, Citigroup, and Johnson & Johnson being among the biggest names to release their results today. The latter may draw special attention following the latest news. 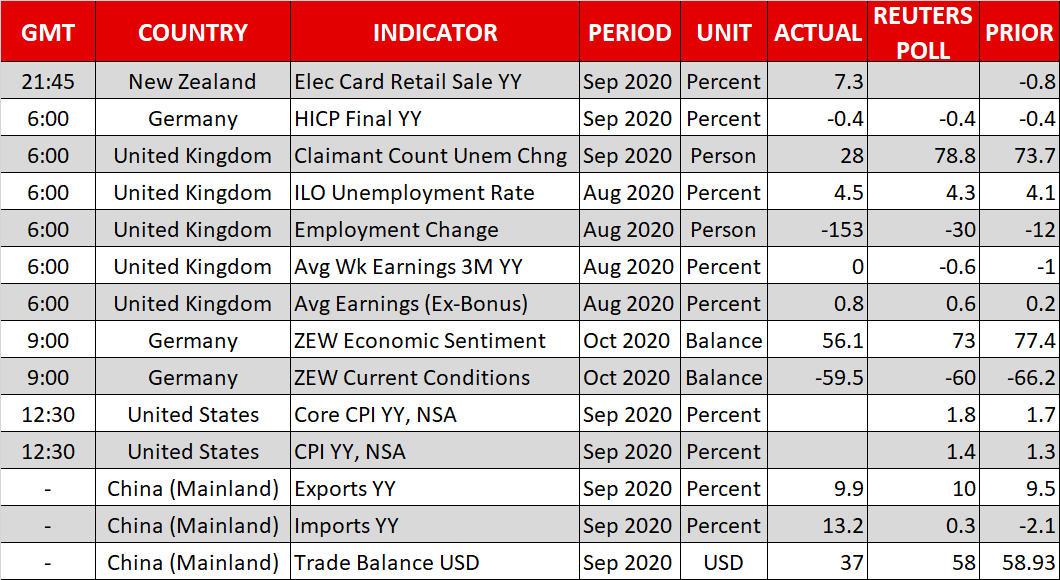