Posted on May 18, 2020 at 8:34 am GMTMarios Hadjikyriacos, XM Investment Research Desk 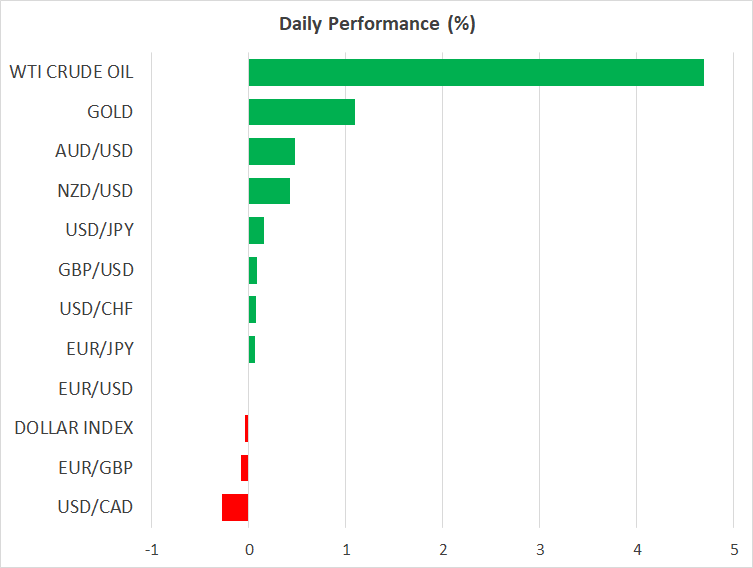 Global markets are in a good mood on Monday, with commodity currencies recovering and Wall Street set for a ~1.5% higher open, following a ‘whatever it takes’ moment from Fed Chairman Powell. In remarks published over the weekend, the Fed chief poured cold water on hopes for a V-shaped bounce, warning that for the economy to make a full comeback it may require a coronavirus vaccine so that people feel confident again.

Yet, investors took heart by some follow-up comments, where Powell reaffirmed the Fed is not out of ammunition, and that there’s “really no limit to what we can do” within the existing stimulus programs. He added that negative rates are among the last tools his Fed would utilize, hinting instead that QE purchases and lending facilities can be ramped up.

Hence, the Fed sees a slow recovery ahead, so it will keep the pedal to the metal; a signal strong enough not only to boost stocks but also propel gold to a new 7½-year high. Bullion – which pays no interest to hold – becomes more attractive the lower interest rates fall and the longer they stay low. Indeed, in a world where bonds barely provide any real return, government deficits are exploding and uncertainty about the future is sky high, the outlook for gold has never been brighter and another push towards record highs – or beyond – seems almost inevitable.

But are investors ignoring risks at their own peril?

Alas, let’s not forget the reasons central bankers are going ‘all in’. Powell himself pointed out the prospect of lasting damage to consumer psychology, and on top of that we have the risk that the US is re-opening its economy too quickly, as well as seething US-China tensions.

Most American states have partially re-opened already, but unfortunately the nationwide infection numbers remain alarmingly high. The concern is that opening up too soon could ignite second waves of infection and force the US into ‘rolling shutdowns’, derailing the economic recovery.

Meanwhile on Friday, US-China tensions escalated further after the White House moved to ban US chipmakers from supplying Huawei. Relations between the two nations were already icy cold before the pandemic, but things have escalated to a new level lately as Trump pins the blame for the outbreak on Beijing. It’s now clear that his electoral strategy is to launch a full political attack on China, so tensions will likely mount further ahead of November’s election.

The icing on the cake is that Senate Republicans seem to have very little appetite for any more fiscal stimulus. All told, bets for more Fed stimulus have calmed nerves for now, but the positive mood may be built on shaky foundations given all the risks, and a single headline could change things quickly.

Sterling suffers as Brexit talks on verge of collapse

In the UK, the pound has suffered lately amid concerns around the government’s handling of the health crisis and fears that the exploding fiscal deficit might result in ‘belt-tightening’ down the road, crippling demand as the recovery begins.

The latest leg lower in Cable though came after another round of Brexit negotiations concluded without progress, feeding speculation that the talks may fall apart as the UK doesn’t intend to request an extension to the transition period. That means a no-deal Brexit at year-end would become the default, and while this may be a negotiating ploy, it’s still difficult to have any confidence in the pound ahead of what promises to be a drama-packed summer.

The Bank of England’s chief economist suggesting over the weekend that he’s open to negative rates or even measures beyond that, reinforces this gloomy outlook.