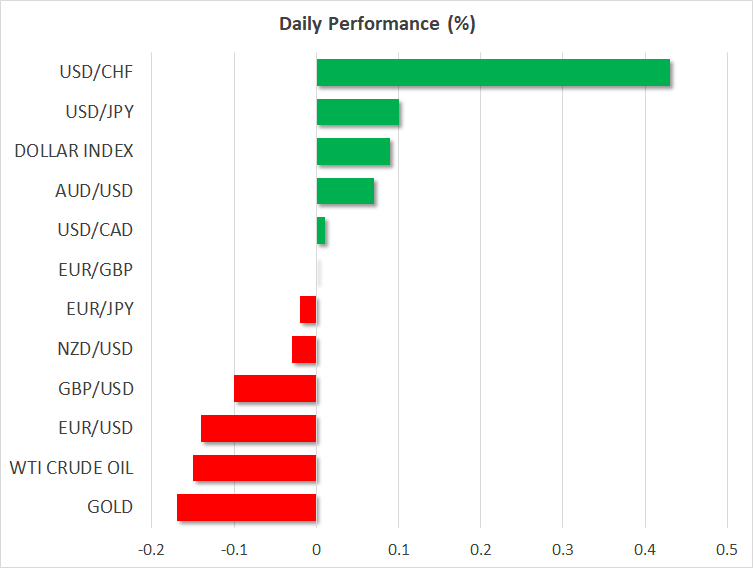 Wall Street recorded substantial losses on Wednesday, with the S&P 500 (-1.8%) falling sharply and Asian markets being a sea of red today, as traders continued to cut their risk exposure amid worries that a downturn is looming. Investors went back on recession watch this week after the ISM manufacturing survey showed the sector contracting at an accelerating speed, raising alarms that the far-bigger services sector may soon ‘catch this illness’ too.

Enhancing the bleak picture, were some headlines yesterday that the World Trade Organization ruled the US can impose tariffs on $7.5bn of European products, after Airbus was found to have received unfair subsidies. While this doesn’t really signify a major escalation in EU-US relations, as the WTO is the proper legal channel for settling disputes like this, the news still didn’t help the mood.

The defensive yen outperformed as investors rotated into safer assets, while the dollar was broadly weaker, weighed on by mounting expectations that the Fed will cut rates more aggressively to safeguard the economy. The implied probability for another cut in October now stands near 73%, from 60% yesterday. The loonie collapsed alongside oil prices, while the franc dropped after data showed Switzerland flirting with deflation again.

Today, all eyes will be on the ISM non-manufacturing PMI for September. A strong print could signal that investors overreacted to the weak manufacturing data and propel stocks and the dollar back higher, while a disappointing reading could send markets into full panic mode, amplifying the latest risk-off moves. Make no mistake, this may be even more important than the payrolls report tomorrow.

A theme that hasn’t attracted much attention lately, is the resurgent correlation between interest rates and stock markets. To explain – the narrative in recent quarters has been that ‘bad news is good news for stocks’, as any negative development was seen as increasing the odds for Fed rate cuts – and lower interest rates typically boost equities.

However, this pattern seems to have reversed this week as recession fears really deepened, with US interest rates falling in tandem with US stock markets. Hence, the situation seems to have deteriorated to the point where the promise of extra stimulus is no longer enough for investors to overlook the various risks, which could mark the start of a paradigm shift for market dynamics.

The British government officially sent its Brexit proposals to Brussels yesterday. These suggest that while there will be a customs border between Northern Ireland (UK) and the Republican of Ireland (EU), there would be no physical checks conducted at the border, but rather at ‘designated locations’ that could be miles away. On the bright side, EU chief Juncker didn’t immediately reject the plan, but he did add that there are “problematic points” which need to be addressed, especially on the backstop.

The pound yawned, trading practically flat as markets seemingly concluded that this plan is not a needle-mover for the Brexit process. Still, the ball is now in the EU’s court, and the next ‘big’ move in sterling will probably depend on whether the Commission concludes that this proposal is good enough to form a basis for new negotiations, or not.

Today, watch out for the UK services PMI for September. 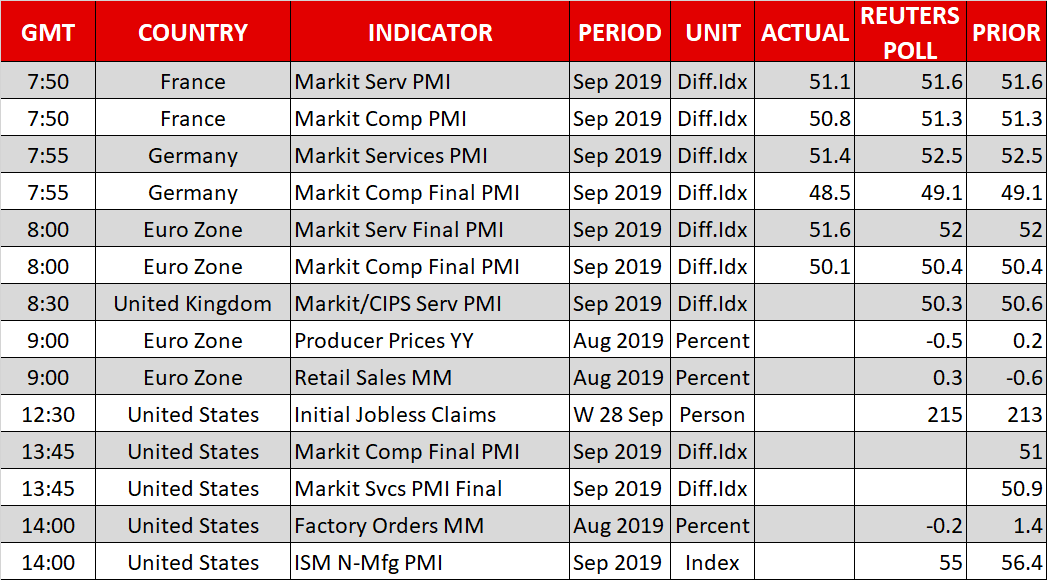