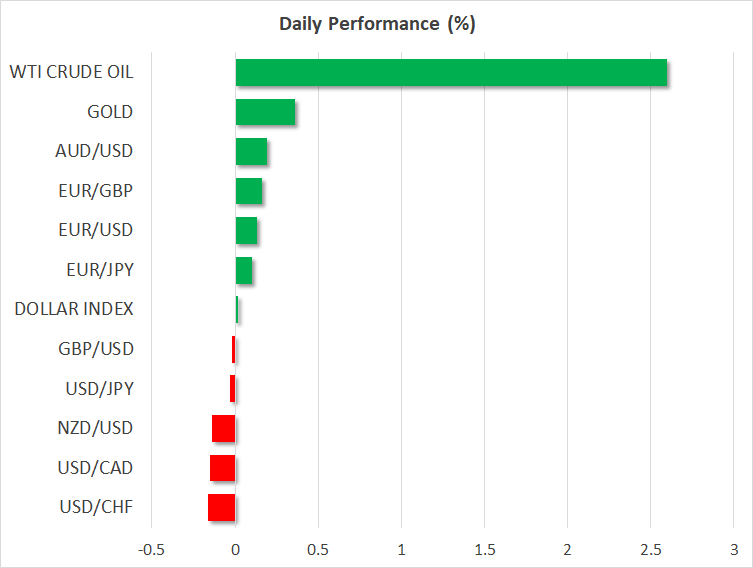 Risk appetite is looking increasingly on borrowed time as stocks turn sideways, having lost momentum after last week’s sell-off. Global shares on Friday could only manage a tepid rebound from yesterday’s dip while gold headed higher amid ongoing worries about the surge in new virus cases in the United States. The number of new daily coronavirus cases reached record levels in ten US states this week, putting into jeopardy the reopening of the economy.

Fresh doubts about the economic recovery were also raised from stubbornly high weekly jobless claims yesterday. Although the number of Americans claiming unemployment benefits each week continues to decline, the rate is slowing, suggesting that the initial impact from the lockdown easings is waning and that the road to recovery may be a long one.

There was better news elsewhere, however, as China said the outbreak in Beijing has been contained and virus restrictions were lifted further in Tokyo.

The mixed news flow kept today’s gains in equity markets in check, with S&P 500 e-mini futures indicating a 0.5% rise at the open today. The relative calm may not necessarily hold for the rest of the day, however, as large option expiries could jolt markets later in the US session.

Optimism not dead yet

On balance, despite the latest setbacks in the medical and economic data, the prevalent mood is still one of optimism as investors remain hopeful that a vaccine will be found before the end of the year, enabling economies to fully recover from the pandemic.

However, even if those expectations were to materialize, there are plenty of other risks that markets have been ignoring lately, the main one being the recent souring of Sino-US relations. Talks held this week between US and Chinese officials in Hawaii do not appear to have been particularly fruitful, prompting President Trump to tweet that a “complete decoupling from China” is a policy option for the US.

Trump’s threat could be one factor buoying the safe-haven gold today. The precious metal was last trading up 0.5%, though it remains flat on the week.

The US dollar and yen, on the other hand, have had a clearer trend, moving steadily higher since Tuesday as the rebound in stocks fizzled out. Nevertheless, most major indices are on track to end the week with gains.

The weakening risk-on tone has been a major drag on the euro and pound, as well as the commodity-linked dollars. The euro hovered around the $1.12 level as it’s looking unlikely that a deal on an EU fiscal package will be reached before July at the earliest. The Australian dollar has also been skewed to the downside for much of the week, though it did perk up from robust preliminary retail sales estimates for May released earlier today.

But one of the surprise big movers over the last day has been the pound, which slid sharply after the Bank of England struck a somewhat hawkish tone at its policy meeting on Thursday. As expected, the Bank added £100 billion to its bond purchases but investors were puzzled by the dissenting vote by the chief economist, Andy Haldane. A bigger concern, however, was the indication in the policy statement that the extra £100 billion is intended to last until the end of the year, dashing expectations of more stimulus at the next meeting in August.

Markets clearly think the UK economy will need further support and this may explain why sterling crashed toward the $1.24 level yesterday. Even a much better-than-expected set of retail sales numbers out of the UK today could only stabilize the pound at best, suggesting Brexit fears could also have a hand to play in the latest sell-off.