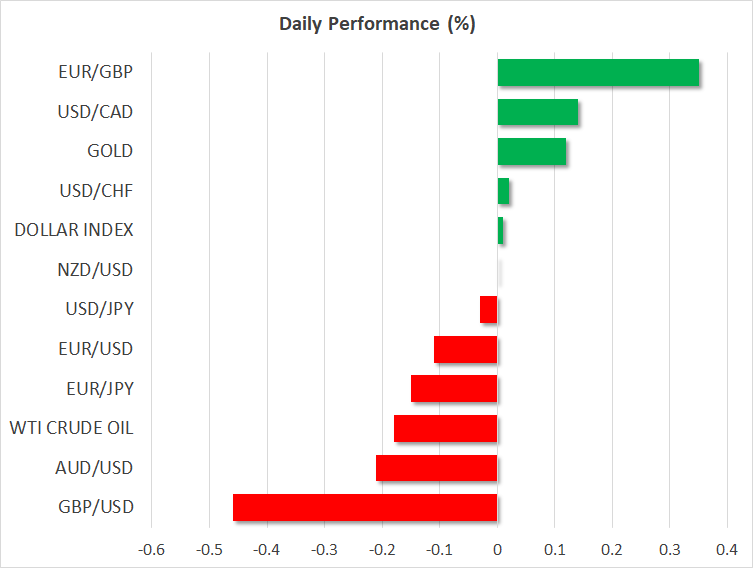 A new round of tariffs came into effect in the United States and China on Monday as the two countries imposed additional levies on each other’s goods in the never-ending trade war. While there were few hopes that US President Trump would cancel the tariffs in a last-minute change of heart, investors were nevertheless steering clear of risk assets on the first trading day of the month amid worries that the latest hike in duties would be more damaging than previous ones.

The 15% tariffs being imposed by the US will be paid for mostly by American consumers as it applies to a wider variety of consumer goods such as footwear and electronic products. In retaliation, China has slapped tariffs on US products including US crude imports.

Asian stocks struggled as another weekend of violent protests in Hong Kong further added to the gloomy outlook for the region. However, Chinese shares bucked the trend, closing 1.3% higher, after China’s State Council said it plans to ramp up spending in infrastructure projects and regional development to support the economy.

Europe had a mixed start to the day, but US equity futures remained in the red. Gold was marginally higher, easing from an earlier advance to $1533.52/ounce. Wall Street will be closed on Monday for Labor Day so volumes are expected to be thin for the rest of the day.

Manufacturing PMIs out of Asia did little to calm fears of a deepening slowdown, although there was some optimism in China as the Caixin/Markit PMI contradicted the official gauge to record a surprise expansion in August. The news that more fiscal stimulus could also be on the way further helped limit the risk aversion in the markets on Monday.

Meanwhile, the planned trade talks between the US and China later this month, which Trump again confirmed on Sunday will go ahead, kept alive hopes of some de-escalation in tensions.

However, some signs that the slump in manufacturing output in the Eurozone is bottoming out failed to lift the euro. French and Italian manufacturing PMIs were revised modestly higher in the final readings for August released today, though Germany’s was revised slightly down.

The euro broke below the $1.10 level on Friday, hitting a two-year low of $1.0961 following weak inflation numbers for August, which reinforced expectations that the European Central Bank will announce a big stimulus package when it meets next week. Expectations are running so high that relatively hawkish remarks from some ECB policymakers in recent days have been unable to dissuade investors that substantial policy easing is on the way.

The fresh bout of weakness in the single currency pushed the dollar index to a two-year high, which briefly rose above the 99.0 level on Friday. The dollar was slightly weaker against the safe-haven yen, however, at 106.26.

The focus for the greenback this week will be the ISM PMIs on Tuesday and Thursday, as well as the all-important nonfarm payrolls on Friday.

Pound under pressure as all-out war breaks out in Parliament

British Prime Minister Boris Johnson threatened to expel Conservative MPs who vote against the government in any legislation aimed at stopping a no-deal Brexit on October 31. Labour leader, Jeremy Corbyn, has vowed to do “everything necessary” to avert a chaotic exit from the European Union and lawmakers are expected to hold an emergency debate in Parliament on Tuesday to discuss their options.

However, it’s unclear whether any legislation for blocking a no-deal Brexit would attract a majority and even if there were enough Tory MPs that defied their own party to support such a bill, this would risk triggering a general election as the government would lose its majority if Johnson went ahead with his threat and sacked the rebel MPs.

The political uncertainty proved too much for the pound, which was once again testing the $1.21 level on Monday. 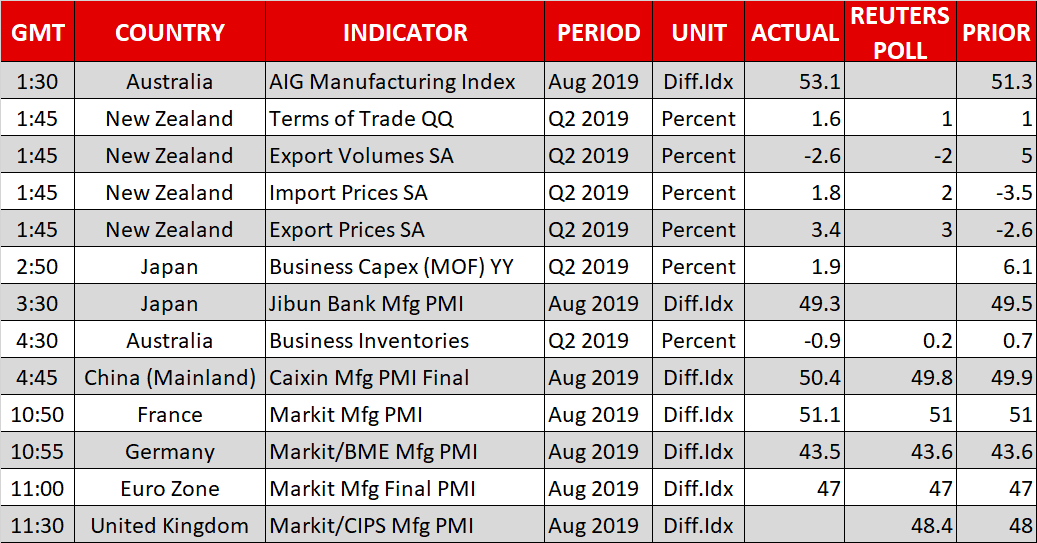