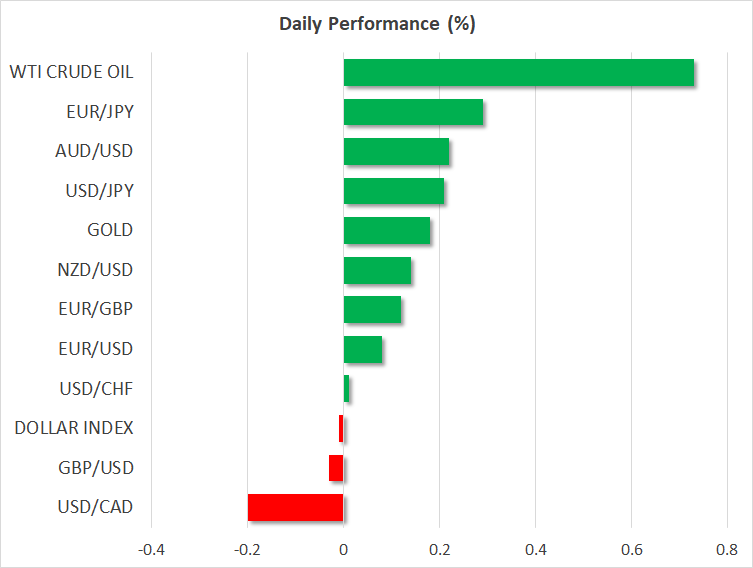 Risk appetite recovered somewhat on Wednesday following the knock from Apple’s profit warning yesterday, which elevated concerns about the impact from the coronavirus outbreak. The number of new confirmed cases of coronavirus in China fell for a second day on Tuesday, with the tally slowing to 1,749, though there was a spike in the number of deaths.

Stocks in Asia headed higher on hopes that the outbreak is easing, while expectations that policymakers globally will provide enough stimulus to counter the hit to their economies from the epidemic further encouraged risk taking. Chinese equities were the exception, however, as shares slid despite reports that the government is considering measures to bailout the country’s stricken airlines that have been one of the worst affected industries from the travel restrictions and lockdowns imposed on entire regions.

But the sell-off is just as likely to be down to profit taking as it is to investor caution after the impressive rebound from the initial slump from the virus fallout. US and European equity futures were also in positive territory, signalling a broad pick up in risk appetite.

The improved mood wasn’t enough, however, to stop gold’s ascent, which extended yesterday’s strong gains to climb to 6-week highs today, breaking above the $1,600 an ounce level. Although scepticism that the virus impact will be short-lived has been contributing to the yellow metal’s latest upswing, geopolitical risks were the main culprit for the surge in gold prices on Tuesday.

WTI oil was last trading 0.9% higher, while Brent crude was heading for its seventh straight day of gains.

Dollar holds near highs ahead of FOMC minutes

In FX markets, the safe-haven yen was pressured by the risk-on tone, falling sharply against the risk-sensitive antipodean currencies, as well as the US dollar, which rose to a 4-week high of 110.21 yen. However, against a basket of currencies, the greenback was marginally weaker as the euro firmed slightly, having earlier scaled a fresh 4½-month high.

The euro took another tumble yesterday as Germany, the Eurozone’s economic powerhouse, continued to produce negative headlines. Germany’s ZEW economic sentiment index – a closely watched barometer of investor morale – plunged in February as businesses were hit by worries about the impact from the coronavirus, which has only added to the Eurozone’s many woes.

With no turnaround in sight to the bleak outlook, the single currency skidded to 34-month lows, slipping below the $1.08 level.

Amidst all the gloom, the dollar continues to stand tall among its peers as the American economy is still a safer bet for investors even as Treasury yields flash warning signs of a possible recession. The spread between 3-month and 10-year Treasury yields has been slipping in and out of the negative zone during February, indicating market stress.

Traders will be hoping to get some insight into how worried Fed policymakers were at the last meeting at the end of January about the virus when the central bank publishes its minutes at 19:00 GMT. Although, given the number of Fed speakers lined up to speak today, their updated views are likely to attract more attention.

Canadian inflation numbers will also come into focus later today as the loonie see-saws on virus and oil headlines.