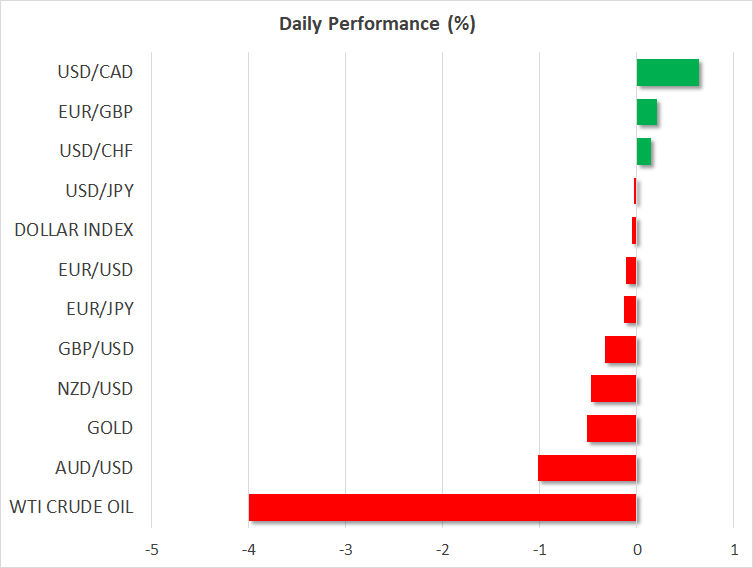 End of the risk rally?

The unstoppable risk rally that’s pushed global stocks close to erasing their virus-led losses is in danger of faltering as fears of a second wave of infections intensify. Several states in America have seen a large increase in the number of daily virus cases over the past week, with a surge in hospitalizations, while some cities like Beijing and Tokyo have reported a spike in new cases in recent days.

Much of the rebound in risk assets has been built on the expectations that the flood of fiscal and monetary stimulus around the world will facilitate a V-shaped economic recovery. But while there is no threat to the stimulus taps being turned off – if anything, financial assistance is on the rise with even fiscally prudent nations like Germany abandoning their fiscal discipline – there’s a growing risk that authorities may press the pause button on the lockdown easings.

Beijing has already placed areas at the heart of the latest outbreak under lockdown, and although it doesn’t look very likely that US states are willing to do the same, at the very least, the rising concerns of a second wave will prevent social distancing rules from being completely abandoned anytime soon, hindering prospects of a full recovery.

The souring of risk sentiment weighed heavily on the Nikkei 225 (-3.5%) and European shares opened about 2.5% lower on Monday. Wall Street also looks set to undo Friday’s gains as futures were pointing to a 3% drop for the Dow Jones.

The Australian dollar was the biggest casualty of today’s risk-off moves, plunging by about 1%, as investors finally began to question the likelihood of a strong recovery out of the virus crisis. Still, in the bigger picture, the latest pullback for the aussie – widely considered as a proxy for risk trades – appears to be nothing more than a long overdue correction and it may be too soon to predict an end to its 2½-month rally.

The other commodity dollars – the kiwi and the loonie – were also down against their US counterpart, with commodities like oil and copper taking a battering since Thursday. But the safe-havens yen and Swiss franc still managed to outperform the mighty US dollar, which stood flat against a basket of currencies on Monday.

Ongoing protests over racial inequality and second wave worries may be holding the dollar back, especially versus currencies like the euro, which has seen a shift in sentiment after the EU put forward a large stimulus plan. EU leaders will decide on that plan later this week, so the euro is not out of the woods just yet amid resistance among some member states for a generous fiscal package.

Gold, meanwhile, was last trading 0.6% lower, holding within its recent range, even as the greenback appeared to lose some steam, which perhaps is an indication that this risk-off episode may be nothing more than temporary market jitters.

The pound briefly dipped below the $1.25 level on Monday before regaining some ground as worries about a no-deal Brexit continue to haunt the currency. Britain formally ruled out requesting an extension to the transition period on Friday, which means UK and EU negotiators have just six months to reach a post-Brexit trade deal. Prime Minister Boris Johnson reportedly wants a deal to be done by autumn at the latest and is due to hold a video conference with top EU officials at 12:30 GMT to break the deadlock in the talks.

If no progress is made, the pound is poised to tumble again as on top of the virus crisis, exiting the EU’s single market without any trading arrangements could be cataclysmic for the UK economy. Ironically, the distraction caused by the pandemic may have increased the risk of a no-deal Brexit just when a smooth exit couldn’t be more paramount for either side.