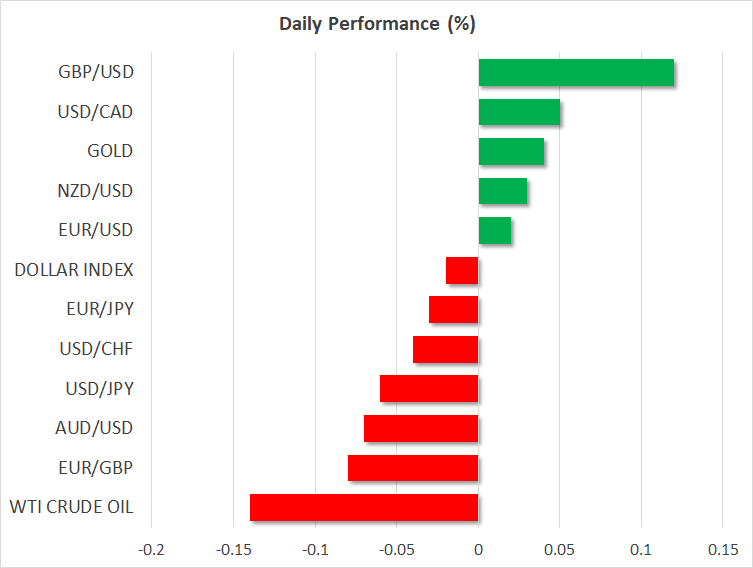 Markets maintained a cautious mood on Thursday as conflicting reports about where the US-China trade negotiations are headed kept many investors on the sidelines. Reports suggest the United States and China are struggling to agree on what tariffs to roll back and whether these should be proportionate.

The US reportedly isn’t willing to remove as many tariffs as they’re demanding from China and all the indications are that the White House isn’t happy about the amount of concessions they’re getting from the Chinese. President Trump appeared to reinforce this view, telling reporters on Wednesday, “I don’t think they’re stepping up to the level that I want”.

His comments have cast doubt about the likelihood of an interim deal being completed this year and the row over human rights in Hong Kong risks further undermining the ongoing negotiations. The US House of Representatives yesterday passed the two bills that had been earlier approved by the Senate and which are aimed at supporting the protestors in Hong Kong.

However, despite China’s strong criticism of the legislation, there are signs the Chinese government is trying to keep the Hong Kong issue separate from the trade talks. The country’s Vice Premier Liu He was yesterday quoted as saying he was “cautiously optimistic” that a ‘phase one’ deal will get done. China’s Commerce Ministry also attempted to play down any disagreements in a press briefing today, saying the rumours were “not accurate”.

The mild optimism kept the sell-off in equity markets contained but overall, sentiment was dented by the reduced prospect of an imminent partial trade deal, which would have helped lift some of the uncertainty that has dogged financial markets for the past one and a half years.

The leading share indices on Wall Street fell by between 0.35% and 0.5% on Wednesday, with shares in Asia also closing in the red today and European stocks opening sharply lower.

However, moves in currency markets were more muted, with the yen giving up some of its gains after the comments by China’s Commerce Ministry spokesman. The US dollar was marginally lower at 108.50 yen, while the euro edged higher against both the dollar and yen.

Gold meanwhile extended its gains, climbing to $1472 an ounce, as Treasury yields slipped amid the increased uncertainty about the state of the trade negotiations.

Another notable mover over the past 24 hours is oil. WTI and Brent crude oil soared by 3.3% and 2.4% respectively on Wednesday after the weekly inventories numbers out of the US showed crude stocks rose by less than expected. Both WTI and Brent were softer today as trade worries weighed on the commodity.

Prices got a further boost after Russia signalled it will continue to cooperate with OPEC to restrict output. OPEC and its allies will meet in Vienna on December 5-6 and expectations are that the alliance will agree to extend the current output cap beyond March 2020. However, without a significant improvement in the global economic outlook, the OPEC cuts will continue to have a limited impact in lifting prices.