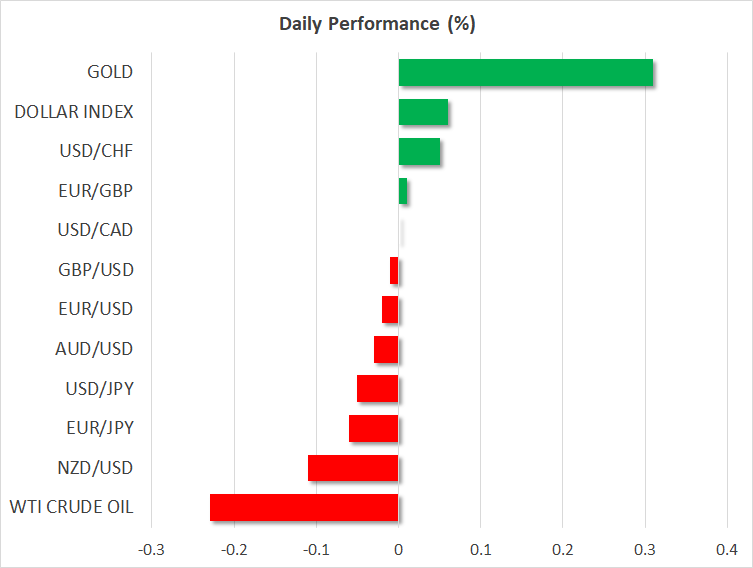 Stock markets have been among the main beneficiaries after the Fed laid the groundwork for near-term rate cuts, with the benchmark S&P 500 (+0.95%) index closing at a fresh record high yesterday. Falling interest rates typically boost risky assets like equities as investors can borrow at even cheaper rates to buy them, and companies see their cost of borrowing drop, aiding their profitability.

To be sure, optimism that the American and Chinese presidents can reach an agreement to restart sincere trade negotiations when they meet next week is likely adding fuel to this ‘risk’ rally. What’s most striking, is that risky assets are rallying alongside safe havens, with gold soaring to fresh 6-year highs earlier today to touch $1410 per troy ounce before retreating, and the Swiss franc being by far the best performer in the FX market yesterday.

The fact that ‘all boats are rising’ signals that while investors are happy to pile back into equities in anticipation of cheaper money, they are also increasing their defensive exposure – so looser monetary policy alone doesn’t seem enough to calm nerves. Perhaps that can change next week if Trump and Xi can agree to a trade ‘ceasefire’, implying that the path of least resistance for equities currently seems higher.

Preliminary French and German PMIs for June have just been released, and were broadly stronger than expected. While this uptick isn’t enough to suggest the ECB won’t roll out more stimulus, it’s enough to cast some doubt on that prospect, which is a positive for the euro. Particularly considering that the Fed has essentially ‘locked’ itself in for a July cut, implying that the near-term risks surrounding euro/dollar may be tilted to the upside.

The Bank of England (BoE) appeared a touch more cautious yesterday, as despite maintaining the view that interest rates still need to rise a little, policymakers also noted that the ‘perceived’ probability of a no-deal Brexit has risen. The pound ticked down, but quickly recovered.

More importantly, the Tory leadership race has reached the final two – Boris Johnson and Jeremy Hunt. Now, this contest will be decided by the 160,000 Conservative Party members, who have until late July to make their pick. Hunt, who voted Remain back in 2016, may be the more sterling-positive option, but he is also a massive ‘underdog’. In any case, in an environment of a falling US dollar, the outlook for the pound suddenly seems neutral, from negative earlier.

‘Black gold’ had a good run yesterday, with WTI crude gaining more than 5% as the demand outlook improved while the supply picture darkened. Speculation for more trade negotiations is easing concerns around global growth, while news that Iran shot down a US drone added to the body of evidence that tensions are near a boiling point. In fact, reports today suggest Trump ordered a military strike on Iran after the drone’s downing, but called it off a few hours later.

Hence, the outlook for oil is improving, albeit perhaps for the ‘wrong’ reasons. Let’s not forget that there’s still an OPEC meeting on July 1, and expectations for an extension of the current production cuts could also help keep a bid under the precious liquid. 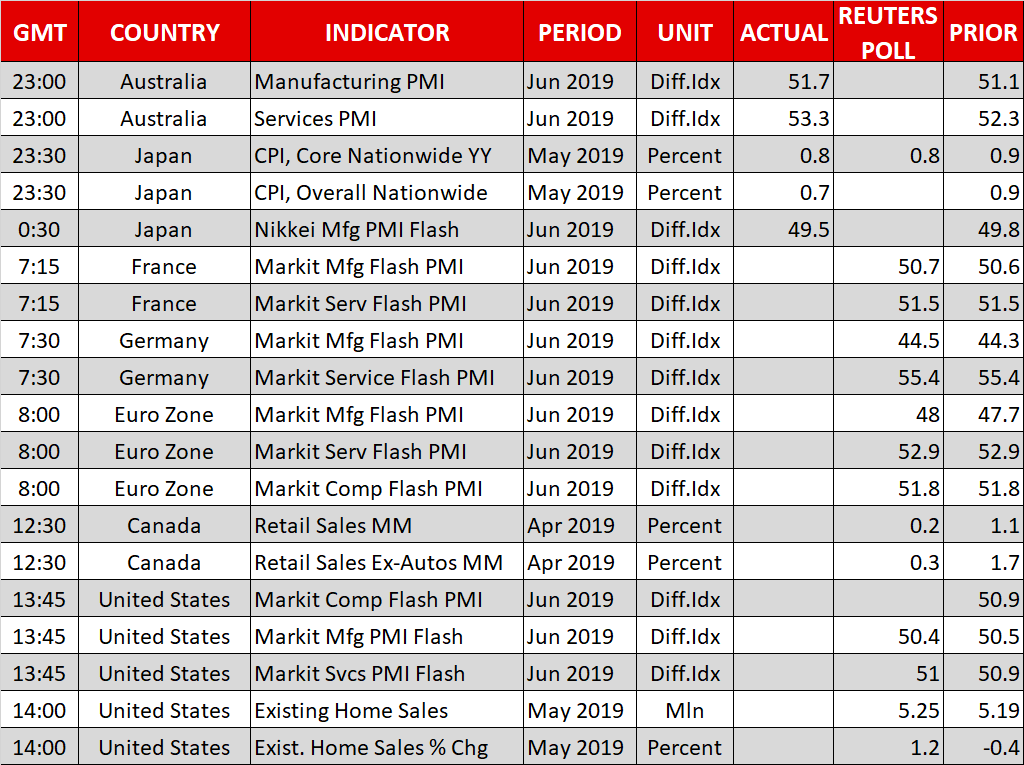