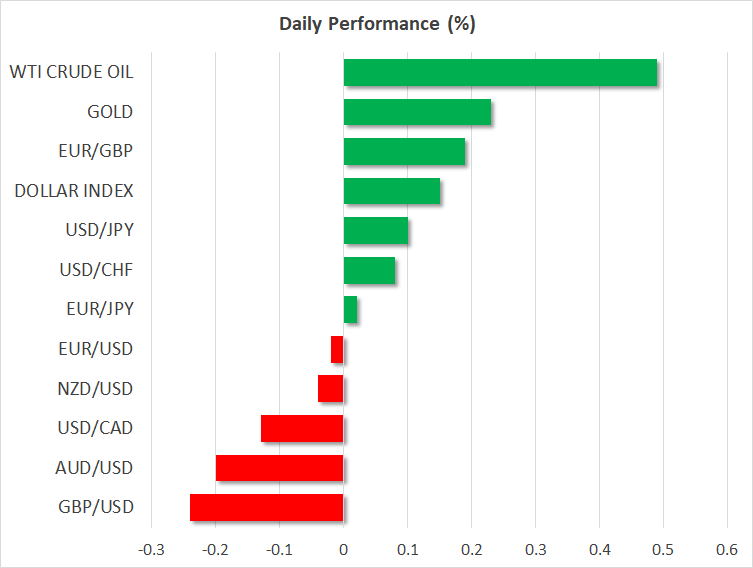 The new year got off to a subdued start with equity markets extending their incredible rally of 2019 and little new developments to rattle currency markets. But with Japanese markets remaining closed for the rest of the week, trading volumes picked up only marginally.

Chinese stocks were the biggest winners in Asian trading as news on Wednesday that the People’s Bank of China has cut the Reserve Requirement Ratio by 50 basis points boosted sentiment. The blue-chip CSI 300 Index closed up 1.4% to hit the highest in nearly two years, while equity futures for Europe and the US were also pointing to solid gains. The CSI 300 index outperformed the S&P 500 in 2019, rallying by about 35%, as trade tensions with the United States eased.

The bullish momentum for Chinese equities looks set to continue in 2020 as the PBOC is expected to loosen monetary policy further in the coming months to stimulate a slowing economy, which aside from the trade war with the US, is facing other challenges.

Further underpinning the positive sentiment was President Trump’s announcement on Tuesday that the ‘phase one’ trade deal will be signed at the White House on January 15. Although the ‘phase one’ deal won’t completely resolve the Sino-US trade dispute and the bulk of tariffs imposed on Chinese goods will stay in place, there are increasing signs that the two sides are ready to take the discussions to the next level, with President Trump tweeting “At a later date I will be going to Beijing where talks will begin on Phase Two!”.

It was a somewhat different story in currency markets, however, where the late 2019 euphoria took a breather and most major pairs consolidated their end of year gains. The British pound and Australian dollar were some of the biggest losers, retreating by about 0.2% versus their US counterpart.

The pound surged back above the $1.32 level on Tuesday as a weaker US dollar and comments from the EU’s trade commissioner that Boris Johnson will have no choice but to extend the transition period helped the currency retrace the sharp losses from earlier in December.

The euro was flat on Thursday, though it remained well supported above the $1.12 level after the Eurozone’s manufacturing PMIs for December were revised higher in today’s final reading. IHS Markit’s final print for the US is the main data release for the remainder of the day before attention turns to the ISM manufacturing PMI on Friday.

The profit taking in other pairs helped the greenback crawl higher on Thursday, with the dollar index climbing by 0.2%. The dollar slipped by more than 1% in the final days of 2019 as rising optimism about the outlook for the global economy in 2020 fuelled the risk rally.

However, the gains in risky assets were not matched by a similar sell-off in safe havens as, apart from the bullish gold, the yen and the Swiss franc fell only marginally. As for gold, the yellow metal remained undeterred by the improving picture for the global economy and continued to benefit from seasonal demand, driving the price back up to $1520 today, just shy of Tuesday’s 3-month peak of $1,525.20.

Also helping gold in recent days are geopolitical tensions in the Middle East with Iran and in North Korea where Kim Jong Un threatened to resume nuclear weapons testing. Other regions of concern as 2020 gets underway are the ongoing protests in Hong Kong and the never-ending Brexit drama in the UK, all of which have the potential to erupt into a major crisis, even as things start to look up on the trade front.