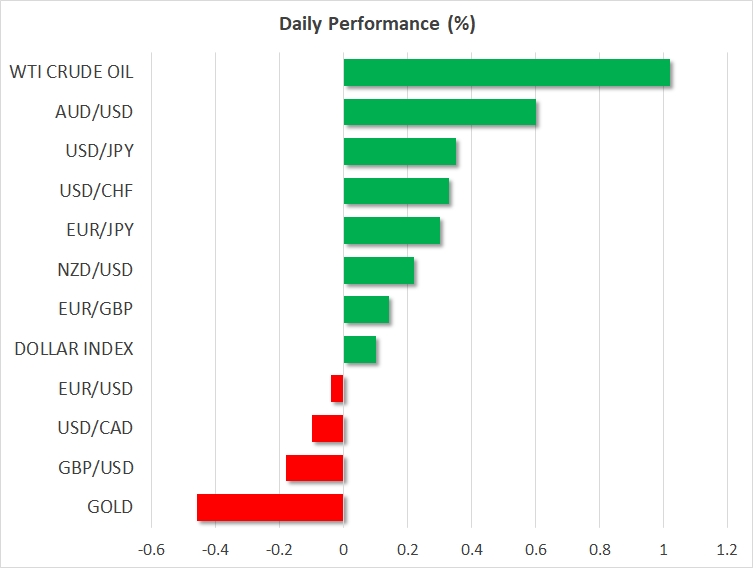 Stocks in Asia took a breather from yesterday’s steep sell-off as Chinese authorities stepped in to limit the fallout from the worsening outbreak of the coronavirus, as the death toll continues to rise. A massive injection of liquidity by China’s central bank yesterday as well as verbal instructions by regulators to Chinese brokerages not to sell shares eased the panic selling that saw China’s benchmark indices lose about 8% of their value on Monday.

However, both the blue-chip CSI 300 index and the SSE Composite index managed to reverse earlier losses to close sharply higher today, with other Asian indices following suit and Europe also getting a lift at the open. US equity futures suggest the positive mood will continue in North American trading, though disappointing earnings may pose a bigger risk to Wall Street in the immediate term than the virus pandemic.

Google parent, Alphabet, reported revenue below estimates on Monday, with the company’s shares tumbling almost 5% in extended trade. It follows disappointing earnings by Facebook last week, putting a dent in the Nasdaq’s incredible rally and casting some doubt about the sustainability of Wall Street’s meteoric surge of the past few months.

Further supporting the improved sentiment in the markets was better-than-expected ISM manufacturing PMI out of the United States yesterday. The closely watched manufacturing gauge showed activity expanded for the first time in six months in January, signalling a possible end to the slump brought on by the long-running trade dispute with China.

The surprise uptick in the PMI helped US Treasury yields edge higher, which have fallen to uncomfortable levels following the flight to safety from the virus outbreak. This in turn boosted the greenback, with the dollar index moving away from more than two-week lows. Against the safe-haven yen, the US currency gained 0.3% to climb back above the 109 level.

European PMIs also provided a glimmer of hope that the global manufacturing malaise may be over as IHS Markit’s final prints for January were revised higher across the Eurozone and the United Kingdom. However, hard Brexit angst took the shine off European currencies, with the euro backing away from the $1.11 level and the pound plunging below the $1.30 handle.

British Prime Minister Boris Johnson appeared to rebuff an EU offer of a “highly ambitious” trade deal, with Johnson making it clear that the UK will not follow EU rules once the transition period ends, leading investors to fear that Britain will sign up to only a ‘bare bones’ deal with its European partners.

Elsewhere, the Australian dollar was enjoying one of its better days this year as the currency got a boost from the Reserve Bank of Australia’s decision to leave interest rates as well as its growth forecasts unchanged at its policy meeting today. Concerns about the impact of the coronavirus on Chinese and global growth had pulled the aussie towards 10-year lows with the outlook for the domestic economy already darkened due to the devastating bushfires. However, the RBA’s unexplained optimism has given the aussie a bit of a short-term reprieve from the all the recent gloom.

The New Zealand dollar, meanwhile, was flat ahead of quarterly employment numbers due later today.