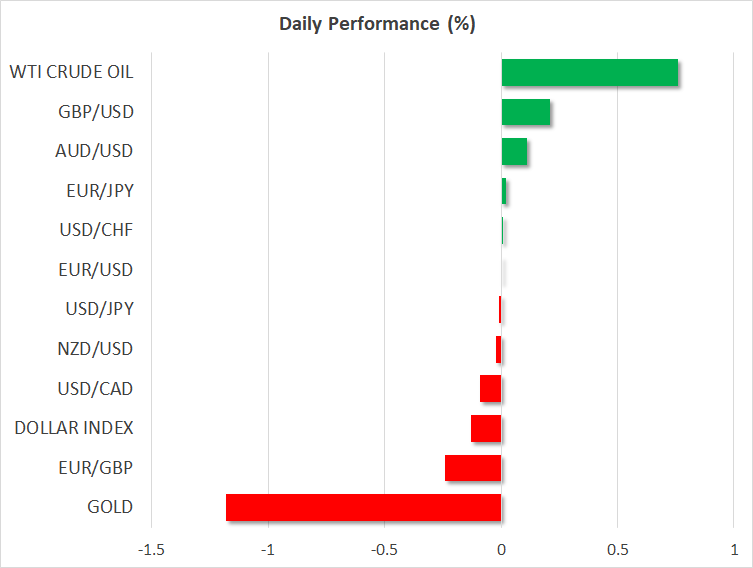 Global stock markets stabilized on Tuesday after yesterday having their worst day since Britain voted to leave the European Union in June 2016. A report in China’s Global Times that a university professor has developed an oral vaccine for the coronavirus supported the calmer environment in financial markets today. A significant easing in the number of new cases in China outside of Hubei province also provided some cause for optimism, though the rapid spread in other countries such as Italy and South Korea kept many investors on edge.

Although the selloff may have lost momentum, it’s too early to predict an end to the latest bout of risk aversion and some Asian stock indices were still in the red today. Shares in South Korea and Singapore attempted a rebound but they fell in Australia, China and Japan, with Japanese stocks catching up to Monday’s moves as traders returned from a public holiday.

In a somewhat more encouraging sign that the selloff may be done for now, US equity futures turned higher, with Nasdaq futures pointing to gains of about 1%. The tech-heavy index sank by 3.7% overnight, driven by a slump in tech stocks such as Apple, which are most exposed to China. Given the scale and length of the lockdown in many parts of China, investors may still be underestimating the potential hit to corporate earnings from the virus outbreak.

The Dow Jones, meanwhile, was dragged lower by heavy losses in health insurer stocks following Bernie Sanders’ win at the Nevada caucuses on Saturday, who is now the frontrunner to win the Democratic nomination to challenge President Trump at the November elections. One of Sanders’ main campaign policies is to eliminate private health insurance in favour of a universal ‘Medicate for All’.

The US dollar was struggling to regain its positive footing following Fridays’ large drop as weak PMIs have boosted expectations that the Federal Reserve will be forced to cut interest rates soon, while a resurgent yen also undermined the dollar’s dominance.

The dollar index, which measures the greenback against a basket of six of its rivals, drifted further away from last week’s near three-year highs, while the firmer yen pushed the US currency below the 111-yen level.

But the yen’s advances against other currencies was more restrained, suggesting investors remain worried about the economic fallout from the virus on Japan’s economy and that the fall in dollar/yen is more likely led by the steep decline in Treasury yields.

The yield on 10-year Treasury notes fell to 1.37%, approaching its all-time low of 1.321% set in July 2016 as markets bet that the Fed will have to ease policy again to counter the negative impact from the virus epidemic, which is on the verge of turning into a pandemic. Although investors are in no doubt that the US economy is in far better shape to weather the virus storm than other countries, the Fed has more room to cut rates than its global counterparts – that can only mean more downside for the dollar relative to other majors.

The dollar’s pullback provided some relief to currencies that have been heavily battered by virus fears in recent weeks, with many emerging market currencies firming versus the greenback. The slight easing in the risk-off mood also helped the Australian and New Zealand dollars to stabilize but they remained far from signalling that their slide is bottoming out and slipped back into the red by the European session.

The euro fared slightly better, however, finding support from yesterday’s better-than-expected Ifo business climate survey out of Germany. The single currency inched up to $1.0860 and the pound was also stronger, climbing to $1.2972.

In commodities, gold dipped to around $1,653 an ounce, though given the situation with the coronavirus, this is more likely to be a short-term correction than an end to its impressive rally.