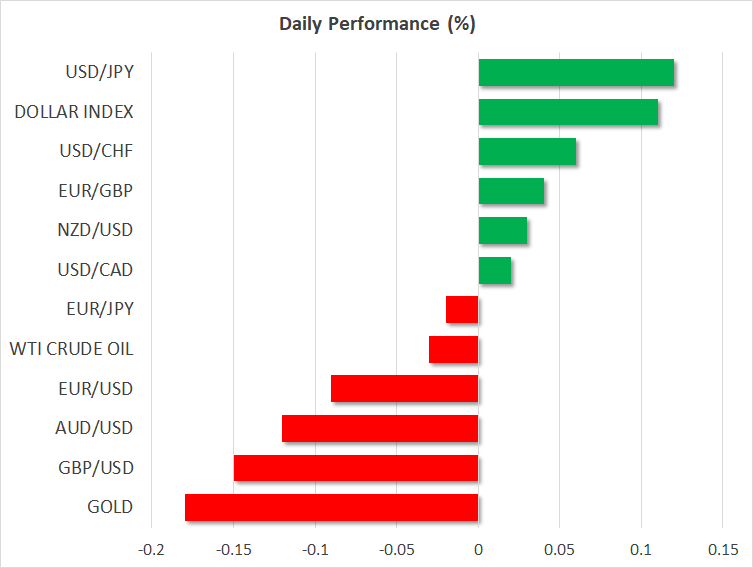 The hype train that has pushed Wall Street to new records time and time again just keeps on rolling, with all three of the major US stock indices ascending to new record highs yesterday following some rosy comments from President Trump. He said the phase one trade negotiations with China are in the “final throes”, hinting that a preliminary deal may be inked soon. That calmed the nerves of investors, who were worried he might launch another salvo of tariffs on December 15 if no accord is reached by then.

Outside of stocks though, there wasn’t much reaction. Sure, commodity currencies such as the loonie and the kiwi logged some gains, while the defensive yen remained on the retreat, but all these moves were relatively minor in scale. It seems that traders haven’t ‘bought’ this cheerful narrative yet and remain skeptical – something also endorsed by the bond market, where US Treasury yields continue to crawl lower.

Looking ahead, extra caution may be warranted. With markets having broken new records again and again on signals that this phase one deal is drawing closer, it’s fruitful to ask how much upside – if any – there’s still in store once that agreement is officially completed. Is a phase one deal practically priced in by now, and are we therefore looking at a potential ‘buy the rumor sell the fact’ reaction once it’s wrapped up?

In the bigger picture, even assuming the first phase goes ahead smoothly, don’t hold your breath waiting for further progress. Phase two is where the thorny issues like industrial subsidies and forced technology transfer will be ironed out. If the two superpowers have taken months to sort out the simplest of matters like a timeline for rolling back tariffs and the scale of agricultural purchases, it’s difficult to envision any breakthrough on the complex issues.

Opinion polls are increasingly becoming the name of the game for the British pound, with a little more than two weeks to go until Election Day. Investors will get the clearest indication yet of how the outcome might look later today, when market research firm Yougov releases its highly anticipated model-based poll at 22:00 GMT.

This model-based approach accurately predicted the hung Parliament back in 2017, when most other polls had the Tories winning a significant majority. Remember, the UK’s first-past-the-post voting system means that regular nationwide polls tend to be unreliable in forecasting how many parliamentary seats each party will capture, so these models are extremely useful.

The landscape presently suggests that it’s a very close call between an outright Tory majority, or a hung parliament. Hence, the Yougov poll could swing this pendulum in one direction, pulling the pound with it. Signs that the Tories could win big would likely boost sterling, whereas signals that Labour might give them a run for their money may extend the currency’s latest pullback.

Overnight, the Australian dollar fell after one of the nation’s biggest commercial banks – Westpac – said the Reserve Bank will likely employ Quantitative Easing (QE) next year to stimulate the economy. The next market mover for the aussie will be capital expenditure figures for Q3, due early on Thursday.

As for today, there’s a flood of US data coming up, before things quiet down for the Thanksgiving holiday tomorrow. Durable goods orders, personal income and spending, as well as the core PCE price index – all for October – are on the menu. The second estimate of GDP for Q3 is also due. 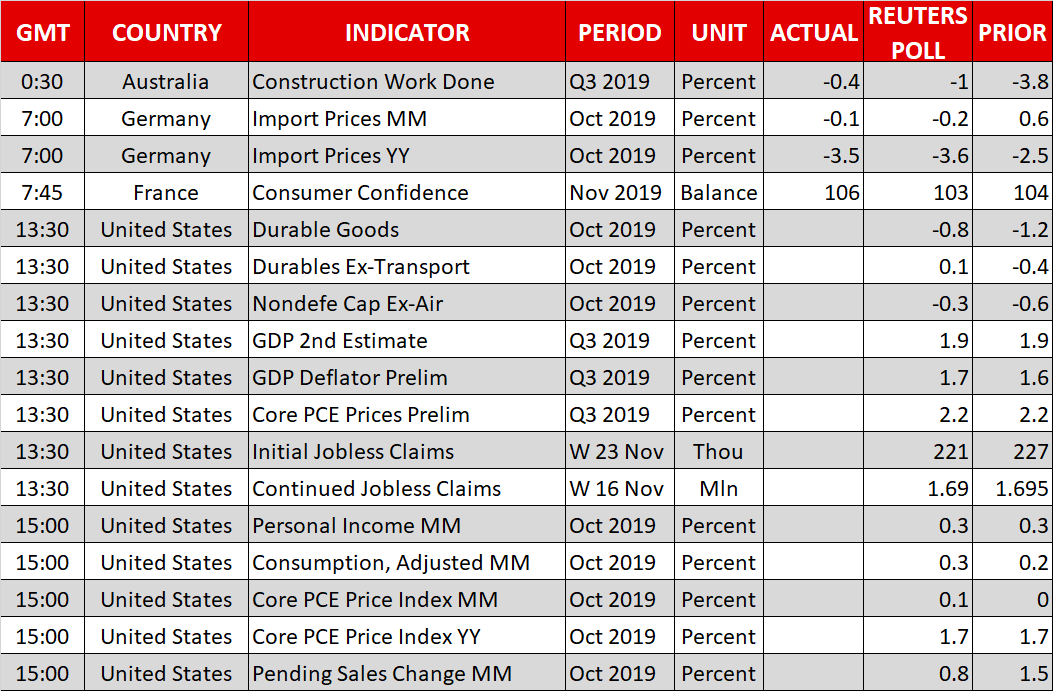